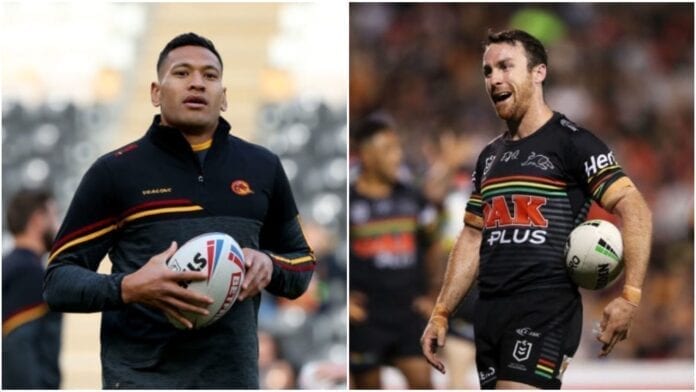 Folau joined Catalans in 2019 after being banned from Australian rugby following a homophobic post made to social media and was linked to St George Illawarra this week before the move collapsed due to fan uproar.

Maloney joined the Dragons ahead of the 2020 season after leaving Penrith and immediately looked to cause mischief when meeting Folau.

“When he first joined Catalans, he joined the players’ WhatsApp group,” Webster said.

“And Jimmy Maloney, god help him, couldn’t help himself and just started bombarding him with gay pornography.”

Following on from Folau's shock link to the Dragons this week, Maloney told The Sydney Morning Herald that the former Wallaby would make a great signing for the NRL.

“I think he would be good for the NRL, and you want the best players playing in the competition. He’d only make the NRL better,” Maloney said.

“All the boys got along with him here, and when he told us why he wasn’t coming back we all understood.”