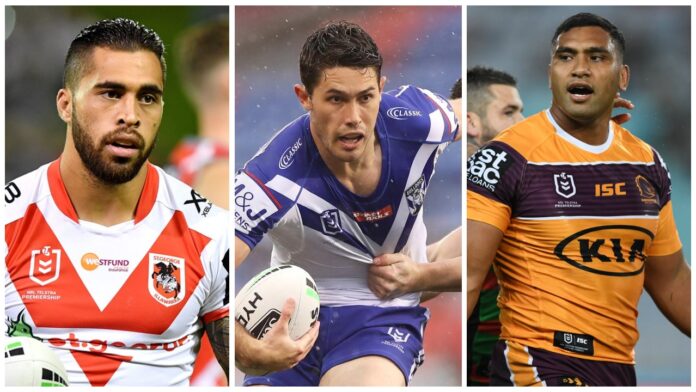 The Brisbane Broncos have secured their third signing for the 2022 season, with St George Illawarra winger Jordan Pereira reportedly signing a two-year deal with the Queensland club.

As reported by The Courier Mail’s Peter Badel, Pereira will join former Origin representatives Adam Reynolds and Brenko Lee at Red hill from 2022.

The Canterbury Bulldogs have narrowed their sights on Brisbane Broncos utility forward Kobe Hetherington, per reports from The Daily Telegraph.

With Kevin Walters signaling his intent to ‘clean house’ of his unwanted and uncontracted names after Thursday night’s 46-0 loss to the Bunnies, Hetherington could find himself departing Red Hill at season’s end due to a lack of inked paper.

The Sydney-born and Rockhampton raised forward has managed five appearances for a singular try since making his debut for the struggling Broncos in Round 11 of this season.

Matt Dufty’s options to land an NRL contract for next season are reportedly running out, with a number of Super League clubs now believed to be showing interest in the Dragons fullback.

According to The Sydney Morning Herald, English club St Helens lead the chase for the out-of-favour Saint among a number of keen suitors from the northern hemisphere.

The Origin second-rower remains unsigned for the 2022 season and has been closely linked to a return to the Broncos, a side that Bennett feels would be fitting for the 23-year-old.

The Brisbane Broncos have given permission for star forward Tevita Pangai Junior to speak with other clubs.

The Broncos released a statement on Thursday night following reports from The Australian that linked the gun second-rower to the Wests Tigers.

Despite still having 18-months to run on his contract with the Bulldogs, Dallin Watene-Zelezniak is set to depart the Belmore based club immediately, per reports from The Daily Telegraph’s Michael Carayannis.

With the 25-year-old long being linked with a move away from the kennel, the news became official on Thursday afternoon when Carayannis announced the Kiwi international would be joining the New Zealand Warriors promptly.

In big news for Storm fans, the club have stepped up their pursuit for Bulldog Nick Meaney over the course of the past few days.

According to The Courier Mail, Storm coach Craig Bellamy flew the 23-year-old to the club’s Queensland hub to offer him a deal, with Meaney off-contract come season’s end.

Warriors eyeing Lodge, Widdop to back up DWZ signing

The New Zealand Warriors have been busy in the transfer field this week and their aggressive recruitment looks to continue as two high-profile names are linked to the Auckland club.

Having already been linked to veteran playmaker Gareth Widdop, the club are also understood to have Brisbane forward Matt Lodge on their radar.

The Brisbane Broncos are understood to be considering moving on out-of-favour winger Corey Oates as the club looks to prioritise it’s youthful outside-back stocks.

Oates has played just the five games for the Queensland club in 2021, breaking into the side in Round 6 before being dropped following the Broncos’ 50-6 hammering at the hands of the Sea Eagles in Round 10.

As reported by The Courier Mail, Brisbane coach Kevin Walters was confronted by Oates recently, with the former Origin flyer expressing his frustrations in being on the outer of selection.

Finucane set to stay at Storm

As reported by Wide World of Sports’ The Mole, Finucane is tipped to reject deals to return to New South Wales that would pocket him significantly more money than what the Storm can table.

“Madge has got to improve us”: Sheens opens up on Tigers...

If your team could steal one player: Parramatta Eels

Storm prepare for life without Asofa-Solomona as surprise target emerges