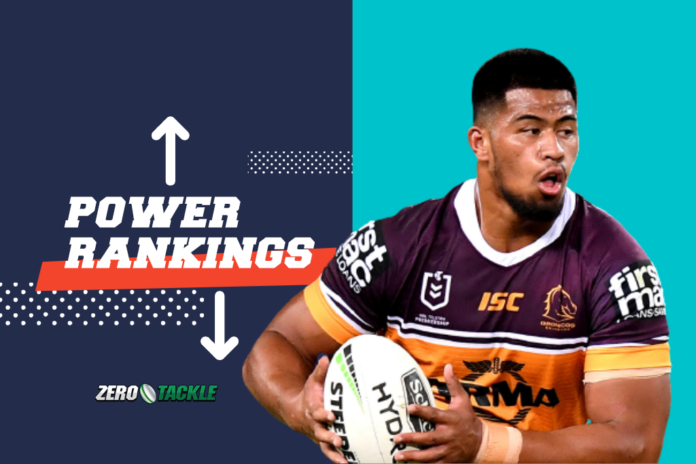 It was a weekend of blowouts in the NRL. Here are the Round 16 power rankings.

1. Storm (Last Week: 1)
Not many sides could dust the Roosters 46-0 sans their first choice fullback and hooker. This Storm side is absolutely special. Nicho Hynes and Brandon Smith are top five in their position right now.

Josh Addo-Carr is breathing fire, scoring another hattrick against young Suaalii. Dale Finucane should be being chased by ten or more clubs.

The Storm have blown past the Panthers and are Premiership favourites.

2. Panthers (2)
The Panthers managed to beat the full strength Eels without their halfback and fullback. Matt Burton's 78th minute field goal ultimately iced this game after a brilliant 80 minutes.

Apisai Koroisau was best on ground and absolutely earned his debut Origin call up. Brian To'o is a machine. He again topped the run metres with 281. Brent Naden filled in very well on the wing.

Penrith will miss Nathan Cleary, obviously, over the next month, however, will have him back well before the finals.

3. Rabbitohs (3)
The Bunnies put the Tigers away with relative ease on Sunday afternoon. The 38-22 result flattered the Tigers if anything. Cody Walker put his name in Origin discussion and was supremely unlucky to miss out.

Adam Reynolds was good but made a series of errors, including blowing an easy try, that cost him Origin. Alex Johnston can't stop scoring tries. Cam Murray and Campbell Graham are brilliant and both crossed for tries.

Two late tries aside, this was a job well done for the Rabbitohs.

4. Sea Eagles (5)
Yes, it was only the Bulldogs but this Manly side is red-hot right now. Tom Trbojevic, Jason Saab and Reuben Garrick are try-scoring machines. Toafofoa Sipley also crossed for a far less likely double.

Everyone 1 to 17 is doing their part for the Sea Eagles who now look the most likely to worry the top-four sides. Outside of the obvious stars, Morgan Harper and Brad Parker are both in career-best form in the centres.

This was a walk in the park for a far superior Manly side. Turbo was 9/10 yet again.

5. Eels (4)
The Eels fell a metre short of upsetting the high-flying Panthers. Mitchell Moses pushed a literal last-second penalty goal which would have shaken up the title race.

Isaiah Papali'i is the signing of the season, I'm convinced of it. He was again massive here and the best forward on the field. Ryan Matterson was destructive out wide and laid a brilliant platform.

Parra proved they were close to the elite of the competition but that missed opportunity may haunt them in the top four race.

6. Sharks (6)
The Sharks were everything and worse than we all expected on Sunday afternoon. Matt Moylan's late withdrawal completely ruined their flow and took their weapons away.

Shaun Johnson was unable to lead his side and was the fourth-best half on the park. Woods and Rudolf were massively outplayed by Payne Haas. They blew three tries and conceded some soft efforts.

This is why the Sharks can't make any kind of impact in the finals. Half the side didn't even look interested, which with it all to play for for says a lot.

7. Roosters (7)
The Roosters were reduced to spectators by the red-hot Storm on Thursday evening. They honestly could have played 160 minutes yet still not scored a point.

James Tedesco and Joseph Manu each had six tackle breaks yet made little impact. Sitili Tupouniua ran for 27 metres across 80 minutes. 110 running metres came from the Roosters bench.

The Roosters have fallen away from the top four. I'd say they've fallen behind Manly now also.

8. Dragons (9)
What a strange week for the Dragons. On the field, they capped on a brilliant comeback victory to beat the Warriors, yet no one will remember it given what happened off-field.

The lack of decision-making skills within this squad is shocking. Such a shame given the way Corey Norman's golden point field goal secured a victory they, for a long time, didn't look likely to secure. That Cody Ramsay try in the literal last minute was poetry.

Paul Vaughan's brilliant Friday night was undone and has put the Dragons season in doubt.

9. Titans (10)
The Titans finally returned to winning ways in the capital. AJ Brimson and Jamal Fogarty were both incredible. Fogarty had two try assists while Brimson had one and three line-break assists.

David Fifita had a performance more like that we have come to expect from the wrecking ball. Unfortunately a moment of madness may cost him Origin 3.

The Titans are capable of so much yet haven't delivered as expected. If Brimson and Fifita can continue as they did on Saturday then it's game on in terms of finals hopes.

10. Knights (11)
The Knights put forward one of the performances of the weekend on the back of the returning Ponga. He was incredible and made everyone around him far more dangerous. Mitch Pearce looked the goods also.

Dominic Young had his best game in Knights colours and crossed for a double. If Connor Watson isn't a priority re-signing then the Knights are crazy. He was so good yet again.

This is the kind of effort the Knights need to produce more often although Ponga's return has made them far more dangerous.

11. Cowboys (8)
38-0. Not the result the Cowboys wanted, obviously, but the performance was what will have the Cowboys coaching staff more than a little worried. They had nothing against a side they should have beaten.

Hamiso Tabuai-Fidow was dangerous and earned his Origin spot, but otherwise the Cowboys didn't offer a whole lot. Valentine Holmes ran for almost 200 metres but was largely ineffective.

The Cowboys have so much talent but they are way too inconsistent.

12. Warriors (12)
The Warriors were so good for 55+ minutes on Friday evening. If not for conceding a last-play try they would have been celebrating a brilliant performance and win.

Chad Townsend's moment of madness completely changed the game. Eight points up he attempted a field goal which went dead and allowed the Dragons seven tackles to go the length.

This is definitely the one that got away but the kind of game they need to win to play finals.

13. Broncos (16)
The Broncos put a few tough weeks behind them with a brilliant win over the Sharks on Sunday afternoon. Payne Haas was an absolute monster, and by far the best player on the park.

Tyson Gamble got under the skin of the Sharks and was the best half on the field. Kotoni Staggs was a huge weapon out wide and completely changed the outlook of this side.

With two big-name signings coming in and a new outlook via Ben Ikin, suddenly there's some light for the Broncos.

14. Raiders (13)
The Raiders had everything on the line on Saturday yet were bounced by an out of sorts Titans side. Jack Wighton will play Origin despite a horror performance this weekend.

Josh Papalii was a weapon in the opening 20 but received very little help from his fellow Raiders. Soliola didn't have a single run.

Canberra are a spent force in 2021. They haven't adapted to the faster game at all.

15. Tigers (14)
The Tigers managed to score 22 points yet still remain nowhere near a positive result. Their defence is atrocious and at times laughable. Adam Reynolds brain snap cost the Tigers a super embarrassing lapse.

Adam Doueihi is the side's best player and should be moved back into the halves ASAP. David Nofoaluma's stats look good but were padded by a late intercept. He was kept very quiet otherwise.

16. Bulldogs (15)
2022 can't come quickly enough for the Dogs. They were played off the park on Saturday and everyone knew it was coming.

They had some players missing but let's be serious here, they were not in this contest for one second, and weren't missing players capable of changing that.

Burton, Naden and Addo Carr. That's the focus. Trent Barrett's press conference summed it all up.