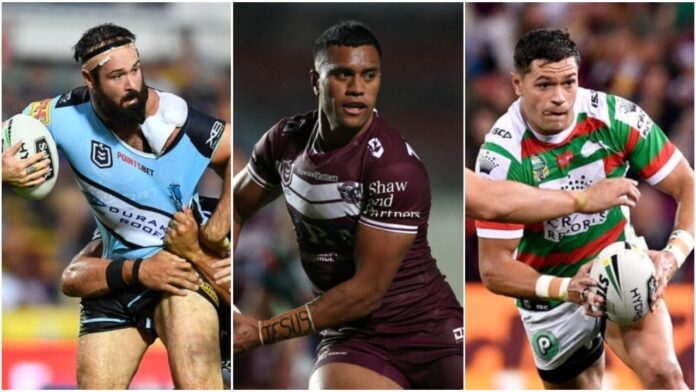 The 2021 NRL season is finally over, with clubs now placing their attention toward the off-season in order to finalise their rosters for the new year in hope of matching the Panthers' success.

Bullemor was released by the Broncos last month amid speculation Manly would be the club to secure the prop's signature.

A young gun who was an important piece off the bench for Kevin Walters in 2021, the former junior Queensland representative will arrive into a competitive middle third rotation at the Sea Eagles.

Bulldogs prop taken off the market

English prop Luke Thompson has reportedly been taken off the open market by the Canterbury Bulldogs.

Speculation surrounding the future of the prop had been rampant during the second half of the 2021 season, with other clubs rumoured to be interested in his services.

In addition to that, a number of high-profile signings, including Josh Addo-Carr, Matt Dufty, Matt Burton, Paul Vaughan and Tevita Pangai Junior have left the Bulldogs needing to shake some of their salary cap.

Axed Cronulla forward Aaron Woods is understood to be nearing a deal with the St George Illawarra Dragons for the 2022 season.

Woods was among several Sharks veterans to be notified his services would not be required under incoming coach Craig Fitzgibbon for next season, leaving his future in the NRL unclear.

The Eels and Sea Eagles are among clubs that have been previously linked to the 30-year-old in recent months, who offers 233 games of NRL experience.

Peachey was one of six Titans let go by the club at the end of the 2021 season, which included Ashley Taylor and Mitch Rein.

The Manly Sea Eagles have confirmed all of Curtis Sironen, Moses Suli, Tevita Funa, Jack Gosiewski, and Zac Saddler will depart the club at the end of 2022.

Only Sironen and Funa have their futures sorted, with Sironen heading to England to play for the St Helens Saints in the Super League, while the 23-year-old Funa will play for the New South Wales Waratahs, with the rugby union club making an official announcement on Wednesday morning.

Former New South Wales State of Origin centre James Roberts is reportedly set to be handed a last chance crack at the NRL by the Wests Tigers.

His contract with the Tigers expires at the end of the 2021 NRL season after the Tigers decided not to take up the club option in their favour for 2022, with Roberts reportedly on a figure close to $500,000 during his time in the top 30.

READ MORE: Final warning offer made to Jimmy the Jet

The Melbourne Storm have confirmed an enormous list of players will depart the club after they were knocked out in this year's preliminary final.

They are young hooker Tyson Smoothy, veteran half Ryley Jacks, 20-year-old five-eighth and Round 25 debutant Daniel Atkinson, and the South Australian Judda Turahui, who was linked with the Canterbury Bulldogs last week.

Canterbury have confirmed the signing of South Sydney winger Braidon Burns to a two-year deal.

Burns' signature is the 10th signing for the Bulldogs ahead of the 2022 season, with a bevy of star names venturing to Belmore next year.

Burns brings 40 games of NRL experience to Trent Barrett's aid for next season, having played as a supporting role for the Rabbitohs across the past five seasons.

South Sydney youngster Brock Gardner is tipped to depart Redfern this off-season in favour of a move to the Raiders.

Gardner, who missed the 2021 season with an Achilles injury sustained early in the year, is believed to be in the sights of Canberra ahead of next season.

With the Raiders looking to bolster their attack, Gardner is believed to be on the move to the nation's capital, according to Wide World of Sports' The Mole.

Rivals in the running for Eels second-rower

The New Zealand Warriors are reportedly first in line to secure Eel Marata Niukore for season 2023 should things fall into place for them.

The 25-year-old was rumoured to already be speaking to a host of rival clubs in the run-in to the November 1 deadline, however, a name has now been put to a potential suitor.

Niukore is a player that Parramatta wish to keep, but their priority as of current is with the likes of Clint Gutherson, Junior Paulo and Reed Mahoney amongst others.

A revelation at the back end of the 2021 season, Metcalf came into the Sharks side and immediately starred in the halves.

According to an The Daily Telegraph report, Metcalf is almost certain to sign on with the New Zealand Warriors for 2023, however, the club want him to join in 2022.

FULL STORY: Metcalf gaining interest from across the Tasman

The New Zealand Warriors have officially released prop Kane Evans from the remainder of his playing contract.

The 29-year-old had originally signed a two-year deal with the Warriors following his time at the Parramatta Eels. He was due to remain at the club until at least the end of the 2022 season.

However, a statement released by the Warriors on Friday morning confirming the release of Evans said that he had been released by mutual consent to chase opportunities in the English Super League.

Nene Macdonald would appear to be on the cusp of signing a deal with yet another NRL club.

The 27-year-old winger with 98 games of first grade experience under his belt will this Sunday play the Queensland Cup grand final with the Norths Devils.