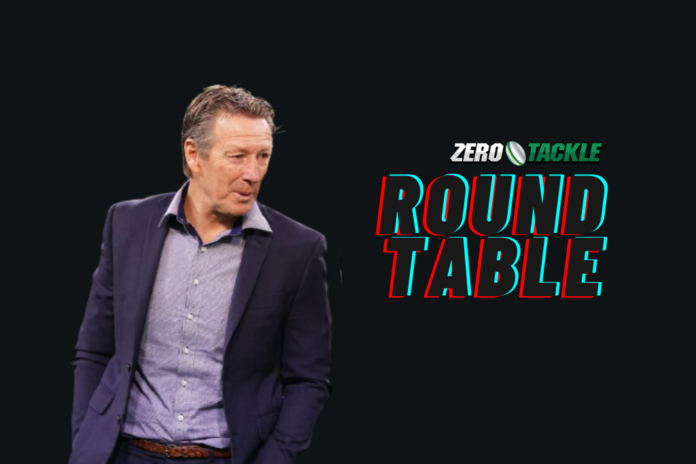 If given the opportunity to have or join three Rugby League personalities over for dinner, who would you select?

Are you looking for a knock about larrikin to have a couple of drinks and a chat with?

Or would you use your time valuably and learn a thing or two from that person's past and allow them to elaborate on how they reached their stardom.

The Zero Tackle team have given their thoughts below.

Tommy Raudonikis: Tommy's the type of person who has achieved so much in his life, however if you were to meet him one-on-one you'd just think he's your average knock about bloke.

During his days as head coach of the Western Suburbs Magpies he spent a lot of his free time at the Court Tavern in Campbelltown, where he was simply just another one of the locals.

I'd love to sit down with him and listen to everything he has to say from a player's and coach's perspective. Moreover I find Tommy's story so interesting. I'd love to listen to Tommy talk about his upbringing inside a migrant camp in Cowra, his competitive spirit not only as a player but as a coach as well.

Either way I wouldn't be able to resist asking him about the famous cattle dog call.

Then after dinner I'd like to go to the nearest pub with Tommy, put a few bets on with him and listen to him chew the fat all night.

Adrian Morley: In my personal opinion Adrian Morley is one of the toughest and hardest players to have ever played Rugby League. He was the first British player to have won a Super League and NRL title.

I'd love to talk to Adrian about what made and developed him into becoming one of the most brutal and feared players globally. To add to that I'd like to talk to him about his transition from Super League to NRL and ask him about the main differences between the two. Seeing that he himself is such a hard man I'd love to have the opportunity to ask him about players he was intimidated by (if there were any) and the time he was sent off after 12 seconds.

It's no secret that Australians aren't the biggest fans of English athletes in any sport and with this I'd ask Morley if he felt that he always had a target on his back during his NRL career because he was such a well renown English player.

Furthermore Morley is well known to spin a good yarn over an ale (if you can understand the accent) and listening to some of his best tales on and off the field would be an absolute pleasure.

Brandon Smith: The bloke is a deadset character. Hailing from the beautiful Waiheke Island in New Zealand's North, he's proven to be not only one of the biggest personalities in the NRL but one of the top hookers.

I'd simply love to observe 'Cheese' at the dinner table and see what sort of mischief he gets up to. Additionally would love to talk to him about leaving New Zealand at the age of 14 to pursue a career in the NRL.

Rugby League has missed people with the good old fashioned larrikin attitude, Cheese and his mates at the Melbourne Storm are slowly bringing it back and that sort of energy around a dinner table is something I wouldn't want to miss.

Reg Gasnier: One of the Dragons' best ever players, and a prominent member of the 11 premierships in a row, playing in over half of them. It's a record never likely to be broken. It would be fantastic to get some insight into that era and just how the Dragons became so successful for such an extended period of time.

He is widely recognised as one of the best ever centres to lace up a boot, so would love to get some insight into what made him so good, and how he dealt with the pressure of captaining Australia on many occasions during an era where professional sport didn't exist.

Arthur Beetson: I'm not a Queenslander, but Beetson is the guy widely credited with the State of Origin concept and why it exists as it does today. He was obviously as hard-nosed as they come on the park, but some of the tales he could tell about the formation of Origin, and that first night at Lang Park would be outstanding.

He also coached post playing with relative success, so would be intriguing to understand his mentality behind what made players tick, especially at representative level.

Cameron Smith: I regard him as the best captain to ever play the game, and if not, then certainly in this era. He revolutionised the game as it is played today in the dummy half role and was also part of an Origin dynasty, while having enormous success at club level.

His insights into Melbourne's salary cap scandal would be quite unbelievable, as well as what it was like to play 2010 for no competition points. He gets a bad rap for some of his on-field match management, but there can be no disputing how good he was, and his future immortal status.

As a Bunnies fan, my trio has a distinctly cardinal and myrtle theme.

Michael Cleary: Outside of pulling on a Souths jersey on 140-occasions, Cleary also had a career as a Wallaby, a male model, a politician and a wrestling commentator. With this in mind, I'm sure he'd have plenty of yarns to spin.

Ian Roberts: As the only openly gay man to have ever played first-grade football, Roberts' story is already one worth listening to. As someone that also has a career as a professional actor and is such an ardent fighter for a myriad of fantastic causes in society, like Cleary, I'm certain that Ian would have a tale or two up his sleeve.

John Sattler: My final dinner guest needs very little introduction, but as someone who was as hard as nails on the field for nearly 200 first-grade games and quite literally bled for the club, there was no way I was ever going to pass up a chance to have a seat with 'Satts'. The great man reportedly fell out with the club when Russell Crowe became the master and commander of the Rabbitohs' ship, so I would love the opportunity to pick the Kurri Kurri king's mind and understand how he sees things in the present day.

Craig Bellamy: The most successful NRL coach of the modern era and just a huge enigma for fans really. If he's not blowing up deluxe in the commentary box when the Storm are only up by 30, he's turning another teams trash into treasure.

Would love to sit down with him and get an insight into what makes him tick and how he uses that to inspire the players he coaches to exceed all expectations. Would also love to know what he really thinks of Brandon Smith!

Peter Sterling: I tossed up guys like Brad Fittler, Andrew Johns, Cameron Smith etc as all legit massive stars in the time I've watched the game but instead went back a little bit further.

As an Eels fan, sitting down with the legend Peter Sterling and having a beer would be something else. Would love to pick his brain on what he thinks of the NRL has become (without his employer watching) and what he really thinks about the Eels these days. Would also love to know why he has never stepped up and had a crack at coaching.

He seems like he really knows the game and players. Perhaps he's too smart to step into the fire that is coaching NRL.

Fletch/Hindy: I've cheated a bit here and combined the two larrikins together but over the past few years, they have been pretty much inseparable on TV as part of the Matty Johns entourage.

I've no doubt that hanging our with these two (even just for a few hours) would lead to plenty of laughs and some epic stories. I mean, the pair of them reveal some pretty wild stuff on TV, so imagine what you could get out of them at the pub!

Wally Lewis: The great man and arguably the greatest ever. Lewis has done it all and would have the stories to cover the entire evening himself. From his representative playing days, to his coaching feats and everything else outside and in-between.

Craig Bellamy: A man that is followed by success. When he speaks, you listen - and im sure he'd have PLENTY to say.

Brandon Smith: Who would possibly want to miss out on an evening with 'The Cheese'. The league's larrikin, Smith has sky-rocketed into consideration as the NRL pest among his own teammates. Having him and Bellamy beside each-other would be enjoyable viewing once again

Andrew Johns: Entertainment and footy stories.  No one would be more fun than the immortal and best half I've ever seen

Nicho Hynes: The next superstar of the game and future Sharks legend. I want an autographed photo before he gets too big.

Maddie Studdon: My favourite NRLW player and the most hilarious current league player