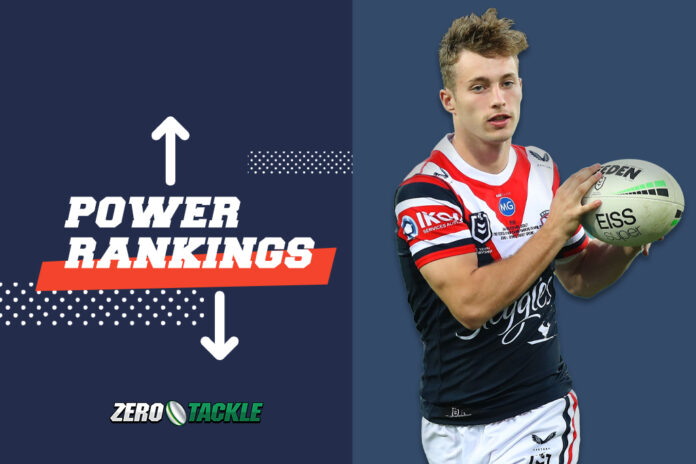 With the completion of Round 25, we say goodbye to eight sides. We sign them off below and focus on the finals. Bottom eight sides, where did your season end on our rankings? Top eight, where do you sit heading into the finals?

The one issue the Storm had, the form of Ryan Papenhuyzen, was done away with on Friday evening with a brilliant hat-trick of tries.

2. Penrith Panthers (2)
Penrith fell points differential short of retaining their minor premiership. They have momentum heading into the finals after a huge win over an understrength Eels.

Nathan Cleary, Brian To'o, Matt Burton, James Fisher-Harris, Viliame Kikau. This is a scary side capable of anything.

The Panthers enter heavy favourites against the Rabbitohs this weekend. This could be a relative shootout but everything is going right for the Panthers.

3. South Sydney Rabbitohs (3)
The Bunnies managed to put the Dragons away despite fielding a below strength side. The perfect result for a side very capable of big things this season.

This side can pile points on for fun but their defence falls well short of the top two. That worries me come finals time.

They enter their preliminary rematch with the Panthers as outsiders. If Latrell Mitchell was there I could see an upset but their best bet is catching the Storm in this year's preliminary.

4. Manly Sea Eagles (4)
Tom Trbojevic. My word. Are we seeing something special here or what? The Sea Eagles were ordinary, again, until Turbo flicked the switch but once he did, they were untouchable.

I'm loathe to frame this as coming down to one player but if Mr Trbojevic turns up at his very best, there aren't many sides who can stop him.

Manly have the forward pack and the points in them to run riot in the finals. This could be an all-time story.

5. Sydney Roosters (7)
The Roosters reminded everyone that they're still to be taken very seriously in this upcoming title race despite a huge run of outs due to injury.

James Tedesco is at top form, which is frightening for any opponent. The forward pack is bossing people and three young halves are playing well beyond their years.

The Roosters face a very tough contest with the Titans but have more than enough strike power to set up a mouth-watering semi-final clash next weekend.

6. Parramatta Eels (6)
I almost had the Eels at five here despite their loss this past weekend. I honestly think the Eels can do more damage in the finals than the Roosters, if they get past the Knights.

Parramatta could very well come out and put 40+ on the Knights. Or they could come out and be the only favourite to lose this weekend.

This week's result will completely define the Eels 2021. If they lose then the brilliant results they produced will be for nothing. If they win, they can cause a real boil over next weekend.

7. Gold Coast Titans (10)
The Titans flew into a finals series they should have qualified for weeks ago, with a ten out of ten performance on Sunday afternoon. They'll be confident they can cause an upset this weekend.

Young Jayden Campbell is a revelation at the back. David Fifita has taken criticism personally and has returned to his monster ways.

They will start as outsiders against the Roosters but have the side to worry any side outside of the top four.

They achieved neither. Both Pearce and Ponga were named, played yet withdrawn just after halftime.

Can they beat the Eels this weekend? I'd say they're the most likely to cause an upset yet, by far, the least likely to worry the bounce back side in week two of the finals.

9. Cronulla Sharks (8)
The Sharks missed out on the finals by points differential after watching the Warriors fall to pieces against the Titans. Truthfully though they have only themselves to blame.

People will be quick to blame the John Morris sacking for the Sharks failure to qualify for finals but I believe the blame lays in the middle.

Tackling practice for the Sharks in the offseason.

10. Canberra Raiders (9)
Canberra's season ended with an absolute whimper as they copped a hiding to the Roosters. Ricky Stuart could only watch on in horror as his side forgot how to rugby league.

A series of horrors and a night of missed tackles confirmed what we already knew from weeks ago; the Green Machine are long gone.

Brisbane will finish 14th but will be much happier than many of the sides who finished above them. The big win over the Knights ends their season on a high.

Two wins in their last three games provide a positive launchpad for what should be a far improved 2022 season.

Payne Haas's injury was hugely unfortunate but this should be a brilliant off-season otherwise given the players arriving on November 1st.

12. New Zealand Warriors (11)
The Warriors ended their season in the most horrible of circumstances. They fell apart in an absolute heap with pride on the line.

Matt Lodge let himself and the club down in a huge way. Kane Evans seems more interested in shadow boxing than playing Rugby League.

Plenty of questions to answer. I'm not sure Nathan Brown is up to it.

13. Wests Tigers (13)
The Tigers completed their season as they played their season; awfully. They sat and watched the Bulldogs run riot. The distant 16th placed Bulldogs.

Not one of those Tigers players deserves match payments for their 'efforts' on Sunday.

I expect plenty of changes over the off-season in Tiger Town but this ridiculous internal review is not one.

The Cowboys were brave. Truthfully they were pasted by a Manly side who reduced them to fodder on a highlight reel.

A horrible season for the Cowboys came to an end in fitting circumstances.

I'm not sure the $800,000 a year signing of a halfback dropped by the Sharks is going to turn around their fortunes.

Well, I certainly did not see this coming. The Bulldogs signed off a horrible 2021 season with a marvellous win that should help usher in a new era.

They played some incredible football I forgot they were capable of. It won't undo the wrongs of a wooden spoon season but a brilliant win all the same.

The Dragons lost to a NSW Cup quality Bunnies side. Their eighth loss in a row.

They also told one of their best performers to look elsewhere next season. The same player not invited to the infamous BBQ because they knew he would set those players straight.