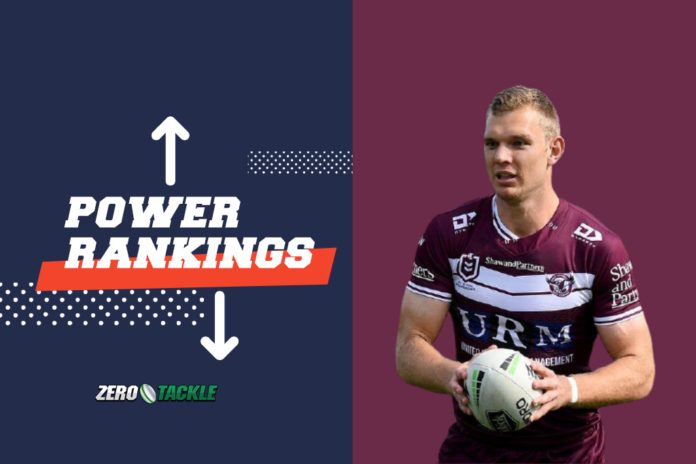 With seven results going the way we thought and only the one, close upset, the rankings have remained unchanged. We look at where each team sits heading into round 20.

1. Melbourne Storm (Last Week: 1)
The Storm may be absolutely flying in terms of the premiership race but they were flat and pushed all the way on Friday. The 20-16 result was far closer than expected.

Focusing on the positive though, Ryan Papenhuyzen returned to the game and looked sharp despite being kept quiet. Josh Addo-Carr scored a double with Justin Olam and Reimis Smith adding tries.

If they can beat the Panthers this upcoming round then they're home and hosed in terms of yet another minor premiership. Still have Harry Grant and Cameron Munster to return. Yikes.

2. Penrith Panthers (2)
No one expected the game we saw from the Panthers on Saturday night, but competition points are really all that matter right now. That first half though was dire from Penrith.

Leading 18-0 this game looked well in control but a few defensive lapses lead me to believe they may have had one eye on next Saturday's game at Suncorp instead.

Dylan Edwards lead the way with 269 metres. Unfortunately, injuries to Brian To'o and Tyrone May add to their woes heading into the minor premiership shootout with the Storm.

3. South Sydney Rabbitohs (3)
The Bunnies continue to mount a serious case to be considered the Storm's biggest challengers. A very comfortable 60-22 win over the Warriors was fun to watch.

Cody Walker is the key heading into the finals but he has a wonderful supporting cast. I love everything about this Bunnies side.

4. Manly Sea Eagles (4)
Manly are well in and truly in the groove and continued their run to the finals with a 44-24 victory over the Tigers. The game probably wasn't as commanding as the scoreline suggests but this was comfortably Manly.

Tom Trbojevic had a quiet game, only running for 327 metres with two line breaks. Freak! Morgan Harper crossed for a hat-trick in what may have been his best performance to date.

Daly Cherry-Evans crossed for a double and is starting to look back to his magnificent best. A series finals run is on the cards here.

5. Parramatta Eels (5)
The Eels were the only favourites beaten this weekend. The 12-10 loss to the Raiders isn't overly alarming but the loss puts them behind in the race for third.

They were only a Maika Sivo step away from winning this on the very last play so they won't be penalised here. Mitchell Moses aside, they're in good shape injury-wise.

You get the feeling the Eels title charge is going to be built upon their incredible forward back. Dylan Brown needs to step up to secure a top-four finish.

6. Sydney Roosters (6)
The Roosters are quietly putting together one of the underrated seasons of all seasons. They will play finals footy despite an injury list the likes I've never seen.

Sitili Tupouniua, Angus Crichton and Victor Radley were all irresistible. They all won their battles by wide margins and set the scene for their side.

The Chooks are right in the running for a late charge at a top-four spot. Unheard of considering their growing list of unavailable players.

7. Cronulla Sharks (7)
The Sharks moved to seventh thanks to a big win over the Bulldogs. Despite the 44-24 scoreline, it was hardly the best performance from a team who forgets how to tackle sometimes.

Siosifa Talakai, Toby Rudolf and Briton Nikora were all big performers. I'd argue Nikora was best on ground.

Shaun Johnson's injury looks to have ended his season and will make the Sharks run to the finals more difficult. Over to you Tricky and Tracey.

8. Canberra Raiders (8)
The Raiders did their finals hopes the world of good with a shock win over the Eels on Thursday night. The 12-10 win was confirmed via a last-minute tackle from Jordan Rapana.

The win proves that Canberra want and are capable of a top eight finish. Rapana was incredible, Corey Harawira-Naera has emerged as one of the in-form forwards while Hudson Young tackled himself to a standstill.

Canberra are looking ominous and I dare say look best placed for a top 8 finish. If they beat the Knights this weekend, they're in the box seat.

9. Gold Coast Titans (9)
The Titans kept their top eight hopes alive on the back of a player on debut and a player who was benched and seemed to take it personally.

Young Toby Sexton started his NRL career with a brilliant performance. He can do it all. Meanwhile David Fifita entered the game from the bench and reacted as you would have hoped.

Look as though they're in a shootout with the Raiders and Sharks for spots seven and eight. They have the squad to do real damage.

10. St George Illawarra Dragons (10)
The Dragons have only themselves to blame for being dragged into a scrap for a top-eight spot. They lead the Raiders only on points differential now.

They named a side missing several stars against the Bunnies and can probably expect a rough evening. Again, through their own fault and bad decisions.

11. Newcastle Knights (11)
I've stated the past three works that the Knights are done in terms of a top-eight finish and I saw nothing on Friday evening to suggest otherwise.

They were easily outplayed by a Roosters side missing seemingly 100 starters. Jacob Saifiti celebrated signing a contract extension with a try early on.

Kalyn Ponga is largely playing a lone hand in attack. They're down troops but even at full strength they don't beat the Roosters.

12. North Queensland Cowboys (12)
This was the Cowboys best performance, and effort, in well over a month. Ok, they ultimately missed out on the competition points but they pushed the Storm all the way.

Kane Bradley's 74th minute try set up a nail-biting finish but it was not to be. Murray Taulagi continues his impressive run. The Cowboys are moving to re-sign the youngster.

Taumalolo leads the way up front but did not receive anywhere near enough in terms of support from his fellow forwards. Finals look a long shot at best from here.

13. Wests Tigers (13)
The Tigers just can't produce consistently. Coming off a brilliant win over Brisbane they had momentum but were routinely spanked by a far superior Manly side.

They did cross for four tries, which should put you in any game. Adam Doueihi is a genius footballer and set for a monster future.

Positively, Jacob Liddle and Daine Laurie both continue to produce. There are positives here but the finals are gone.

14. Broncos (14)
This was much, much better from the Broncos. They pushed the Panthers all the way in the final ten minutes and really threatened.

Unfortunately, they started slowly and didn't trouble the scorers until the final 15th minutes. That said Payne Haas was arguably the best player on the field and is now the game's elite prop.

Brisbane's top eight chances fell by the wayside a long time ago but they look to have more than enough to stay off the bottom of the table.

15. New Zealand Warriors (15)
Unfortunately, the Warriors season continues to wind down in disappointing fashion following yet another massive loss. The 60-22 result ends their season in terms of finals chances.

Roger Tuivasa-Sheck will play one more game for the team he has represented so wonderfully over the years before heading home and switching codes. Thank you RTS.

The future looks good for the Warriors but they'll be without their prop pairing this weekend and face a long month and a bit.

16. Canterbury Bulldogs (16)
The Dogs have signed some incredible, future-shifting players for 2022 and beyond. Unfortunately, 2021 seems to be dragging for those in blue and white.

They had their moments against the Sharks but ultimately copped 44 points from a struggling side. Luke Thompson was 9/10. Taking a point off for his moment of madness that saw him binned.

The Dogs need to show something in 21 for their fans.