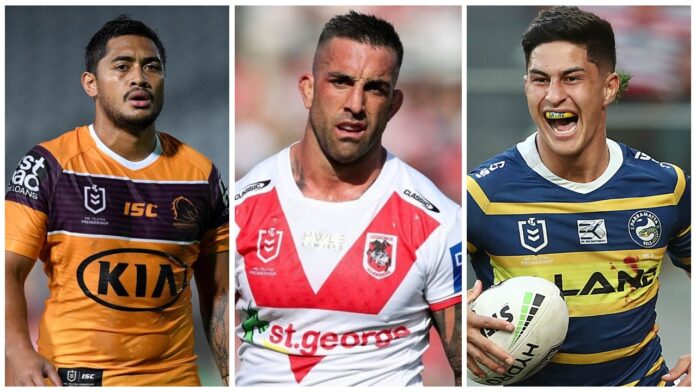 With less than a month remaining for clubs to finalise their squads for the back-end of the season, NRL clubs are placing the transfer market into a frenzy.

In the past week, the Dragons, Broncos and Bulldogs have been in the transfer spotlight, among several other sides already preparing list management calls for the upcoming August 1 deadline and beyond.

Canterbury have emerged as a possible new home for former Dragon Paul Vaughan.

Vaughan was sacked last week by the Dragons after he hosted a party at his house with a number of Dragons players despite Greater Sydney's lockdown rules preventing such gatherings.

Dragons’ outside back set for second stint overseas

The Fijian international, who has played nine games for the island nation to go with his 45 NRL appearances and 77 English Super League appearances, has made the decision to hop codes. He will join Perpignan

The St George Illawarra Dragons have taken a step to ensure they handle their period of mass suspensions this morning, announcing the short-term signing of Jamayne Taunoa-Brown.

The Warriors' youngster will be with the Dragons from today until the end of July as the club and competition relocates to Queensland.

Reports have emerged both the Parramatta Eels and Manly Sea Eagles have entered a two-way fight for the immediate services of Cronulla Sharks' prop Aaron Woods.

It's understood that Woods won't be offered a new contract to stay in the Shire at the end of this season, and he is exploring his options elsewhere.

At least two NRL rivals are reportedly showing interest in Parramatta five-eighth Dylan Brown for the future, per The Australian's Brent Read.

According to Read's report, the 21-year-old is gaining interest from a number of clubs, with interested suitors likely to come calling from November 1 - as the Eels half remains contracted until the end of next season.

Croft confident about remaining at Red Hill despite signings for 2022

Brisbane halfback Brodie Croft has admitted that recent changes at the Broncos have left him feeling under pressure as his future at the club remains clouded.

The 15th placed Broncos have won just four games this season and suffered a humiliating 46-0 loss to the Rabbitohs last month, which led to the immediate departure of general manager of football Peter Nolan and head of performance Andrew Croll.

Gold Coast Titans' utility Tyrone Peachey is reportedly keen to test his market value and a potential move to the English Super League.

English publication Yorkshire Live are reporting that Peachey's management have reached out to Super League clubs in the last week, despite the Titans attempting to hold onto their own version of Mr Fix It.

Bulldogs’ half reportedly on the outer as Barrett’s revamp continues

Lachlan Lewis is reportedly on the scrapheap at Belmore as the Canterbury Bulldogs continue to revamp their roster.

Despite being called into the side at the last minute for last week's game with the Sydney Roosters, where he replaced Kyle Flanagan, reports suggest Lewis won't be offered a new deal to stay in blue and white into 2022.

Canterbury centre Will Hopoate is reportedly nearing a move to the Saints, but it won't be with St George Illawarra.

The off-contract Bulldog has been closely linked to the Super League, with reigning champions St Helens understood to be nearing agreement on a two-year deal, according to The Daily Telegraph.

English Super League side Wigan have completed the signings of Kaide Ellis and Patrick Mago.

The Daily Telegraph is reporting the pair have signed three-year deals and will head overseas in 2022.

St George Illawarra are understood to be ramping up their bid to land Melbourne veteran Dale Finucane.

As reported by NRL.com, the Dragons could utilise their Paul Vaughan-sized void in both their squad and salary to move for Finucane's signature.

Future at Concord in doubt for Tigers veteran

Wests centre Joey Leilua's future at Concord looks to be fading, with the hard-nosed outside-back left out of the Tigers' 30-man squad that has ventured to Queensland.

The Tigers - along with the rest of the Sydney sides, Knights, Storm, Warriors and Raiders - packed their bags for a trip north of the Tweed to keep the 2021 season alive.

Walters and Son: How the Broncos have once again become the family club

With the chess pieces moving rapidly at Red Hill, Brisbane Broncos coach Kevin Walters has made a signing that is dear to his heart.

According to Fox Sports, the first-year coach and club legend has signed his son Billy from the West Tigers.

Although it is known that Anthony Milford won't be a Bronco next season, his future home is still up in the air.

According to the 27-year-old's management, the Queenslander will play in the NRL next season, with reports stating that a move to the English Super League is not on the cards.

Despite having his rich deal shredding by St George Illawarra, suspended forward Paul Vaughan looks almost certain to go from the doghouse to the kennel by joining the transfer happy Bulldogs.

However, before Vaughan can sign on the dotted line and trade his red and white jersey for a blue and white one, the Belmore club has reportedly asked the NRL to clarify the 30-year-old's suspension circumstances.

Unwanted Bronco Tevita Pangai Jr is still yet to commit to any of his current suitors.

Journalist Brent Read has stated that Wests and Canterbury were still in the race for the 25-year-old's signature, but that they had both been made to wait longer than expected.