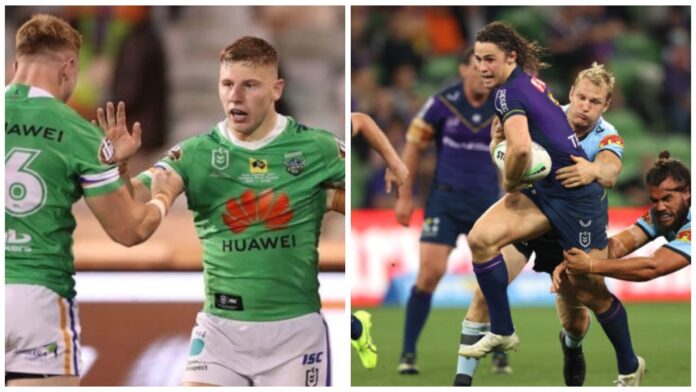 The shock release of George Williams is sure to open up the Raiders' budget to pursue a successor for their departed halfback.

Canberra announced on Tuesday that Williams will leave the club with immediate effect after ongoing requests to seek a move home to England on compassionate grounds.

According to The Daily Telegraph, Williams' departure is set to free up close to $250,000 for the remainder of the 2021 season, with another $750,000 opening in the books for next year.

This is getting spicy 🌶 #NRLhttps://t.co/dr0Jv2blc5

While the Raiders are set to back in second-string veteran halfback Sam Williams for the time being, the club are sure to enter the busy open market for high-profile playmakers.

The signatures of Adam Reynolds, Jarome Luai, Chad Townsend and Tom Dearden have already been secured for 2022, but a host of ready-made names are yet to know their future past this season.

Versatile Melbourne Storm speedster Nicho Hynes is seen as the most coveted player in the open market and has shown plenty of promise in the halves while also expressing his desires to land a starting role in the NRL.

Corey Norman, Ash Taylor and Shaun Johnson are also yet to recommit for the future and could find themselves of interest to Ricky Stuart and co.

Williams' departure has also opened up speculation around the future halves partnership at Wests Tigers as the English international is linked to a return to Wigan Warriors.

The Super League side currently have incoming Wests import Jackson Hastings on their books, with some belief surrounding a potential early release to the Tigers could come to fruition should Williams return to the Greater Manchester club.

Hastings' arrival is sure to spark questions over the future of Wests half Luke Brooks, who has previously been on the radar of keen NRL rivals.