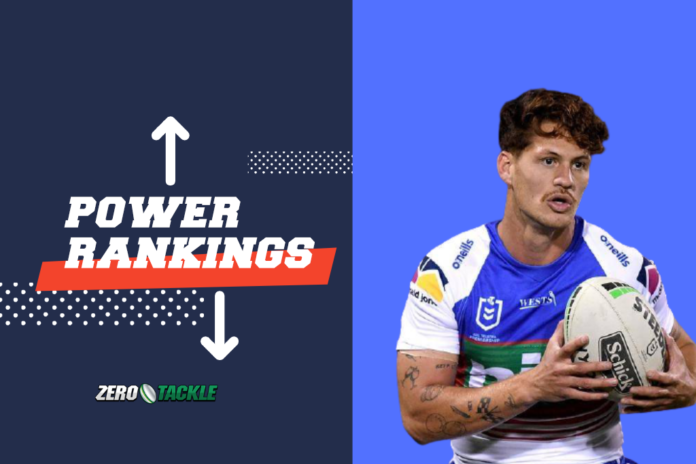 There are just four weeks left in the NRL season, and the race for the finals is well and truly on. Here are this week's power rankings.

1. Melbourne Storm (Last Week: 1)
The Storm have beaten their two closest rivals in the Panthers and Sea Eagles across the last fortnight. The gap between the Storm and the rest is massive.

Melbourne certainly didn't have it all their own way in the 28-18 win but I'd also argue they never really look tested either.

Justin Olam is now the game's best centre. Jahrome Hughes overtakes Daly Cherry-Evans as the second best seven in the game. Papenhuyzen is looking better and better with each game.

2. South Sydney Rabbitohs (2)
The Bunnies further cemented their status as the second-best side in the competition by tearing fellow top-four side the Eels to shreds.

Cody Walker and Latrell Mitchell were each other worldly on Friday night. Walker is having a Dally M season.

Josh Mansour crossed for a double and ran for over 250 metres. There's no weakness in this side. All the stars are firing.

3. Penrith Panthers (3)
Penrith bounced back from last week's performance by holding off the Roosters. Matt Burton was close to perfection in leading his team to a 20-14 win.

Dylan Edwards did everything to silence the doubters with a game-high 212 running metres. Burton though was the man, matching the 212, making three line breaks and crossing for a double.

Penrith are a few key returns from matching the Bunnies and Storm but with troops coming back, it's game back on!

4. Manly Sea Eagles (4)
I said last week that Manly were the side most likely to beat the Storm. I absolutely stand by it after they pushed the Storm further than any other side.

The 28-18 loss shows the gulf between the sides, however they showed enough here. Turbo was largely kept quiet but was still top three on the field.

Reuben Garrick continued his magical season and scored a double. Plenty to like here. They'll almost certainly finish in the top four.

5. Sydney Roosters (5)
The Roosters went try for try with the Panthers, with only kicking from tee and a few penalty goals separating the teams.

Joseph Manu has been a giant in the past few weeks. Victor Radley has been right there with him. Tedesco seemed in everything on Saturday despite not looking at his best.

The Chooks have a massive chance to head into the top four with a game against the Broncos this weekend. Hard to believe they're where they are considering their injury crisis.

6. Parramatta Eels (6)
The Eels slide is well and truly on. How they remain fourth after this weekend is down to pure luck. They have two weeks to turn it around or face a first-week bounce from the finals.

The 40-12 loss to fellow top-four hopefuls the Rabbits has fans worrying. They largely held the ball and missed less than 30 tackles but offered very little in attack.

With $2 million of talent off-contract there are plenty of questions ahead. They're massive outsiders against Manly this weekend. Surely a must-win.

7. Gold Coast Titans (7)
The Titans went a long way to securing a return to the top 8 by bashing their Queensland counterparts the Cowboys senseless. The 36-14 score-line really represented the difference in the sides.

Ashley Taylor is in the best form he has shown in literal years. This will have plenty interested in him when not so long ago he looked bound for England.

AJ Brimson, Toby Sexton, Tino Fa'asuamaleaui and David Fifita were all massive. Brian Kelly crossed for a double. Everything is coming good at the right end of the season on the Gold Coast.

8. Newcastle Knights (10)
Newcastle. I almost forgot about Newcastle. They reminded us that they're right in this top eight chase with their second straight win. This sets up a huge game against the Sharks.

They'll face bigger tasks than the Broncos, however all the stars stood up here. Ponga and Pearce were brilliant while Daniel Saifiti and David Klemmer set the tone.

Their contest with the Sharks on Sunday is season-defining. If they win, they look close to home in terms of a finals finish. Huge week.

9. Canberra Raiders (9)
Canberra bounced back from last week's shock loss to beat the Dragons. The 20-12 win was hardly vintage Green Machine but the must-win was job done.

Jordan Rapana is leading the way from the back. His move to fullback has legit revitalised his career. Tom Starling is the best bench player in the competition right now.

With three very difficult games in the final month the Raiders face an uphill battle. Nothing shown here suggests they have it in them.

10. Cronulla Sharks (8)
Awful. This Sharks side is a dead set laughing stock. Two points down with a penalty pretty much in front and rookie coach Josh Hannay overruled Aaron Woods to decline the easy penalty goal.

Will Kennedy is one of the form players of the competition and kept the Sharks in this will individual brilliance.

The Warriors walked through the Sharks middle. Will Chambers had us all laughing but then missed the one on one tackle that directly lead to a loss.

Josh Curran was exceptional. AFB and Matt Lodge were dominant in the middle and brushed aside their Shark counterparts.

Reece Walsh had more than enough quality to take advantage of his forwards domination. DWZ showed a turn of pace I forget he had.

12. St George Illawarra Dragons (11)
The Dragons season has absolutely petered out. Their loss to the Raiders just confirms what we already knew, that they're not top-eight worthy.

Jack Bird has been very good this season but he is not a fullback. Tyrell Sloan, if fit, should be the one for this season and next.

The Red V play Penrith this weekend, which should officially end their season. What a horror show for a season that promised so much.

13. Wests Tigers (15)
The Tigers kept their season alive, technically, with a win over the Bulldogs on Sunday afternoon. The 28-16 win was hardly a blow away performance but the result is everything.

Adam Doueihi was again in their top two players on the field. Luciano Leilua had his best game this season and was near impossible to stop.

With three very winnable games in the next month, perhaps we all wrote the Tigers off too early?

14. Brisbane Broncos (12)
The Broncos may have let their best hope of recording back to back wins this season slip by losing to the Knights. The 28-20 result largely sums up their season.

At times they were super entertaining, at others they were dire. Tesi Niu has a massive future ahead of him. I hope it's at the Broncos.

Herbie Farnworth is a genius out wide and has surely nailed down that centre spot. Payne Haas needs more help up front.

15. North Queensland Cowboys (14)
The Cowboys are limping to the end of the season without a whimper. Todd Peyton is fast losing the support of fans and seems to have no idea re his stars.

Jason Taumalolo has been reduced to a bit part second rower and will now likely miss the rest of the season. Deardon and Holmes has their moments though.

The Top 8 is gone, six weeks ago truthfully, and now it's all about pride.

16. Canterbury Bulldogs (16)
The Dogs showed some fight over the past two weeks that seemed to be missing. Ultimately they fell 28-16 to the Tigers but were right in this.

Nick Meaney is a big loss for the club in their rebuild. He was great on the weekend with 182 run metres, a line break and a try.

Jack Hetherington was hard done by but really has no one to blame but himself. Jake Averillo looks certain to partner Burton in the halves next year.