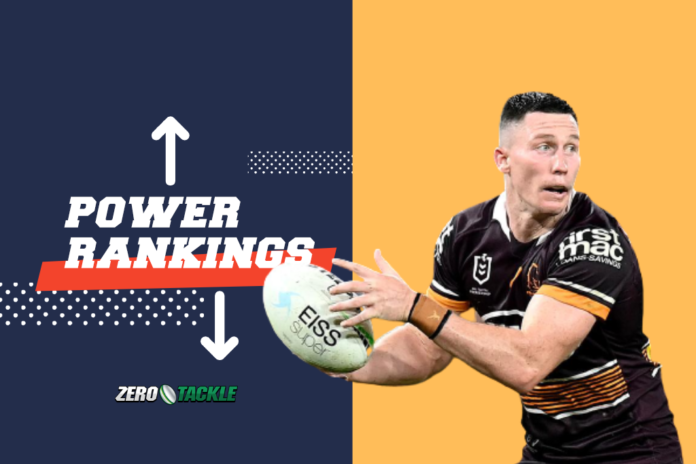 Another week, another Panthers win. The title favourites vanquished a very threatening Manly side in Bathurst in front of a loud capacity crowd.

Again it was the Nathan Cleary show. Liam Martin has his most destructive game of the season. If Brian To’o declares for NSW, he simply must be selected.

JFH and Yeo delivered a dominant display in the middle. They may run up 100 against the hapless Sharks this coming Friday evening. Hard to see who beats this side.

The Bunnies are two from two since Latrell Mitchell’s suspension showing the true strength of their squad. Benji Marshall is a legit genius. He has slotted into the halves with great skill and a level head.

Cody Walker has been incredible in the number one, however an injury to Adam Reynolds may see him back in the six this weekend. A horror injury toll somewhat took the gloss off a dominant win in the capital against Canberra. Keaon Koloamatangi was unstoppable!

To be fair this result came against the lowly Bulldogs, however can we all admit now that the Eels are pretty darn good? King Gutherson is surely in the Dally M discussion. He is at the middle of everything positive in blue and gold.

Mitch Moses is in career best form. It was great to see Ryan Matterson return to the top grade. Shaun Lane responded to being relegated to the bench with a huge effort. Hopefully Nathan Brown’s injury isn’t too serious.

The Storm suffered a wake up call in the first 40 on Friday evening. They were pushed way too far by the Sharks and their only try came via a deflection from a Sharks attacking kick.

The second half however was 10/10 from the purple. Reimis Smith scored a hatty, tearing a make shift centre/wing combo apart. Harry Grant and Nicho Hynes were both flawless in the second term. Christian Welch is a boss! Jahrome Hughes is elite. I will debate anyone who says otherwise.

Sam Walker!!! HOW GOOD IS THIS KID!? Four try assists (I’d argue for a fifth too), two line break assists a line break and a try saw him emerge the easiest man of the match effort across the weekend.

Unfortunately Brett Morris seems to have had his career ended via a horror ACL injury. Lindsay Collins will also miss the rest of the season. Josh Morris was incredible, crossing the line three times. The Roosters scored a try with 11 men, proving their dominance over Newcastle.

The Cowboys should have dropped here following their loss to the Warriors, however their effort, and results around them keep them higher than they deserve to be.

Scott Drinkwater is playing incredible footy right now. I cannot believe he’s facing being shifted to allow for two severely out of form playmakers coming in.

Jason Taumalolo looks tired despite just coming back from an extended break. Reece Robson is so good. Val Holmes is finding top form.

Manly hold their spot in the Power Rankings top eight due to recent results and results around them, however they pushed the red hot Panthers all the way. Truthfully you never felt they were going to win this contest but they showed enough to suggest they’re in the finals mix.

The literal second Tom Trbojevic caught that intercept you knew he was going to score. Unfortunately his brother Jake has been well below par recently. Jason Saab showed ridiculous speed in scoring.

The Warriors are back in the winners circle and probably should rate higher here following their 24-20 win over the Cowboys.

A try right on half-time proved crucial as the Warriors were able to just hold off a fast finishing Cowboys side. RTS was again incredible. Youngsters Curran and Walsh look like ten year prospects.

Not scoring in the second half isn’t great but leading 24-4 at halftime illustrates their dominance over parts of this contest.

This was a game the Dragons would have penciled in as a win. Unfortunately for the Red V this wasn’t played on paper. An early Cody Ramsay try aside, there wasn’t a whole lot to like here for the home side.

Jack Bird was strong and Paul Vaughan looked possessed at times, however too many dropped balls led to an awful 67% completion rate. Tough to win when you keep handing the ball over. Conceding seven line breaks doesn’t help either.

The Knights, with 13 men, conceded a try to an 11-man Roosters side. Ponga was standing in the line, with a 13 on 11 advantage. That actually happened!

They were absolutely blown off the park by a far superior Roosters side, despite a big home crowd behind them. Newcastle are going to beat the lesser sides but they’re a far cry for the contenders. This was awful.

The Raiders are officially in a slump. Losing their halfback in the warm up was always going to be tough to overcome to be fair. Ricky Stuart’s blame deflection suggests he is struggling for answers.

Papalii was rested, Croker was flat out dropped. Caleb Aekins has been a bright light across the past fortnight. Jack Wighton tried everything within his power to get his side back into the game late on but his teammates literally kept getting in his way.

Wow! 15 minutes in we were reaching for the record books to chase up record losses. At 22-0 down, the Broncos looked shot. Fans were leaving. Jamayne Isaako looked set for a stint in reserve grade.

Then Isaako flicked a switch and become prime Lockyer. TPJ absolutely dominated David Fifita which went a long way to winning this game. Payne Haas is unstoppable in the middle. Brilliant win.

Yikes. For the second week in a row the Titans ran out to a match-winning lead only the fade away and drop competition points. At 22-0 up after 15 minutes, it was a case of Titans by how many.

Fast forward 25 minutes and it’s 22-all at half time and the momentum was gone. David Fifita was painfully quiet until late on. AJ Brimson was again incredible while Tyrone Peachey continues his incredible form. What a horror result considering.

Tigers! Zac Cini! Tell me you didn’t get caught up in the fun when Cini crossed for a try in front of an entire bay of his supporters? Incredible scenes.

Joseph Leilua had his best game in Tigers colours. Adam Doueihi is a star in the making if he isn’t already. Daine Laurie is locked in a two-way battle with Sam Walker for rookie of the year honours. He had another monster game. Alex Twal is hugely underrated.

Unfortunately the Bulldogs showed very little of the fight and intensity they showed against the Sharks just a week ago. Their forwards easily lost the battle while Flanagan was relegated to clearing kicks for the first 40 minutes.

Their second half was much improved however after trailing 16-0 at the break, this was operation impossible.

For 40 minutes the Sharks, easily outplayed the Storm. A series of almost comically blown tries robbed them of a 10+ point lead at the break.

The second half was pure, reserve grade garbage and should see a host of Sharks starters dropped as a result. Chad Townsend is a walking gaffe, while Aaron Woods would be flat out making the Jets run on side.

Very few highlights in the second half. Mass changes are required.

Sharks
ROUND 9 STATS
56
Tackles Made
16
All Run Metres