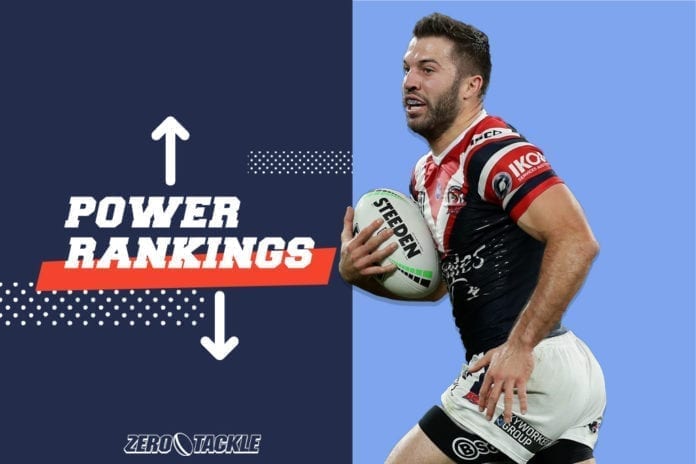 The back to back Premiers are on an absolute tear right now and are back to being the benchmark of the competition. A fourth-straight win since the restart of the competition came in the game of the season to date. They lost James Tedesco yet still ran over the ladder leading Eels on the back of Luke Keary magic. This side is so good it's scary. The Morris brothers have discovered the fountain of youth and are just as good now as they have ever been. Incredible effort by the tri-colours!

The Eels dropped their first game of the season in a game that lived up to every bit of the hype it attracted. The Eels looked set for a sixth straight win when they took the lead via a Maika Sivo try and Mitch Moses sideline conversion. Reed Mahoney stepped up in a big way in this game and looks a genuine star. Clint Gutherson tried his backside off while Michael Jennings was electric. Nathan Brown looks like he'll be suspended again which is a shame as he was massive here again.

Newcastle continued their red hot start to the season and returned to winning ways on the back of a big victory over the Broncos. Ponga celebrated his contract re-signing with a monster game. Kurt Mann has really stood up so far in 2020. Daniel Saifiti is among the competition's elite prop forwards right now. Pearce controlled this game extremely well. 200 more post contact metres shows that they won the middle against a very capable Broncos pack of forwards.

The Storm will be a little disappointed with their overall efforts on Friday night in their loss to the Panthers. They were, at times, ruthless in defence, but equally at times looked a step off the incredible pace set by Penrith. The fact Kikau was able to catch a bomb almost unchallenged is very un-Storm-like. The stats across this game were extremely close. For the first time in a long time the Storm just lacked that little bit of class. They'll be back.

The Panthers sent a real message on Friday night in beating the Storm. Josh Mansour continued his incredible season and has put his name back in NSW Origin contention. Liam Martin looked good despite his late sin-binning. Nathan Cleary really put it to the Storm all night. Dylan Edwards made a solid return and celebrated with a try assist. Brian To'o made an incredible eight tackle breaks. Kikau's try was brilliant. This was a fantastic game and huge win for the Panthers.

Canberra take a big drop here on the back of dropping a game they really should have won. Elliott Whitehead's 49th minute try looked to have set the Green Machine back on their way to victory but it was not to be. 76% completion on 42% possession won't win you many games. Curtis Scott has failed to fire since his high profile signing. Charnze Nicoll-Klokstad continues to run for miles every week. Not a major loss by any means but they'd be upset not to have the points here considering.

What a win! Talk about brave! The Sea Eagles beat the 2019 runners up in incredible circumstances. They lost Dylan Walker and Brad Parker early to injury and lost Tommy Turbo in the second half. Curtis Sironen made one of the tackles of the season to deny Jordan Rapana a try that would have completely changed this game. AFB continues to lead the way in terms of metres for his side. Turbo will be a massive loss given he was again his team's most potent attacking threat.

Despite the quality of opposition, the Bunnies look far more like the side we expected them to be after the following fortnight. Cody Walker makes an enormous difference and has been his side's biggest threat. They completed under 70% yet still ran in seven tries. All the Bunnies stars were heavily involved. Burgess was a monster, Cook too hot to handle, and that pass by Latrell Mitchell will be in many highlight reels for months to come.

Talk about a game of two halves. The Tigers were 10/10 in the first half and barely a 3/10 in the second. Zane Musgrove started the first half rout in just the first minute. Five more tries followed in the first 40 equalling the club's biggest ever half time lead. Alex Twal's injury is awful timing considering his brilliant start. Harry Grant is in the running for the buy of the season. David Nofoaluma didn't cross the line but was almost unstoppable with 212 metres and eight tackle breaks.

The Dragons recorded a second straight win on the back of brilliant games from their big names. Matt Dufty has enjoyed a wonderful return to the top grade. Zac Lomax scored a ridiculous try and played very well. Paul Vaughan monstered the middle with almost 200 metres. Cameron McInnes looks to be right at home in his new role while Ben Hunt is playing with confidence. The Dragons should really find some momentum on the back of two straight wins.

At half time the Cowboys season was over, Paul Green was on his way out of the club and records were falling. The second half saw the Cowboys fight back with four straight tries and restored some credibility. Taumalolo overcame an early, disasterous, drop ball to record 259 metres. Unfortunately outside of Taumalolo the Cowboys didn't really aim up.

The Sharks needed a win, and that is exactly what they got last evening. The 20-18 win over the Dogs is hardly going to kick start any great Premiership threats, however competition points were needed here desperately. Shaun Johnson will make the highlights reel for good and bad. Aaron Woods was monsterous. Talakei, Hunt, Toby and Fifita all put in big impact from the bench. Chad Townsend opened his try assist account. Bryson Goodwin was solid as a rock while Katoa scored an incredible hatty.

The Warriors failed for the second time this season to follow up a win with the required effort. Their 40-12 loss ultimately cost their coach his job and leaves them directionless. Tohu Harris was their best here while RTS did everything he could. They just lacked the class to really test the Bunnies despite an early try to the Fus. We'll discuss the coaching decision later in the week but it's going to be a difficult run for whoever is brought in.

The Dogs were brave, and at times well on top, yet fell just short against the Sharks. A late intercept try to Chrichton ensured a thrilling finish. That Adam Elliot try assist will long be remembered, but not as much as that DWZ hit on Matt Moylan. The ground is still shaking! Will Hopoate is one of the most underrated players in the competition. On another night the Dogs may very well have collected the competition points here. Brave effort.

The Broncos continued their awful run since the competition re-start with a 27-6 loss to the Knights. Xavier Coates scored another try and continued his rise on the wing. Pangai Jr had a very disappointing return to the game post suspension. Payne Haas needs to be used better. He has huge stats but minimal impact. Anthony Milford and Darius Boyd would both be dropped next week if not for their reputations.

The Titans continue their run at rock bottom after a disappointing loss to the equally out of form Dragons. A late try to Tanah Boyd restored some credibility but they were hugely outplayed. Moeaki Fotuaika is by far the Titans best middle man and put in another huge stint. Bryce Cartwright and Kevin Proctor combined for less than 100 running metres. Jaimin Jolliffe had his best game in the top grade and looks a real find.

Moylan to remain in Shire after landing extension

Panthers not ruling out Burton reunion

NRL All Stars game scheduled to cross ditch next season