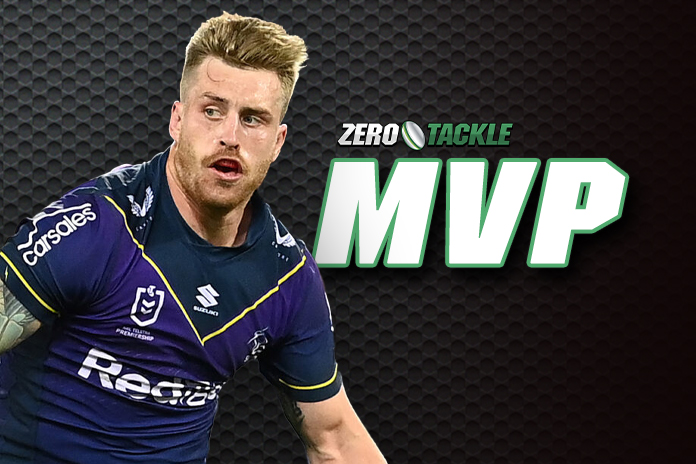 Cameron Munster may have moved to fullback for the Storm’s clash against the Titans on Friday, but it didn’t slow down his rapid rise up Zero Tackle’s MVP ladder after a dominant display.

After pulling a perfect 20 last week Munster has replicated the feat, bringing him within just one point of Round 20 leader Joe Tapine, who didn’t poll a single point in the Raiders loss to Penrith.

He’s also still behind James Tedesco, who has jumped clear of Tapine at the top after he polled 16 points for his efforts in the Roosters’ strong win over Brisbane.

Cowboys fullback Scott Drinkwater is rising rapidly up the ranking following an impressive 18-point effort in North Queensland’s win over the Canterbury Bulldogs. The two-try effort was a great result for Drinkwater, who had to share points among so many other impressive performers.

Meanwhile Ben Hunt’s early season form has taken a dip along with the Dragons’ chances of finals football. After surging up the MVP rankings Hunt’s form has stalled, with just one point from the Dragons’ loss to Cronulla to go with a duck egg from last week.

Here are all the Round 21 votes.

Both teams knew how important this game was going in, but only one team played like the stakes were that high as the Roosters cruised to victory against a strangely disoriented Broncos. While James Tedesco was his usual dominant self, it was Luke Keary leading the line for the Tri-colours with arguably his best performance of the year.

This match was only ever expected to go one way and it did – although it offered a little variety with Cameron Munster playing from the back. It didn’t slow down his recent run of form as his night ended with a hat-trick of tries, a massive 252 running metres and nine tackle breaks. Cooper Johns also shone in the five-eighth role.

Another game with plenty on the line, Parramatta played an impressively consistent game given their form in recent weeks. Clint Gutherson and Shaun Lane were in excellent form against their old club as the Eels reminded everyone that they’re still a threat and Manly’s hopes of a finals berth got noticeably slimmer.

The Rabbitohs continued their recent run of fine form, cruising to victory against an out-of-sorts Warriors side. Cameron Murray led the way through the middle while Latrell Mitchell continues to look unstoppable since his recovery from injury. Big man Tevita Tatola enjoyed one of his best games of the year so far.

The aftermath has detracted from a reminder that the Panthers are the team to beat, no matter who they put on the field. While Jaeman Salmon and Sean O’Sullivan did a great job replacing their renowned team-mates, it was the experienced Panthers like Isaah Yeo and Dylan Edwards who took it upon themselves to steer the team to victory.

The Sharks cemented their grip on third place against the hapless Dragons. Nicho Hynes kept himself in the MVP running with a perfect 20 points, and he was ably supported by Braydon ‘Tricky’ Trindall. Jack de Belin was a standout in a losing side, but the fortunes of these local rivals couldn’t be more different with four games to play.

The Cowboys sent the league another reminder of why they’re in second place, coming back from an early onslaught to claim a comfortable victory against the Bulldogs. Scott Drinkwater was immaculate at the back, but the Cowboys dominated all over the park thanks to Tom Dearden, Reuben Cotter and Reece Robson.

Only one of these sides had any momentum going in, but you wouldn’t have thought it was the Tigers after a terrible start that resulted in defeat. Dane Gagai and outgoing Super League recruit Tex Hoy were excellent for the home side, while Jacob Saifiti sent a reminder of the form that saw him make his Origin debut this year.