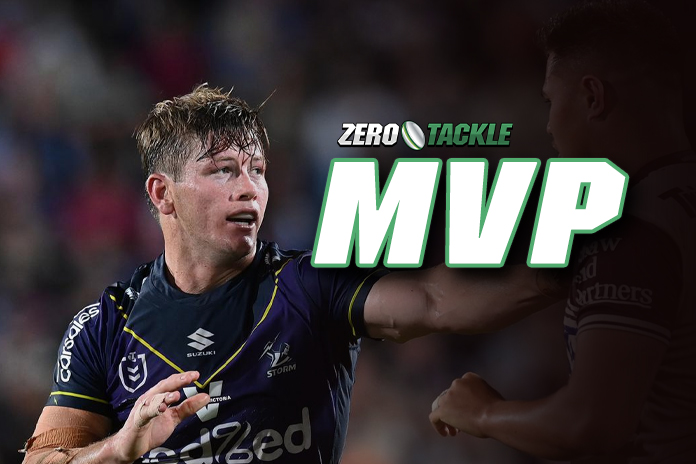 Another demolition job from the Melbourne Storm, led by Cameron Munster, has enabled the Storm megastar to take a 15-point lead in theZero Tackle NRL MVP race ahead of one of his own teammates, with Dylan Edwards the week's big loser.

Edwards, who had previously led the competition, fell to third this week on the back of polling zero votes.

For the first time this season, all eight games had a unanimous man of the match performance - according to our four-man panel - with Harry Grant's 20-point effort against the Storm taking him to second place.

Munster was voted in second place by all four judges, enabling him to hold the lead as he closes in on being the first player past 100 votes for the season.

Ryan Papenhuyzen and Jahrome Hughes also sit in the top five, while perfect games for Nicho Hynes, Daly Cherry-Evans and James Tedesco, who played his second in a row, have rocketed them into the top ten.

Here are all the Round 9 votes:

The Rabbitohs were heavy favourites to take the chocolates in the opening match of the round but ended up falling well short of the mark, with an Adam Reynolds-inspired Broncos outfit taking the victory by 32 points to 12.

In a dour game played on Friday evening in the Nation's capital, it was the Canberra Raiders who out muscled the Bulldogs. Josh Papalii was the key man for Canberra with a monster effort from the middle third, while Elliott Whitehead, Nick Cotric, Adam Elliott and Matt Frawley were among the best.

The streak is finally over - after 21 straight victories at home, the Penrith Panthers finally lost at the foot of the mountains against an inspired Parramatta Eels outfit. Clint Gutherson was the key man for the visitors, while Isaiah Papali'i, Ryan Matterson and Junior Paulo also had superb games.

It was the Trbojevic show on Saturday afternoon at a picturesque looking 4 Pines Park. Daly Cherry-Evans might have been voted the unanimous best on ground, but Ben Trbojevic's double on his starting 13 debut made headlines while the return of brother Tom was also a sight for sore eyes on the Northern Beaches.

It's hard to argue the Roosters have been in good form leading up to Round 9, but their effort to put away the Titans was much-needed as the club ran away to put 40 points on the board. A second straight 20-point game from James Tedesco has him racing up the rankings, while Luke Keary was also excellent.

The doubters have been silenced in a big way for the Cowboys, with Chad Townsend their best in yet another victory over the Knights. The Cowboys were rarely challenged by the Knights as they cemented their place in the top four, with Reuben Cotter putting in another 80-minute display.

Harry Grant and Cameron Munster stole the show as the Storm made it 162 points in three weeks. In what was a game to forget for the Dragons - their first loss in a month - Melbourne put on yet another clinic, with their forward pack also dominating.

Not even playing a majority of Sunday's clash with 12 players - and for a brief period, 11 - could stop Cronulla from putting nearly 30 points on the Warriors in an exceptional return to form for Nicho Hynes after a couple of quieter weeks.