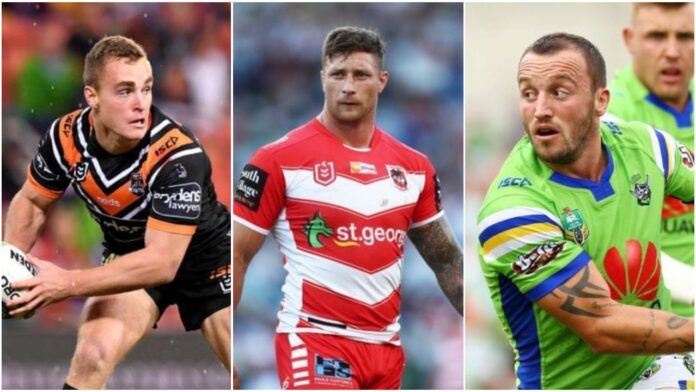 Despite being weeks into the pre-season, the signing frenzy is only getting stronger with November 1 now over a month in the rear-view mirror. Here is all the latest in NRL transfer news and rumours.

The Parramatta Eels have confirmed the double signature of Bailey Simonsson and Josh Hodgson as the club completes a raid of the Canberra Raiders.

The signature of Simonsson is immediate and will see him sign on a three-year deal, seeing him move to CommBank Stadium until at least the end of the 2024 season.

It had been heavily reported that Simonsson was keen for a move to Sydney to be closer to family, and it's a move which was set to suit three separate clubs.

The Dolphins have locked in their second signing for 2023, adding Parramatta Eels' forward Ray Stone.

A hard-hitting lock, Stone impressed during the second half of the 2021 season with more opportunities in Brad Arthur's side.

Stone was shifted into dummy half during the finals as Parramatta grappled with an injury crisis, losing both Reed Mahoney and his back up Joey Lussick.

Kevin Naiqama locks in club for 2022

Kevin Naiqama will be back in the NRL for 2022, officially linking up with the Sydney Roosters on a new deal.

Naiqama has spent the last three years with St Helens, winning three back to back premierships in the English Super League following his departure from the NRL at the end of the 2018 season.

It had been reported the Wests Tigers were also interested in their former winger's services, however, Trent Robinson and the tri-colours have won the race on a one-year deal for 2022.

The Wests Tigers are understood to have offered either Jake Simpkin or Jacob Liddle to the Panthers in hope of securing hooker Apisai Koroisau 12 months prior to his pending arrival at Concord.

The venture club confirmed the signing of Koroisau for the 2023 season last week, with the New South Wales playmaker set to link up with departing Eels forward Isaiah Papali'i at Concord at the end of next year.

According to The Daily Telegraph's Dean Ritchie, both Simpkin and Liddle have been placed on the trading table for the Panthers to mull over as part of a player-swap deal that would see Korosiau make a move to the Tigers a year early.

Parramatta is said to be keen on luring Tariq Sims from Kogarah at the cessation of his 2022 campaign.

While Sims remains a contracted commodity at the Dragons for the 2022 season, Dean Ritchie of The Daily Telegraph is of the belief that the Eels have narrowed their sights on the 31-year-old as a ready-made replacement for the impending losses of Marata Niukore, Isaiah Papali'i and Ray Stone.

Although each of the aforementioned trio will continue to call CommBank Stadium home next season, their collective losses for the 2023 season are set to leave a large void in Brad Arthur's forward pack.

FULL STORY: Dragons forward in the sights of Parramatta

A former one-time Tongan representative is set to have a final chance at cracking the NRL.

Delouise Hoeter, who made his debut for the Wests Tigers in 2015 and played seven games, has since been forced to make his way in the Queensland Cup, well away from the limelight of the NRL.

The Daily Telegraph are reporting he has been signed by the Brisbane Broncos on a train and trial deal ahead of the 2022 season.

A pair of immediate moves are set to be completed in a matter of days.

Nick Cotric's future at the Canterbury Bulldogs has been under a cloud for some time, and it would appear the outside back could be on his way back to Canberra.

It has been reported that his agent, Sam Ayoub, has already met with the Raiders about a potential homecoming, and the club are more than keen on the idea.

Fight for Bird ramping up as Dragons’ contract development emerges

Jack Bird is off-contract at the end of the 2022 season, and while most attention has been on the Parramatta Eels and Penrith Panthers, the latest news on the five-time Origin representative will have Dragons' fans nervous.

It has previously been reported the Dragons have been in discussions to extend the contract of the centre and second-rower since the middle of the year.

It's understood the Dragons and Bird's management had more discussions about a contract extension this week, but still are yet to strike a deal, with rivals circling.

Eels edging closer to another re-signing but doubt remains

The Parramatta Eels are reportedly edging closer to the re-signing of Junior Paulo.

Junior Paulo is the highest-profile player who remains off-contract at the end of the 2022 season, with the prop a representative player for the New South Wales Blues, and his engine producing enormous output over big minutes for the Eels at the back-end of the 2021 season.

Paulo has previously indicated he is set to test the open market, and while the Dolphins are believed to be chasing his signature hard, The Daily Telegraph's David Riccio told SEN Radio that the dialogue is positive.

READ MORE: Paulo tipped to remain in blue and gold

The Canterbury Bulldogs are yet to confirm either signature has happened officially, but Phil Gould has used his Twitter account to confirm the signatures of Reed Mahoney and Viliame Kikau for 2023.

The club have refused to confirm either signature, but that hasn't stopped Phil Gould from doing so in an address to members where he also confirmed that both players have signed four-year deals with the club.

The Canterbury Bulldogs have officially parted ways with forward John Asiata, who has never played for the club.

Asiata, who made his debut for the North Queensland Cowboys, before playing for the Brisbane Broncos during 2020, was just one of a number of signings at the Bulldogs ahead of 2022.

However, his stance on vaccination against COVID, and the Bulldogs' own stance as the most ready to enforce players and staff being vaccinated, has created something of an untenable situation for the forward.