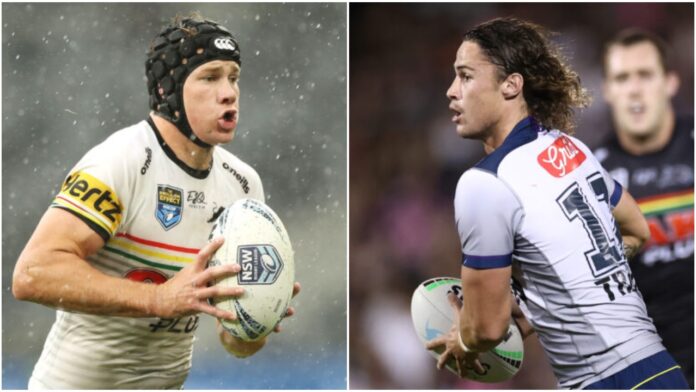 There are a host of names switching clubs over this off-season and starting their pre-seasons for 2022.

The likes of Adam Reynolds, Tevita Pangai Jr, Shaun Johnson and Dane Gagai will all line up for different clubs in Round 1.

The two players who immediately stand out as genuine marquee recruits though, at least in my opinion, are Matt Burton and Nicho Hynes.

Neither are necessarily the biggest names changing teams, however both have been given the keys to their new clubs as the new main men.

Burton is expected to transform the Bulldogs from wooden spooners into top eight regulars. Nicho Hynes is tasked with taking the Sharks back into premiership contention.

These two have a list of similarities. Both are young (Burton 21, Hynes 25), both had brilliant 2021 campaigns, both largely played out of position in 2021 and both are graduating from supporting roles into the first-string spot for their respective sides.

Before breaking it all down, I expect both to have brilliant seasons. I also expect both to start slow, given they spent the majority of a successful 2021 season out of the roles they will play in 2022.

It's also worth noting that I am a born and raised, rusted on Sharks fan. That needs to be made clear considering one of the two players in question will represent my club moving forward.

Also, I want to make it clear that the below is taking into account 2022 only. This doesn't necessarily mean I believe either is the better player, nor will that play have the better career, it's purely who will enjoy greater success in 2022.

I don't think I'm stating anything too world breaking when I say Matt Burton is the Dogs' ace signing. He is a perfect fit for what they need.

Canterbury have recruited exceptionally well. I rank them as having the strongest recruitment drive of all clubs, just edging out Cronulla and Brisbane, and I maintain that.

Their forwards have improved greatly but in terms of need, Burton fits the bill to a tee.

The Bulldogs lacked creativity in 2021. They couldn't decide on a full-time number seven, with star recruit Kyle Flanagan being dropped and recalled on four occasions.

I'm still not 100% certain on who will partner Burton, but his signing has locked in one half of the six/seven combo for as long as he wants it.

Burton's form is incredible. In my opinion, he was top-two among the NRL centres all season long.

His form dipped when he was moved into the halves, however this only occurred during the Origin-affected rounds, so it would be very harsh to place all the blame on Burton.

The only concern I have is the weight of expectation placed on the youngster's shoulders.

Dogs fans have waited over 12 months for this signing and reactions to his first photo in Dogs gear was tremendous. That said, comments hailed him as the saviour of the club.

I believe Burton is an Origin-quality player, but he steps into a role he hasn't filled for almost two full seasons, with no standout halves partner or number nine, and with the expectation to guide his side back to the eight right off the bat.

That is a tough ask, despite his incredible talents.

I'm more than happy to put it in writing that Burton will be in the top three or four players for the Bulldogs next season.

He may start slowly but we're going to see the serious class that saw the Bulldogs chase him so hard.

Shaun Johnson spent the early part of the season travelling the talk show circuit to cry foul over his friend John Morris being removed from the coaching position.

Matt Moylan, at times, was the Sharks' best, but injuries again defined his season.

Chad Townsend was dropped, allowed to leave and then shipped to the Warriors early, coming off a "match-winning" performance against the Sharks' bitter rivals, the Dragons. That shows where his game was at.

The one shining light in the halves came in the form of young Braydon Trindall, who I believe will be the number seven from about round three or four, with Hynes at six.

Hynes was signed to play halfback, and was a No.7 all throughout his junior footy. This seems to have been missed by fans who claim he's only a fullback.

The now-former Storm star needs time and the patience of fans to re-find his feet in the halves. His kicking game was almost non-existent in Melbourne given the talent on display there.

I wouldn't be shocked to see Hynes named at halfback, with Moylan at five-eighth in the early stages. This will allow Moylan to control the game and will give Hynes time to feel more comfortable.

A Trindall/Hynes combination looks the way forward in the Shire. Hynes' running game is electric, while Trindall can kick teams into submission.

Hynes is also a try assist machine, something the Sharks lacked last year. Johnson had to carry his side to finals in 2020 after receiving little help from Townsend.

The Sharks have also recruited exceptionally well, with a forward pack easily twice the quality of that seen in 2021.

Hynes will be provided with a platform by the likes of Finucane, Rudolf and co. and should see plenty of early ball from the recently re-signed Blayke Brailey.

I think it's fair to suggest Hynes will finish toward the top of the Sharks' Player of the Year voting.

Situationally, I don't think even the biggest Dogs fan can say they have a roster to match the Sharks.

Hynes' supporting cast, especially through the spine, is far superior to that of Burton's.

I expect Hynes to enjoy a season much like his 2021, whereas Burton's season will be a very, very different one.

I would be shocked if either player produces anything less than magic for their new club in 2022, however Hynes walks into a much better situation and should hit the ground running.

Craig Fitzgibbon looks to have completely transformed the feeling at the club in just a few short weeks.

Hynes also reported for training two weeks earlier than asked, or expected. He is just as keen as the fanbase who took to his photoshoot as I've never seen before.

Hynes and the Sharks will taste first blood in this theoretical battle against Burton due to the situation and quality on and off the field at their respective clubs.

Look for Burton to be in the Dally M running by year three of his Dogs deal though, with the playmaker set to stardom.