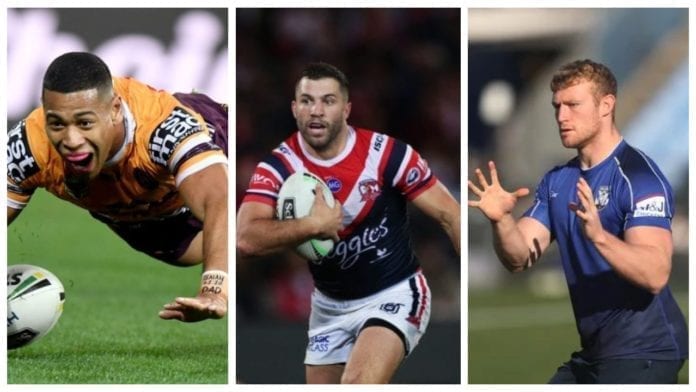 Team News: Ryley Jacks replaces the injured Cameron Munster. Jake Friend returns to the starting side and Nat Butcher starts at lock for the injured Sam Verrills and Victor Radley. James Tedesco and Josh Morris return, which shifts Joseph Manu back to the centres, Brett Morris to the wing, Mitchell Aubusson to the bench and Ryan Hall out of the side. Poasa Faamausili returns from his loan at the Warriors on the bench.

Prediction: You can't underestimate the loss of Victor Radley. He plays a similar role to de Belin at the Dragons, the way his ball-playing bridges the gaps between the halves and the forwards, and look at how losing de Belin affected St George Illawarra. They'll be a big emphasis on Jake Friend to stay fit too, without Verrills or Radley.

Nat Butcher is a star on the rise and will relish in the role, while Cameron Munster is a massive loss for the Storm. I think Cooper Johns may debut during his absence, but more likely in a fortnight against the Titans. Tedesco will be running hot after another week off, and the Chooks have way too much class for a Munster-less Melbourne outfit. Roosters by 10.

Team News: Curtis Scott has been dropped to the bench, with Michael Oldfield starting in the centres, with Bailey Simonsson replaces Jordan Rapana on the left wing. Joe Tapine returns at lock in place of the injured Corey Horsbrugh. The Dragons are unchanged.

Prediction: Ricky Stuart has finally swung the axe and dropped Curtis Scott to the bench, with Fox Sports reporting Scott was responsible for 50% of Canberra's conceded tries since the restart. The Dragons only lost by 16 points to the Roosters, but with the tricolours losing two to ACL tears, the Red V should've done more. They were level at halftime but just couldn't go on with it. A return to GIO on the back of a losing streak will put a fire in the Raiders, who should win healthily. Raiders by 22.

Prediction: The battle of the forward packs is the highlight of this one. Jason Taumalolo, Coen Hess and Josh McGuire take on a reinvigorated Reagan Campbell-Gillard, Ryan Matterson and Junior Paulo. The contest between Kyle Feldt and Mika Sivo will be one to watch. Mitchell Moses is a massive loss however Jai Field is electric and I think we could see a big step up from Dylan Brown. Clint Gutherson led from the front and while the Cowboys were dramatically improved against Newcastle, the Eels are a contender, and should grab this. Eels by 8.

Team News: Tyrone Peachey starts at centre in place of Dale Copley, with Bryce Cartwright on the bench. Cronulla are unchanged, with Andrew Fifita again named to start.

Prediction: Flip a coin. Cronulla looked in sync against a depleted Manly side, while the Titans racked up a 30-12 win against big brother Brisbane, and finally showed some oomph. The Titans will play their heart out and score some points, but Shaun Johnson is controlling games as best as we have seen, and will have too much polish for a Titans side more likely to break. Cronulla by 16.

Team News: Peta Hiku will play fullback in jersey No. 3 with RTS suspended, and Gerard Beale earning a reprieve in the centres. Faamausili has returned to the Roosters and is replaced by new loan player, Panther Jack Hetherington on the bench. Jamayne Isaako replaces the dropped Corey Oates, with Thomas Flegler returning in place of Jamil Hopoate on the bench. Joe Ofahengaue is suspended, replaced by Patrick Carrigan.

Prediction: When will Brisbane break through? Five games on the trot is a low we haven't seen from this club in some time, and if they can't beat a Warriors side without RTS, then the pressure on Anthony Seibold really mounds.

The Warriors could still very well win this, with a back three of Hiku, Maumalo and Fusitu'a offering plenty of metres from the back. New Zealand have conceded 90 points in two weeks and with Brisbane as desperate as they'd be, they should win this in a high-scoring affair. Tipping Payne Haas to cross the stripe too. Broncos by 18.

Team News: Wests are unchanged, while Josh Mansour returns in place of Brent Naden for Penrith.

Prediction: This should be a cracker. Wests finally put the 80 minutes together against Canterbury, looking sharp with Reynolds in the halves and Harry Grant lurking around the ruck.

Penrith keep on trucking, with Nathan Cleary in particular looking in great touch against Souths. His game management has improved immensely since James Maloney's departure, with pundits tipping him for the Dally M. This is looking like a '22-20' type game, but Penrith are just firing on a different level to the Tigers right now, and should edge them out. Penrith by 2.

Prediction: Moses Suli will be having nightmares all next week, facing a returning Bradman Best on Sunday. A return to Lottoland will be favourable for Manly, but they fell to bits without Dylan Walker and Tom Trbojevic last week, conceding 40 to Cronulla. Daly Cherry-Evans will have to up his production if Manly are to snatch the victory, but with Pearce and Ponga playing behind Dave Klemmer and the Saifiti brothers, they'll have too many points in them. Newcastle by 14.

Team News: Will Hopoate, Kerrod Holland and Jake Averillo are all out of the starting side, with DWZ starting at fullback, with Reimis Smith and Marcelo Montoya the centres, Holland on the bench and Nick Meaney and Christian Crichton the wings. English international Luke Thompson is among the reserves. James Roberts starts with Braidon Burns dropping to the bench.

Prediction: This game could go one of two ways, neither favourable for Canterbury. Either the game descends into a grind and Souths win something like 22-8, or the Dogs fade and the Bunnies post a big score. They'll be eager to bounce back after another error-riddled performance against Penrith, and we could see a British Battle if Luke Thompson debuts against Tom Burgess. Expect Latrell and Cody Walker to click and target a weak Bulldogs' backline. Souths by 26.

Nat Butcher. For the remainder of the 2020 season, we'll see a tussle between Butcher and Isaac Liu for the 13 jersey. They offer different strengths, though after a few weeks of ball-playing focused training sessions, Butcher will be a breakout star this season. The nuggety lock is averaging 81 metres and 23 tackles in less than half an hour on the field, he has big boots to fill up but he won't skip a beat.

Anthony Seibold. Geez, where to start. One week he says Dearden hasn't played in 11 months so he isn't ready to come back to the NRL, the next week he's playing out of position at hooker off the bench. The head coach's biggest issue is his desire to win has begun to erase the culture at the club, they must look to former players to show this young squad what it means to wear the Brisbane jersey, because as it stands, managing a club as big as the Broncos is out of Seibold's depth.

Rumour of the Week

Three clubs will tussle for the signature of John Bateman. His former Super League club in the Wigan Warriors, the Canterbury Bankstown Bulldogs and the Gold Coast Titans.

The Warriors are the favourites, with Bateman missing his 10 year-old daughter who still resides in the UK.

Canterbury have a warchest and no one to spend it on, plus the arrival of fellow English international Luke Thompson may have some sway.

And thirdly, the Titans. We have seen with Bateman that money talks, and he has been vocal on his desire to earn as much as possible before returning to England. The Titans want David Fifita badly but with the Junior Kangaroo set to re-sign at Red Hill, look for them to throw big money at Bateman.