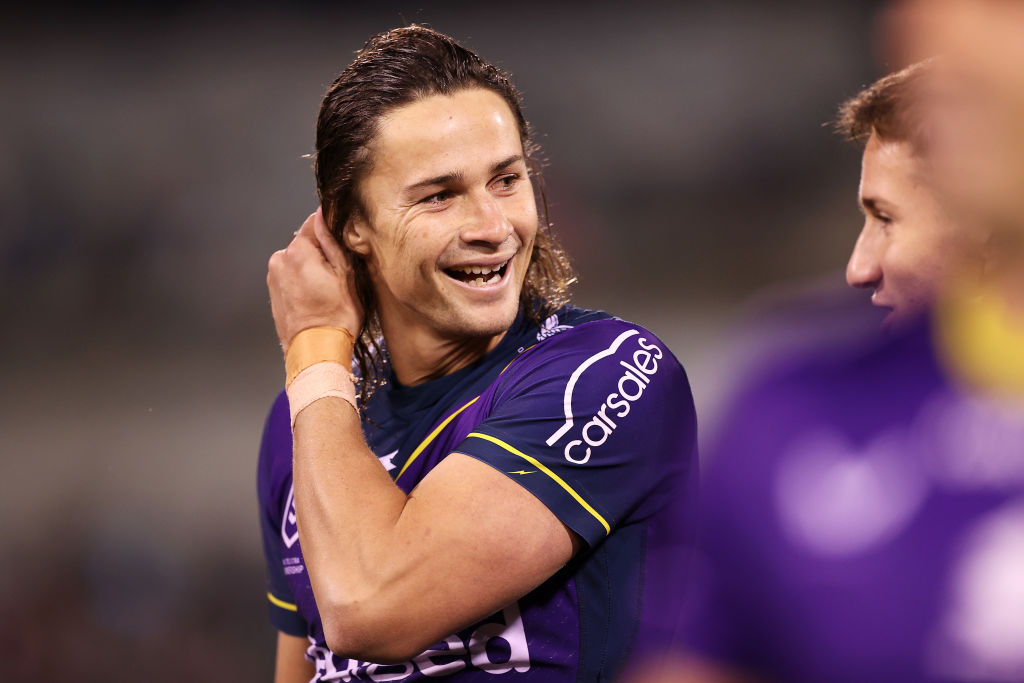 Then there were six. We said goodbye to two sides over the past weekend. A weekend chock full of talking points. Here are 20 thoughts from the first weekend of the finals.

1. Almost everyone, myself included, had the Melbourne Storm and Penrith Panthers contesting the grand final for a second straight season. That it is not going to happen still doesn't seem real. Finals football is a different beast.

2. Did Cody Walker finally shrug the tag of failing to deliver on the biggest stage? Unfortunately, his performance will be largely forgotten come preliminary finals time, but he was very good on Saturday night.

3. It was great to see Mitch Moses stand up and lead his side to victory over the Newcastle Knights. He stepped up and made the big play when it was needed. Very encouraging to see.

4. With the game in the balance and with plenty of time Mitchell Pearce put up a bomb that gave away a seven-tackle set. They conceded from that set. Shows you how little there is between teams in this finals series. Two metres shorter and that's a perfect kick.

5. I have to admit, on Friday night I was a little worried we might cop four blowout finals results this weekend. Instead, we had three magical games. Two could, very easily, have gone the other way. Incredible.

6. I was largely joking on Friday night but Tom Trbojevic's failure to light up the better sides has to be of some concern. He blew the Cowboys, Sharks and Tigers off the park but was barely sighted against the Storm.

7. Sticking with Turbo, his stats were awful this weekend. Many blamed Manly's forwards. In a similar (40-14) loss to the Storm, Sharks fullback Will Kennedy had a line break, two line-break assists and a try assist. You can't frame it as anything other than Tommy had an off night.

8. Good call by the NRL to move the preliminary final kick-off time for the Storm. I don't think it will have a huge effect on viewers given Storm fans would watch regardless, but there will be a fair few who have a look before the bounce for the AFL decider. Every eyeball counts.

9. Yes Patrick Herbert should have passed but can we appreciate the effort by Sam Walker to run down and tackle Phillip Sami? He was ten to one to make that tackle. His effort extended the play, which lead to the scramble and Herbert error. Unbelievable.

10. I really missed the full round of NRL action this past weekend. Especially the 3pm game. Thursday I barely noticed but the absence of that Saturday afternoon game was pain!

11. How about those poor Melbourne Storm losing Brandon Smith early and only having Harry Grant to come on and play in the hooking role? That Storm bench is a cheat code! Hynes came on and played as a ball playing middle forward and looked as though he'd played the role his entire career.

12. If you're the Sharks or Raiders you have to be extra filthy after this past weekend. The Roosters were there for the beating and now play a Manly side coming off a flogging. The route was there but they fell short when it mattered.

13. The above said, you have to believe Trbojevic will have a bounce-back game this Friday night. James Tedesco is in career-best form and has carried the Chooks for weeks. Teddy vs Turbo shapes as the most mouth-watering contest imaginable.

14. For the second season in a row the Knights kicked off their finals series by scoring inside the first minute. They scored 20 points in both finals also. Yet lost both games. Crazy how this game throws up such coincidences.

15. It was strange to see finals games being played in smaller venues but it was equally a treat and very enjoyable. The Saturday night doubleheader was equally a brilliant idea. Have to wrap the officials for what they've produced in tough times.

16. The bunker got that penalty try decision 100 per cent correct.

17. If I were a betting man, whatever is being offered on Cameron Munster man of the match in the grand final, get on it. He had a quiet run into the finals but lifts in the big games. Freakish talent.

18. Jayden Campbell was arguably the best fullback on the field in his first finals appearance. Considering he was opposing one James Tedesco, that is huge. Everything about young Campbell screams superstar. There will be more than a few youngsters with his name on their jersey next season.

19. If you'd offered both the Knights or the Titans a guaranteed Week 1 exit pre-season, both are probably taking it. Now, given their performance over the weekend, both sides feel a little disappointed with the results.

20. Another year, another prelim for the Bunnies. Their fourth straight. Can't help but feel like this is the year they go one further. The big difference is this is the first time across four seasons they won in Week 1 of the Finals.

“That is why he isn’t an Eel”: Former Parramatta recruiter opens...