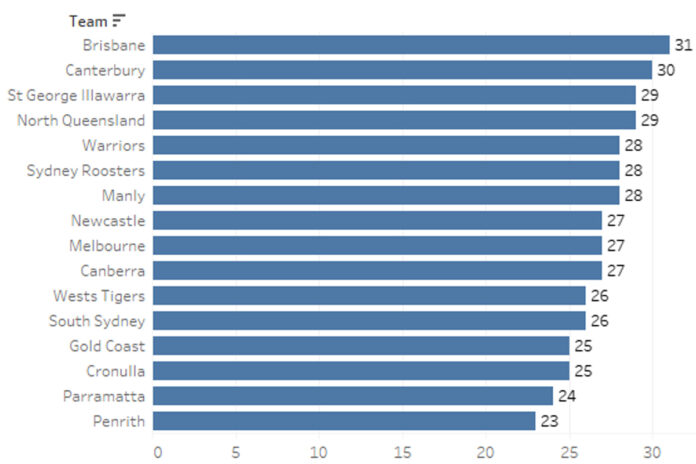 The first half of the 2021 NRL season is over already.

Time sure does fly, unless you’re a Raiders fan, and then it probably doesn’t move quick enough. With the passing of the midpoint, it’s time to look back at what has transpired and see what has changed thus far.

Fatigue has been the main talking point this season, with the NRL claiming there is no link between the rule changes and fatigue. I figured it was a good time to take a broader look at how fatigue and injuries has changed minutes played and players used in 2021.

Earlier this season the Eye Test already looked at how teams were using their interchange bench more often, and earlier in games. With fewer stoppages, greater fatigue impact and more line-up changes, it is no surprise that teams who excel in recruiting outside of their own back yard or prioritise developing their own juniors are excelling this season.

Let’s start by looking at a simple measure – the average minutes played by an NRL player. 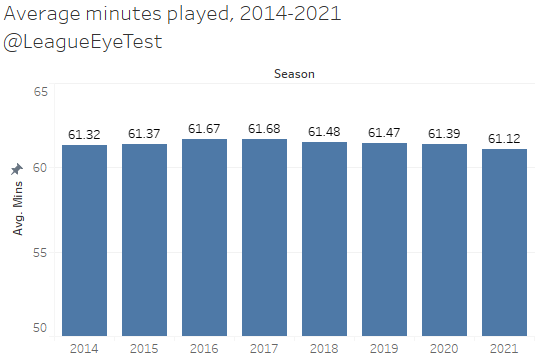 Over the past eight seasons players about 61 minutes per game, with 2021 sporting the lowest average at 61.12 minutes, beating the previous low in 2014 of 61.32. This makes sense with the number of injuries and head impact assessments, as players who would usually be playing big minutes are spending more time off field.

Notice the average minutes played hasn’t changed much from 2020 to 2021? It’s down but only by a small margin. Keep this in mind for later. 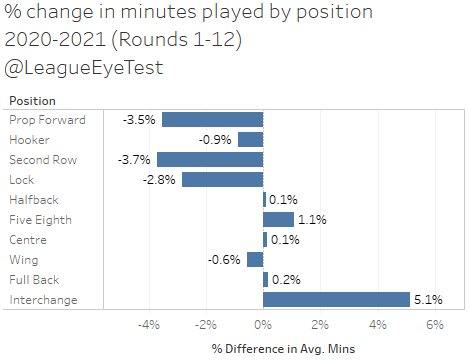 Most starting forwards are playing fewer minutes, with front rowers, second rowers and locks all playing around 3% less than last season. This has been made up by interchange players, who are spending 5% more time on field, which makes sense given the number of injuries and reduction in stoppages.

The decline in minutes makes sense, given that there has been a high number of players injured and undergoing a HIA most likely due to the reduction in stoppages from poorly thought out rule changes.

Not a good NRL round for concussion. Another season high for HIAs with 23 according to @nrlphysio. 7 formally failed, and Brien says, “possibly more with a few 50/50 calls from the final 15 minutes”. Season high for failures is 8.

Which raises the question, has that affected how many players each team has used this season? The number of unique players used each season is below. For comparison purposes, 18th men have been excluded. 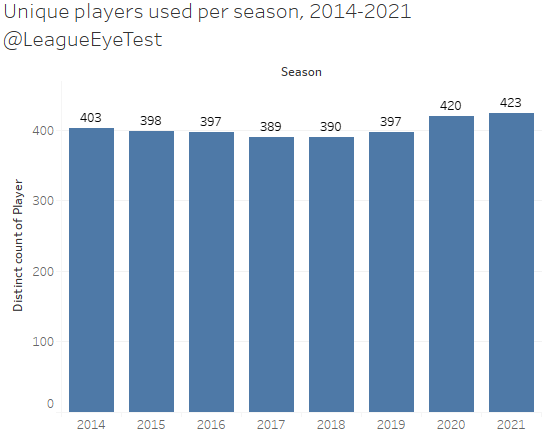 Here we can see some of the affect of the “fewer stoppages” era of the NRL. 2014 was the only time in the previous eight seasons where over 400 unique players had stepped onto a field in the first twelve rounds. The jump from 2019 (397) to 2020 (420) was about a 6% increase. For those who like to claim that there isn’t enough talent to support a 17th or 18th team, we’re using an extra team of players each season due to attrition under the current environment.

Next up I’ve split this out by team for 2021, to understand which teams have coped the best with the increased fatigue, and who has struggled. 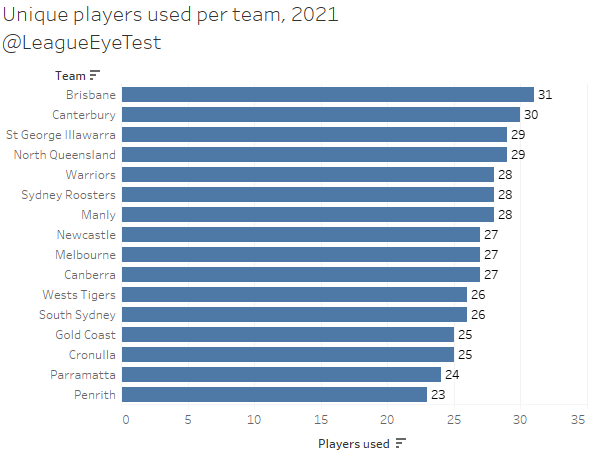 No surprises that Penrith and Parramatta have been the least affected by line up changes this season. Those at with the most changes have been brought about by injuries (Roosters, Warriors), suspensions (St George), reshuffles (North Queensland) or a combination of all three (Brisbane, Canterbury). 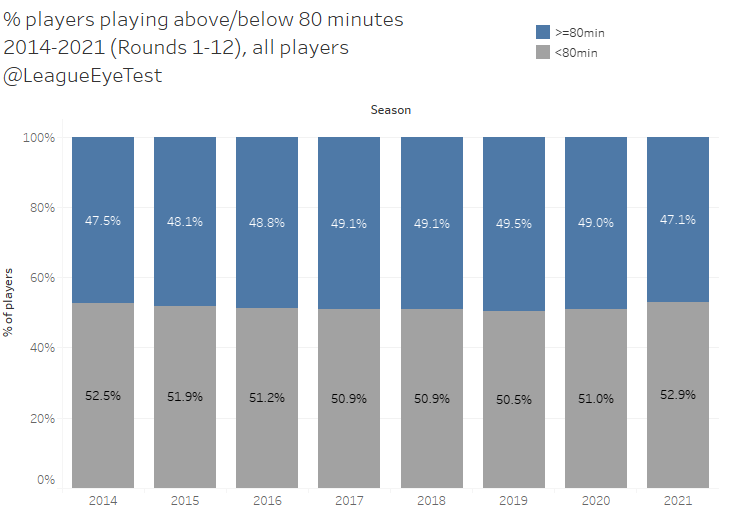 Unsurprisingly, again it’s the lowest percentage of players playing 80 minutes since 2014, and nearly a 2% drop from 2020 when set restarts were implemented in Round 3. Coaches are finding they cannot leave players on the field as long as they used to, whether that be due to injury or fatigue leading to bad decisions. Keep in mind that some players are being forced to play 80 minutes because there were no available interchange players due to injury.

Even more alarmingly, backs (numbers 1-7) are playing the lowest percentage of full games since 2014 as well, at just under 89% of players hitting 80 minutes. 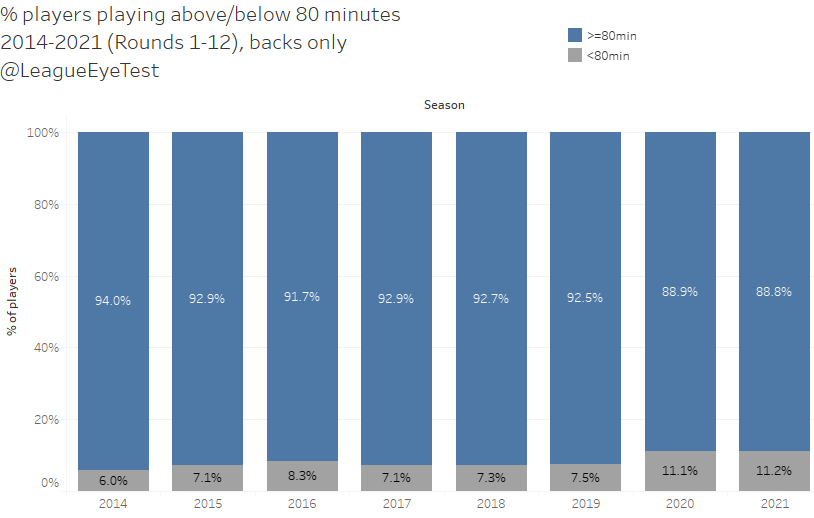 After only once hitting 8% prior to 2020, we’ve had two seasons of the percentage of backs not playing 80 minutes above 11%. Over one in ten backs are now not playing the full game. Regardless of the reason, whether it be concussion, injury or getting hooked, backs are playing fewer minutes than previous seasons.

The last thing I’m going to check is the distribution of minutes played to check for any trends. Below is a box and whisker plot, which can be used to show the spread and a five number summary of a set of data. The numbers are the minimum, first quartile (25%), median, third quartile (75%) and maximum. Here’s how the distribution of mintues over the last eight seasons looks. 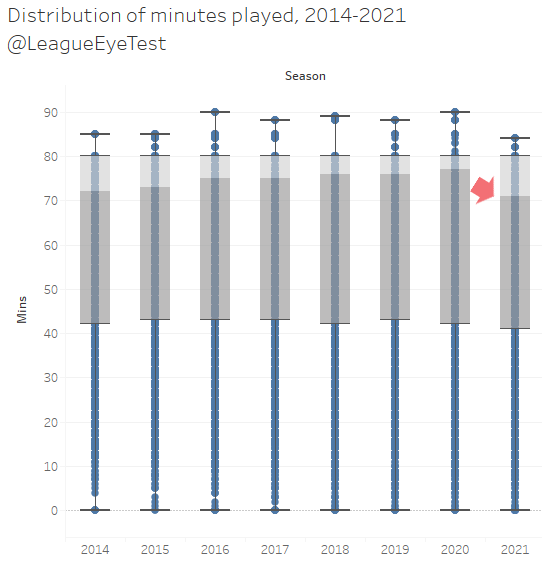 The third quartile hasn’t changed much, and at 41 minutes is in line with other seasons, confirming what we discovered earlier, that fewer players are playing the full 80 minutes and it’s dragging down the median. Those minutes are being distributed to interchange players who are spending more time on field and the average is masking the change. It’s also why you don’t use averages in your press releases to unsuccessfully quell player unrest.

It’s pretty hard to argue now that players aren’t being affected by fatigue this season, with fewer playing 80 minutes, interchange player are spending more time on the field and a larger percentage of backs aren’t playing the full game.

The NRL can use whatever unrelated metrics they like to show that things are working. but as a wise man once said, “the kind of people swayed by statistics are generally not swayed by bad statistics and have keen enough noses to smell dumb shit a mile off”.

Being concerned about player welfare and not being a fan of the current rules aren’t mutually exclusive. Unlike those with a predisposed agenda, the Eye Test is agnostic and only relies on facts.

This article was originally published at The Rugby League Eye Test.