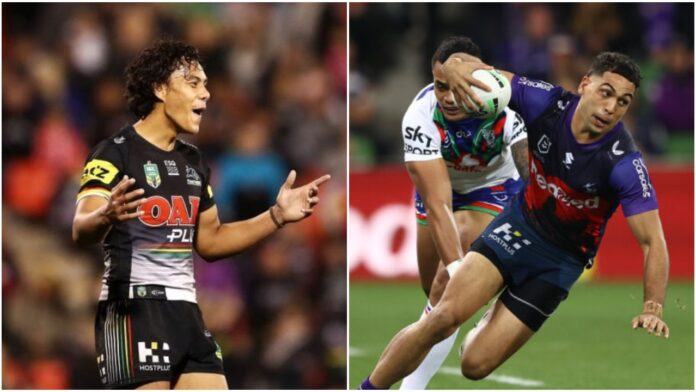 Melbourne Storm great Cooper Cronk has named Panthers playmaker Jarome Luai as the man that can exploit the reigning premiers' one fragility in Saturday's preliminary final.

The Storm enter the penultimate match of the season as favourites following a blistering win over Manly almost two weeks ago, while the Panthers narrowly avoided a straight-sets exit against Parramatta on the weekend.

The Grand Final replay is sure to see many battles within the war, with the halves certainly set to play as a key chapter in who claims a spot in the premiership decider next week.

Superstar halfback Nathan Cleary is understood to have overcome a number of niggles to be fit for the match, while Storm duo Jahrome Hughes and Cameron Munster will be hoping to continue their hot spell.

The dazzling degree of playmaking talent between the aforementioned trio will be on show once again, however Cronk believes Luai will be the answer to Penrith booking a Grand Final berth.

Speaking on The Matty Johns Podcast, the former Storm halfback believed the Penrith No.6 can exploit Melbourne's weaker right edge.

“The key to this game is Jarome Luai," Cronk said. "He can be that spark on the leftside attack.

“The Storm don’t have many weaknesses but their right edge is a little bit of a sore point with Reimis Smith and George Jennings.

"Luai just needs to sit there and watch the right edge of the Storm and once it’s compressed or disconnected: ‘Cleary, Isaah give me the ball’.

“If he touches the ball 20 times he needs to have 15 really hot touches for Penrith to win.”

Luai was without partner-in-crime Cleary during the Panthers' Round 20 defeat to the Storm in early August.

The Samoan five-eighth was limited to just the 10 runs and 52 metres for the match, as well as four missed tackles.

The Panthers are likely to see injured flyer Brian To'o feature at Suncorp Stadium this weekend, despite the metre-eater being named in the No.21 jumper for the match as he nurses an ankle injury.