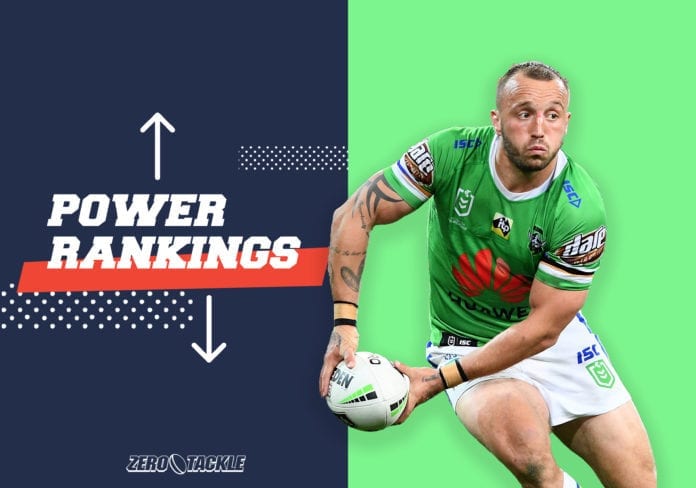 Canberra sent a loud and clear message to the competition on Saturday evening that 2019 was no fluke. Their 22-6 win in Melbourne over the Storm was as comprehensive as it sounds. Four tries to one including a 3rd minute try to the the returning Jordan Rapana saw Canberra put the Minor Premiers away. George Williams was absolutely incredible in the number seven with two try assists, a line break assist and a line break himself. Up front it was the Papalii show however the bench put in a huge effort. Great win by the Green Machine.

All the talk heading into this game was whether or not the Eels were genuine contenders. It's only round three however I feel it's pretty safe to say that the Eels are in the running. The 34-6 thumping of the Broncos was a brilliant return to Rugby League for those in blue and gold. Clint Gutherson was best on ground in a side full of top performers. The Eels dominated this game with almost 65% possession and a thousand metres more than their opponents. Good win.

Penrith remain undefeated although yesterday's draw will feel like a loss given the circumstances. Up 14-0 against a hugely depleted Knights side who lost both their halfback and number nine before halftime, Penrith missed a heap of opportunities to win this contest. They had this game won numerous times, although will likely be happy with a point following extra time, where Newcastle looked set to win. Apisai Koroisau is arguably the best performer across three rounds. Kikau is a machine and Brian To'o went over 300 metres. I could dedicate 10 paragraphs on this game.

Newcastle picked up a point in incredible circumstances and will feel like winners this morning. 14-0 down and sans their star Mitchell Pearce as well as Connor Watson inside ten minutes, this game looked over from very early on. That said, they had their chances to win this game late on and again in golden point extra time. David Klemmer lead from the front with over 250 metres and took difficult hit ups even in the 89th minute. Tex Hoy, Bradman Best and Chris Randall all had huge games despite being very early in their careers.

The Storm fell to their first loss of the season in continuing their poor recent run of results against the Raiders. Melbourne were heavily affected by the new rules in that they were unable to wrestle and slow down the play when momentum was against them like in recent years. Ryan Papenhuyzen continued his incredible run as an NRL first grader and did literally everything in his power to will his side home. The Storm won the major stat battles; metres gained, post contact metres, possession but couldn't get home.

The Cowboys continued their impressive start to the 2020 NRL season with a huge win over "local" rivals the Titans. The 36-6 victory looks good on both paper and in reality despite the quality of opposition. Valentine Holmes has enjoyed a brilliant return to the game. He's become a try assist machine. Reece Robson made a huge play for a starting hooker position with a huge effort including two tries. Jason Taumalolo is super human. Another 290 metres run in two huge stints. Ben Hampton scored two more tries continuing his impressive season.

The Broncos were brought back to reality in a big way following a second straight hammering at the hands of the Eels. Payne Haas was again an absolute monster with 196 metres including an insane 97 post contact metres. Otherwise though this Broncs side was heavily outplayed. They ran for 1000 metres less than their opponents. Staggs had an off night despite an incredible start to the season. Another injury to Alex Glenn further depletes their forward stocks. An off night for the Broncos.

The Tigers efforts deserved a rise here however due to results around them they stay in 8th position. The 28-16 win over the Sharks was a classic tale of two halves with a twist. They started the game on fire rushing out to a 10-0 win, only to then trail 16-10, only to then pile on 18 straight points to win the game. David Nofoaluma was best on ground in a monster effort. Harry Grant looked brilliant on debut in the nine. Benji Marshall is ageless and continues his resurgence.

The Sea Eagles did the job against the Dogs without really stepping out of first gear. The seven try to one win was a flogging in every sense of the word. The Trbojevic x 2 show ran hot last night while DCE and Addin Fonua-Blake had huge games. Tommy Turbo finished the game with two tries, three try assist, two line break assist and two tries. Ridiculous stats. There simply wasn't a bad player on the field wearing Maroon last night. Bigger challenges are to come however this was clinical and it was resounding.

The Roosters are back thanks to a 28-12 win over old rivals the Bunnies. Five tries to two including book end tries to Tupou and Friend put the tri-colours back on track. Kyle Flanagan had his best game at the Chooks to date, while the returning Boyd Cordner immediately changed the outlook of this team. James Tedesco had, by far, his best game of 2020 with over 300 running metres and tackle breaks galore. Josh Morris looked good on his club debut and added yet another weapon.

The Warriors are on the board after a near perfect performance against the Dragons on Saturday afternoon. 46 completions out of 48 sets with the football is downright ridiculous in this day and age but that's exactly what the Warriors put together. Roger Tuivasa-Sheck put in yet another 10/10 performance with 285 running metres and a lead-from-the-front performance way beyond stats. Eliesa Katoa is a star on the rise. Kodi Nikorima looked right at home in the halves. This was a brilliant performance by the Warriors.

The Bunnies continued their indifferent season to the season after being beaten comprehensively by their biggest rivals. The Latrell Mitchell questions will continue to be asked until he has a brilliant game, but he again here was very quiet. Burgess and Murray looked good in the middle for the Rabbits but otherwise they were heavily outplayed. Troy Dargan looked at home in the top grade on debut. Adam Reynolds was quiet. Damien Cook looks like he'll be super dangerous given the new rule interpretations.

The Sharks capped off a week of negativity with yet another below par effort. Trailing 10-0 after minutes they managed to fight back and lead 16-10 at the break, only to absolutely fall apart in the second 40. The "effort" by Chad Townsend and Josh Dugan to tackle Nofoaluma off the drop out summed up the team's over all performance. Matt Moylan returned and played well at lock however the Sharks other big names again simply failed to fire when called upon. John Morris's use of the bench will come under heavy scrutiny.

The Dogs are lucky there are two worse sides than them right now as honestly they deserve to be sitting in 16th. A Jake Averillo try in the 70th minute was the only thing worth celebrating on an otherwise awful night. They conceded seven tries although it could have been worse. Dylan Napa topped the running metres with 148 but, like his other forwards, failed to make any real impact. This looks like a long season ahead for the blue and whites.

This may be rock bottom in a pretty fire time for the Dragons. For all the good will the Warriors have right now, they aren't exactly Premiership favourites yet they put the Dragons to the sword. Cameron McInnes made 75 tackles on his return showing again his importance to the club. Pressure continues to mount on the Dragons coaching team and star players. They need a win, now. Questions will be asked re the Hunt/Norman partnership however the club's issues run way deeper than throwing shade at two players.

The Titans are in for a long 2020 season. That became even further apparent after their horror 36-6 loss to the Cowboys on Friday evening. Brian Kelly's 13th minute try was a rare highlight in an otherwise forgettable night. I'm a big fan of young Moeaki Fotuaika who again topped the metres run for the Gold Coast club. I don't want to pile on Ash Taylor but the young half simply isn't delivering. The club really need to decide on what to do with Tyrone Peachey. Same "effort" different week unfortunately.