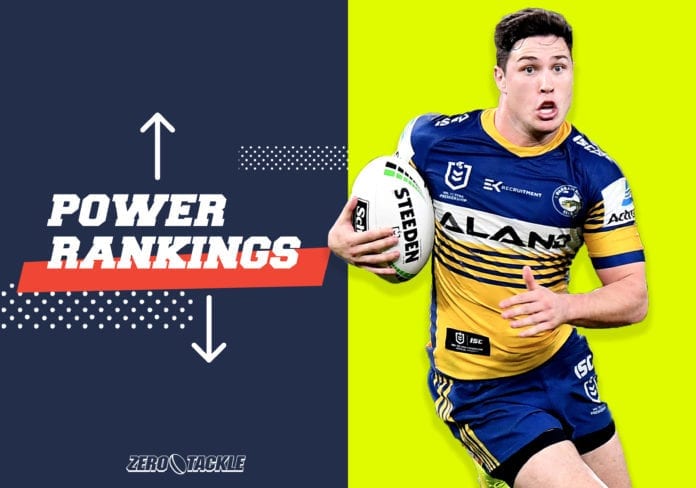 The Eels are flying high as the only team sitting 4-0 across the opening “month” of fixtures. We all know the way this game finished, with a refereeing error, but the Eels were comprehensively the better team across the opening 40 minutes. If this were a fight, the Eels win this on points. Blake Fergsuon looked far more like his usual self in a big effort after a quiet opening few weeks. Mitch Moses lead the way without doing anything overly flashly. Maika Sivo was back to his destructive best with a try, two try assists and a line break. The starting Eels front row combined for almost 400 metres. Good win despite the controversy.

The Knights put in arguably the team performance of the week in ending the Raiders undefeated streak. The 34-18 win came on the back of a monster game from Kalyn Ponga as well as huge efforts from Bradman Best and Edrick Lee. Ponga was in absolutely everything although his middle men really laid an excellent platform. Best looks like a shoe in for rookie of the year if he stays fit (Assuming he is eligible with the ridiculous set of rules). Andrew McCullough put in a brilliant first shift on his club debut. That Knights left side is lethal!

The Panthers continued their surprising undefeated run with a huge victory over the Warriors. The 26-0 win was every bit as comprehensive as it looks on paper. Ivan Cleary has a big decision to make re his halves make up moving forward with Nathan returning this weekend. I’d say that Matt Burton has emerged the clear choice to partner the NSW Blue in the six and seven moving forward. James Fisher-Harris and Isaah Yeo are in a battle for the game’s most underrated forward. There isn’t a Panthers fan out there who wouldn’t take 3-0-1 at this stage. Brilliant start.

The Raiders were brought back to reality on the back of a Ponga-led Knights masterclass. The Raiders were far from terrible and this won’t raise too many alarm bells, but they were very much outplayed. Charnze Nicoll-Klokstad tried his backside off in a huge effort. Josh Papalii is an absolute monster and scored a destructive solo try that looked to make a game out of a lost cause. George Williams laid on another two tries and continues his brilliant start to his NRL career. Ricky’s use of Jordan Rapana was baffling to say the very least.

The Storm put any fears that they would be upset by the new refereeing interpretations to rest after a resounding win over the Rabbitohs. The 22-8 win did come with the odd scare, however the Storm really never looked like they were in danger of losing this match. Papenhuyzen and Munster are super dangerous and will light up the competition all season. Dale Finucane is such a weapon. He never gets the attention of the likes of Kikau etc but he’s an absolute rock. Cam Smith played like a mid 20s number nine yet again. Didn’t take him long to adjust.

The Roosters have put together two straight wins since the resumption of play with an absolutely monster game in Brisbane. The tri-colours halves ran riot. Kyle Flanagan looked every bit the first grade star here while Luke Keary had spiders on him. Lindsay Collins had his best ever game, Angus Crighton was an absolute machine, while Victor Radley hit everything that moved. Brett Morris was 10/10 at fullback while Joseph Manu looked much better this week. Scary signs from the back to back Premiers.

The Cowboys were dealt a harsh lesson on Saturday evening after being beaten by the Sharks. Valentine Holmes had a quiet game against his former side. They really missed Jason Taumalolo (captain obvious alert) with only their middle three making over, or anywhere near, 100 metres. 17 errors is pretty dire reading, although the Cowboys have two weapons set to return very soon. Not a bad effort considering, however they really looked out of ideas chasing the game.

It’s not often that a team can climb the rankings on the back of a loss but results elsewhere combined with circumstances of their defeat combine to do just that. For the record that pass looked a pretty simple pass back, float forward pass, however Dylan Walker clearly dropped a ball over the line that was missed so it all evens out. The Sea Eagles were hugely outplayed in the opening 40 but fought back to almost snatch it late on. Fonua-Blake aside, the Manly forwards were kept very quiet. Jorge Taufua scored a double and ran for a team high 179 metres.

I honestly saw nothing other than a big Tigers win here following last week’s momentum starting win over the Sharks. I had a Tigers fan message me saying he was sure they would lose but I couldn’t see it. Unfortunately for the Tigers he was exactly right. Benji Marshall looked to have iced the game late on only for the Tigers to completely fall apart and concede a scrappy try to drop the competition points. This, unfortunately, was typical Tigers and I should have seen this coming. David Nofoaluma is enjoying an incredible start to the season and had another monster game here.

The Sharks kickstarted their 2020 season with a comfortable win against the Cowboys is Townsville. The 26-16 win wasn’t their best ever performance however it was exactly what they needed. Jesse Ramien looks massive out wide in a man of the match performance. Ronaldo outside him also put in a huge effort. Shaun Johnson was the definition of 5/10 being that he had some moments of brilliance combined with some shocking moments. The Sharks looked much better with Matt Moylan in the line and Kennedy in the one. I would be shocked if Chad Townsend is named anywhere but outside the 17 this weekend.

The Bulldogs have their first win of the 2020 season after a comprehensive 22-2 win over the Dragons. Despite falling 2-0 behind inside the opening four minutes, the Bulldogs never really looked like they would be beaten here. Moving Will Hopoate to fullback was a brilliant move. He improved the attack almost instantly. Dallin Watene-Zelezniak’s 270 metres shows his talents on the wing and justified Dean Pay’s decision. This was a brilliant, drought-breaking win for the Dogs. Foran looked good on his return.

The Titans are on the board! The Gold Coast side recorded their first win in a full calendar year with an almost last minute win. I fully admit that I stood and cheered with Philip Sami dove on that ball with three minutes to go. Moeaki Fotuaika is an absolute monster up front and a huge star on the rise. Ash Taylor looked far calmer in the six while Jamal Fogerty looks like a long-term number seven. How good was it to see Keegan Hipgrave cross the line? Bit of a fan of the wild man. Huge win.

The Bunnies look a step or two off the pace. Their only win this season came through a mistimed pass by an out of position centre. Their forwards were outplayed and their 63% completion rate was super frustrating to watch. A hugely shocking stat was that the Bunnies made 45 tackle breaks while only conceding 18. There’s obviously talent there however the Bunnies need to get their forwards going. Murray at 13 was an improvement however Burgess and the bench forwards looked like passengers. Their bench (Knight aside) is probably the least effective right now.

It’s not often that a side will drop seven positions here but if not for two sides who can’t find the line, they’d have fallen further. This was the worst “effort” I can remember from any side not expected to finish 16th. The Broncos deserved their 59-0 flogging. They were awful in every sense of the word. I try to find something positive for every side, however the only positive here is that it wasn’t 60. Anthony Seibold is under huge pressure right now.

The Warriors fell from great heights after last week’s brilliant performance. The Warriors were routed 26-0 at the hands of the Panthers and despite the win last week have to go right back to the drawing board again. Tohu Harris ran for 224 metres in a huge effort while RTS continued to be the heartbeat for the entire club. These performances are going to be apart of the Warriors 2020 season, there’s no way around it.

I’m going to keep this short and “sweet”. The Dragons were awful last night against the Dogs. They looked a far distant second in everything other than the opening few minutes. If they can’t aim up this coming week against local rivals the Sharks, then there are bigger problems than just their coach. Adam Clune played well on debut.