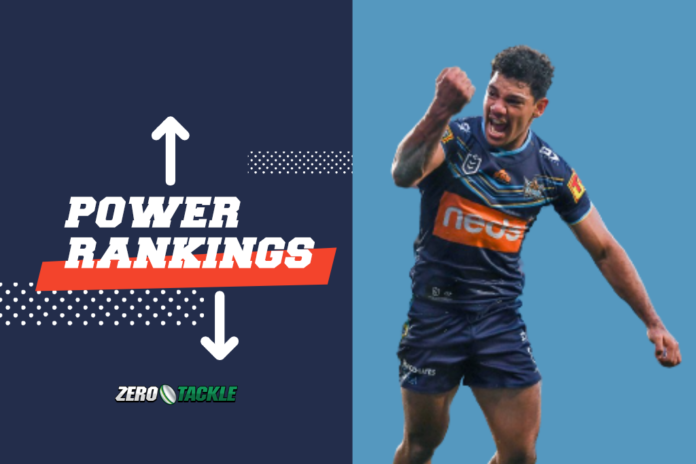 The Panthers were every bit as good as their 48-0 win over the hopeless Sharks suggests. Nathan Cleary is in another world right now and had the ball on a string.

The Panthers’ right edge dominated this game with young Staines scoring his second career hatty against Cronulla. Stephen Crichton put his name in Origin contention with a monster effort. JFH is undoubtedly the top prop in the game right now and I won’t hear any arguments. Dominance!

Can we finally, FINALLY admit that the Eels are for real yet? Please!? All the talk post game has surrounded the horrible knee-first tackle by young Dylan Brown, but it’s worth remembering the Eels put the Roosters away to the tune of 31-18.

Ryan Matterson was very dominant on that right edge in a big 80-minute performance. Gutherson, Papali’i and Moses were all again huge. Junior Paulo wrapped up an Origin jersey with a boss effort. How good is Cartwright?

I said last week that this could be a statement game for the Storm and the 50-0 score line suggests it was just that. The Bunnies were down some troops but the Storm were unstoppable.

Josh Addo-Carr scored SIX tries down the most lethal of left edges. Jahrome Hughes is playing better and better every single week. Christian Welch will be one of the first players picked for QLD. Nicho Hynes has meant Papenhuyzen has hardly been missed. Incredible side.

You do the math 🔥

The positives: The Bunnies were down some serious talent on Thursday evening.

Cam Murray, Adam Reynolds, Latrell Mitchell and Campbell Graham (as well as the already injured Mansour) were all missing, which takes some of the pain away from the 50-0 loss to the red-hot Storm.

Cody Walker playing at fullback was a strange choice however given the players missing out wide, Bennett perhaps had no chance. Moving forward Bunnies fans.

The Cowboys maintained bragging rights over their QLD neighbours thanks to a late try and a field goal to Valentine Holmes. Jason Taumalolo was back to his monster best with 231 metres and the match-tying try.

Jake Clifford was very good on return. Their 80% completion rate ultimately decided this contest as the shear weight of possession told. The Cowboys look a completely different side following their big loss to the Sharks earlier in the season.

Well … Hasn’t the season turned around for Manly since the return of Tommy Turbo? Trbojevic put in one of the most dominant performances in memory with two tries, five line breaks, 235 metres, three line break assists, four try assists and eight tackle breaks.

Those are NRL Live type stats for the superstar. Jason Saab continued his brilliant season, scoring three tries. The 38-32 win was closer than it probably should have been.

The Roosters suffered yet another long-term injury in their 13-point loss to the Eels on Friday night. Matt Ikuvalu scored a hatty and kept his side in the game as the under-manned Chooks simply refused to go away.

Nat Butcher made an incredible 70 tackles. Massive! Daniel Tupou looks locked in a two-man battle against Brian To’o for that Origin wing spot. He was the leading metre again again here for his side. Joseph Suaalii surely isn’t far off!?

The Dragons needed this win in the worst way, and despite a HORRIBLE first half, they ran riot in the second half.

Up 6-0 at half time, the Red V ran in five second-half tries to dust the Dogs 32-12. Matt Dufty was in everything and is surely worth a contract extension. Paul Vaughan and Josh McGuire dominated the middle and put the likes of Hunt and Norman on the front foot.

What a second half by the Knights. Trailing 16-0 at halftime there was a very real chance of this game slipping away. Phoenix Crossland’s 41st minute try completely changed the game and was the first of four unanswered second-half tries.

Jayden Brailey’s 77th minute try was exactly what his incredible efforts deserved. Ponga and Frizell were both among Newcastle’s best. Can copy and paste that every week. The first half is best forgotten.

For the third week in a row the Titans came out of the blocks like title-favourites. They blew the Tigers off the park with three tries inside the first 15 minutes.

This time they were good enough to hold off their opponents, however did concede 28 points. The likes of Kelly, Brimson and Sami all had field days out wide while Peachey and Fifita continued their incredible seasons. The Fifita tackle was awful and he’ll miss time in the only real downer.

The Warriors were right in this and could have forced this into Golden Point despite allowing Manly’s back line to go ballistic.

Roger Tuivasa-Sheck was again a star in a beaten side. Tohu Harris is the rock in the middle. Chanel Harris-Tavita looks like a footballer. He and young Walsh have plenty of talent in what looks like a potential long-term halves combo.

A lot to like here, as usual, from the Warriors, although ultimately another close loss.

Is it officially a crisis yet in the nation’s capital? Leading the Knights 16-0 at halftime it looked as though the Raiders were back in business, only to fall away and be reduced to spectators in the second stanza.

Tapine was bossing the middle until injury ended his afternoon. Canberra were seen as a genuine title-challenger in the pre-season but nothing over the past month suggests they will live up to those expectations.

The one that got away for the Broncos. Leading 18-12 with seven minutes to go, the Broncos let Taumalolo score and then conceded a Valentine Holmes field goal. Their completion rate dropped below 70% which proved the difference.

Earlier I said JFH was the best prop in the middle but Payne Haas will soon be pushing him close. The guy cannot be stopped in the middle. Carrigan’s ACL injury was a horrible outcome on top of them losing Coates to the Storm.

Pretty rough to score 28 points yet still lose but that’s the Tigers game right now. Adam Doueihi’s talents cannot be understated. He has been the best half for the Tigers all season … so of course he’ll play in the centre this weekend to allow Moses Mbye to fill in. I don’t get it.

David Nofoaluma had five minutes where he was literally unstoppable. Conceding three tries within the first 15 minutes was always going to make it tough.

Another case of brave but not good enough. The first half of this game was absolute tripe and should be placed into a vault never to be seen again.

The second half saw the Dragons run in five tries to two. Kyle Flanagan was so bad he was hooked but had to return as the Dogs ran out of troops.

Kyle Flanagan breaks down when asked about his dad's advice following his benching 🙏 #NRL pic.twitter.com/Qop0j8x6uS

Luke Thompson ran himself to exhaustion but his ‘effort’ on Paul Vaughan was NSW Cup garbage. Renouf Atoni is a weapon and has a huge future.

Words cannot describe how awful the Sharks truly were on Friday evening. The 48-0 score line, if anything, flattered the Sharks.

Up to 10 of their starting line up would struggle to make any other side in the competition right now. The only highlight was that Josh Hannay finally made a decision in hooking Chad Townsend. Hopefully the message was received by the other sulking players in the squad. God awful!