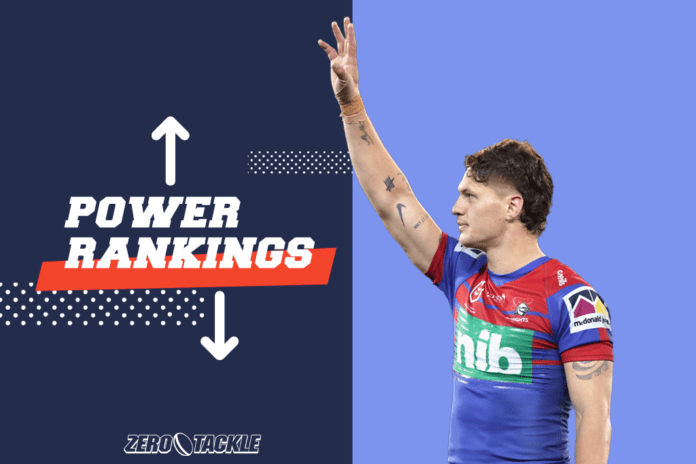 Well, this game was a lot closer than any of us expected, but the Panthers remain undefeated in 2021.

Jarome Luai was, again, the star of the show yet continues to be neglected by Dally M judges. I swear Nathan Cleary is the most dangerous player in the competition after 70 minutes. What a two-point drop goal!

JFH is arguably the best prop in the game right now. The Panthers were largely contained by the Broncos on Thursday evening but managed to win. Undoubted title favourites.

The great escape! History made! The Bunnies managed to beat a desperate Tigers outfit in the most crazy of golden point finishes imaginable on Saturday evening. I’d argue they were outplayed but managed to do just enough to capture the competition points.

They have a big month coming up and will be without Latrell Mitchell, who faces a four-week suspension. Cameron Murray was incredible. Thomas Burgess scored a ridiculous game-winning try after topping the metres with 206.

Message sent! The Eels responded from their horror loss last Sunday with one of the best performances of the season for any side.

They absolutely spanked the high flying Raiders, in Canberra no less, sans their form half. Isaiah Papali’i was unstoppable out wide and has made it impossible for Brad Arthur to drop him for the returning Matterson.

‘King Gutho’ was superb while Mitch Moses had, by far, his best performance of the year. Reed Mahoney is making a huge case for Origin should Harry Grant not be available.

The Storm recorded a comprehensive win over fellow title-challengers the Roosters on Friday night. All of the post match talk has surrounded a series of HIA decisions but we shouldn’t look past the relative ease the Storm disposed of the Chooks.

Cam Munster was the difference here, although Christian Welch and big NAS certainly provided him the platform. Harry Grant looks close to full fitness and looks ready to set the competition alight. No idea how Ryan Papenhuyzen passed his assessment.

This was the exact game that Roosters fans were hoping not to see. Sam Walker was kept very quiet and looked out off his depth against a supremely drilled Storm outfit. He’ll learn plenty from the clash.

Held scoreless until the literal last minute, the Roosters really missed Brett Morris out wide. Daniel Tupou continued his huge season. Why are teams insisting on kicking to the eight-foot tall Origin winger? Strange times. JWH being reduced to just over 10 minutes was hugely telling.

Blip or reality check? The Dragons fell on Sunday afternoon to the Warriors despite a loud home crowd. Matthew Dufty had the most Matt Dufty game ever. At times he looks as though he could play rep footy, while at others he looks like a part-timer.

Rugby League is more fun when Cody Ramsey is scoring tries. Josh McGuire had a dominant debut while Paul Vaughan was also huge in the middle of the park. They have a week to plan for the biggest game of their regular season.

The Knights returned to the winners circle via a less-than-convincing but very welcome victory over the Sharks. Kalyn Ponga was the star despite battling illness for the majority of the game.

Brodie Jones made a name for himself with an enormous effort out wide. Kurt Mann was very good while Blake Green is solid as a rock. They left this late but considering their outs, this was a huge win.

Saifiti and Klemmer were both very good but Tyson Frizell put in a worldly performance against one of his old sides.

This was … unexpected. The Raiders were, easily, played off their own patch by a travelling and far better Eels outfit.

Ricky Stuart made some curious comments in his post-match press conference suggesting that some of those players out there weren’t first graders and made some major calls at the selection table.

One player to escape Ricky’s wrath was Caleb Aekins, who was the Raiders best. Jarrod Croker looks off the pace. They need more from their star halves.

Roger Tuivasa-Sheck! Roger, please don’t go. Please don’t leave our game, I beg of you. RTS had an absolute monster game on Sunday and took the game away from the Dragons.

Tohu Harris continues to lead the way in whatever position he is asked to play. How about that completion rate? 40 from 40! How un-Warriors like? How can you beat a team who isn’t giving up possession? Great win for the Warriors. What a bounce back from last week’s shock loss to Manly. RTS!!!

Yikes. This was total and utter destruction for the poor, old Titans. The six-try mauling will have Justin Holbrook fuming. They were awful. Couldn’t hold the ball, couldn’t tackle.

Seriously thought I saw the Titans outside backs stopping to ask Turbo for an autograph at one point. Corey Thompson should have been chaired off such was his effort. Otherwise this was awful.

The Cowboys probably made this harder than it needed to be but ultimately secured their second straight win in a row.

Reece Robson and Jake Granville took turns in destroying the Dogs’ middle pack. Valentine Holmes looked both a world-beater and a reserve grader within 80 minutes. They weathered the storm after Hetherington was sent off and iced the game with a clever run from Mitch Dunn. Job done.

Tommy Turbo! I feel I could just copy and paste his name 30 times here. He was incredible. Manly were incredible.

The Sharks, on paper, don’t deserve to drop four spots despite back-to-back brave losses. The facts though dictate that the side were unable to ice games against rookie halves and then journeymen halves.

This is feeling like a gap year for the Shire club. Surely the club has to move on from Chad Townsend quickly. Ramien’s second straight week of giving away match-losing penalties has to come up.

Josh Hannay has some huge choices ahead. Johnson’s likely return is welcomed. Teig Wilton and Connor Tracey were again incredible out of position. Talakai was a huge in.

The Broncos were downright incredible for the majority of this game. I’m of the opinion that if Cleary or Luai swapped sides for the final 15 minutes then the Broncs get home.

Tevita Pangai Jr was an absolute monster and would have won man of the match if the home side managed to pull off the upset of the season. Payne Haas looks like he’s in for an incredible season.

Corey Oates added so much upon his return. The Broncos looked fit and committed. Good signs. Milford’s QLD Cup stint looks like it will continue.

The Tigers deserved to win this game. They were a literal finger tip away from the most unlikely of wins.

Daine Laurie is an absolute revelation. What a signing he has turned out to be. He scored yet another try whilst running for 149 metres.

Adam Doueihi is the side’s main strike half and looks better with every game. They have a good one in young Jake Simpkin. A lot to like here despite the loss.

I honestly don’t know what to say here.

Ultimately another loss for the Dogs, and against an equally struggling side, but they had some great moments. Kyle Flanagan had his best game for the club, Renouf Atoni was in beast mode while Corey Allen looks at home in the centres.

Jack Hetherington’s send off all but ended this as a contest, although I’d argue the Dogs responded very well to his dismissal.