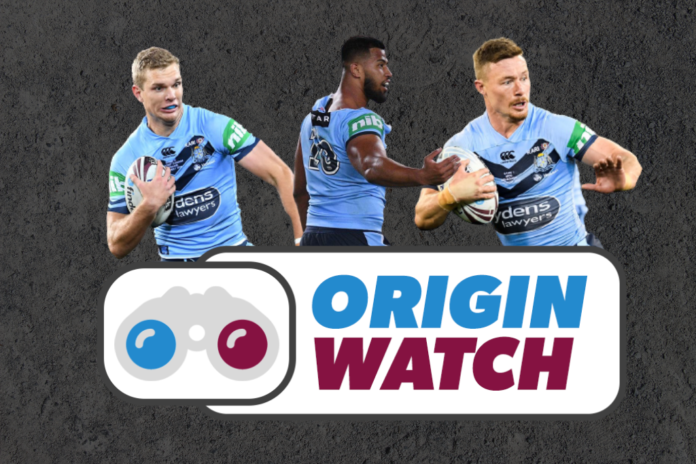 With NSW about to announce their squad for Game I, below isn't necessarily our team of choice, but the side we expect to be named.

Forget calls for Turbo or Papenhuyzen to take over at one, Teddy is still the man. I maintain NSW would have won the series last year if Teddy hadn't exited through concussion.

He has been the Blues best player for many years now and should be a multiple time Player of the Series. Legend!

An automatic selection on the wing in any side. Addo-Carr has enjoyed a brilliant Origin career to date and is one of the most dangerous players in the competition.

His speed means his opposition winger, and fullback, can never take their eyes off him. 'The Foxx' has a huge role to play.

I would be picking either a full-time centre or Latrell Mitchell here but I just can't see Fittler overlooking 'King Gutho'. He absolutely loves the Eels star.

To his credit, Gutherson had his moments at centre in last years series. Again though, this is purely a prediction and one I hope is incorrect.

Turbo is the reason coaches believe fullbacks can star at centre. There is literally no other player in the game like the Manly megastar. If fit, he HAS to be there.

Origin II in 2019 was the most dominant performance from a centre since Inglis retired. He was unstoppable. Doesn't matter where he's named, he will be given a roaming role and will play as required.

The Penrith winger's form simply can't be ignored. I expect him to get the nod above Daniel Tupou, although I won't be shocked if it does go the other way.

To'o will be tasked with bringing the ball out of his own end all night and there's no one better in the competition right now. Built for Origin. Can't wait for him to run out.

Freddy HAS to pick the red hot Luai. The Panthers combo is destroying everything in its path in 2021. It's an advantage QLD have no hope of matching.

Luai has easily outplayed both Walker and Wighton and if he is overlooked for either of the aforementioned options, it'll be a massive injustice.

The form player of the competition and the first player picked. This is Nathan Cleary's side now for as long as he wants it. The Blues trump card. He's yet to really hammer home on the Origin stage but 2021 is the year.

The side will be built around him but ultimately Cleary will decide where the Shield ends up come the end of Origin III.

There's a chance he may enter from the bench, however I think you have to lead with your biggest and best, and young Payne is both of those.

An absolute wrecking ball capable of blowing a game open. His offload will be a huge weapon. Look for 'Tommy Turbo' to follow Haas all night looking for second phase play.

Truthfully Cook's form has been well down in 2021 but he has shown glimpses of blowing games open. The Blues NEED their number nine to be among the best players on the field to gain an advantage.

His speed out of dummy half is unmatched. Early on he just needs to get the ball to Cleary and tackle his heart out.

Another who may enter from the bench, but Saifiti's previous Origin efforts make him the run on for mine. He's been great for Newcastle all season despite their current woes.

He was a shock selection when first named, however it's tough to imagine a NSW front row without him now.

The best second-rower in the game. Yes, I said it. The Roosters superstar is set for a huge series as he effectively replaced Boyd Cordner.

He needs to be the go to wide-running forward for the Blues all series. If he has a big series it goes a long way to rescuing back the Shield.

Following last year's series I said that was it for Frizell. He has been one of Newcastle's best all year and looks a completely different player.

One of the most experienced players on the park, he needs to win his one on one battle, especially if marked up against David Fifita.

With Cam Murray injured I believe Freddy will stick with Jake Trbojevic. His form has been down throughout the year however has lifted massively in the last few weeks.

His efforts against the Eels were massive and guaranteed him a return to the Origin arena. Will play the opening 20/25 minutes and needs to win his direct battle with Tino.

Six weeks ago I didn't even have RCG in my top 25. However his recent form has been so damaging that he simply cannot be overlooked.

I think Fittler goes with two genuine props here over say a Dale Finucane or Nathan Brown. RCG could start if required. We know Freddy likes his late switches in the middle.

Will probably feel hard done by in being overlooked to start but Yeo HAS to be in the 17 somewhere.

I would start him but I can also understand bringing him on with 10 minutes before half time to run hard and often. Was great last year in difficult circumstances.

Paulo is having yet another big season for the Eels and will join his run on teammate RCG from the bench. He made a few errors last year but will be better for the experience.

His offload is SUPER dangerous and is a weapon the Blues will look to exploit just prior to half time. Watch for the likes of Cook and Teddy to trail.

I went back and forth on this selection multiple times. It may be Wighton, it could even be Gutherson if Latrell is named at centre, but Freddy will name a utility player.

Walker can sit and be injected where and if needed. It's cover for Luai, which I don't usually like, but Walker can blow a game open and was in frightening form prior to being forced into playing fullback.