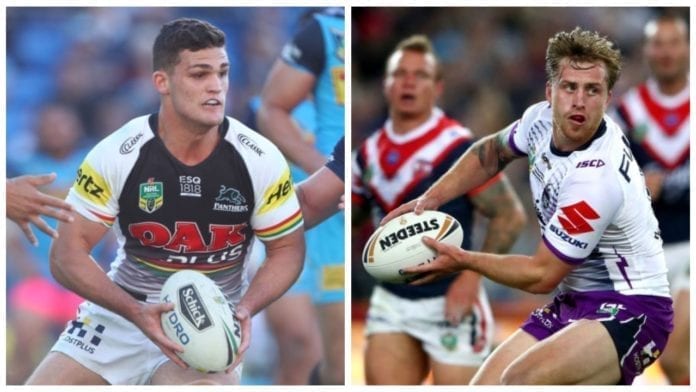 I fully admit, I did a full Grand Final preview last night on my Podcast without knowing who I was going to tip until the end. I overthought it and again now I’m not sure which way I’ll go.

Much like in year’s gone by, I’ll be applying a scientific method of sorts. Below is the breakdown of each position in hope that a clear cut winner will emerge.

This is a battle between two young star fullbacks in prime form. For the Storm you have the speedy number one who is almost allergic to being tackled. For the Panthers you have the super consistent, metre eating machine fresh off a Prelim winning try.

Edwards has improved out of sight this season while Papenhuyzen has become one of the game’s most exciting custodians. Expect both to have big games, however the Storm freak is more likely to bust the game open at any time.

This is a battle I simply cannot wait to see. For the Storm you have two of the most prolific try scorers in modern Rugby League, both of whom have speed to burn. For the Panthers you have one of the game’s most dangerous power runners in Josh Mansour and the freakishly talented Brian To’o.

The Storm wingers have the advantage in attack, however I’d also back the Storm wingers to be the ones making errors. The factor here is you ALWAYS go with the combo containing the Foxx!

Centres: Olam and Lee vs Naden and Crichton

Sign me up for this one! Justin Olam has been an absolute wrecking ball in 2020 for the Storm, while Brenko Lee has again shown that Craig Bellamy can turn any half decent footballer into a star.

For the Panthers we have the form centre of the competition in Stephen Crichton and the exciting, try scoring machine that is Brent Naden.

For the record I’m picking Naden over May every day of the week. Crichton’s form is sooo good right now. Penrith edge this one due to his attacking threat.

The game will be decided here. I know the forwards lay the platform and the wingers score the highlight reel tries, but these two sets of halves will decide this game.

The Clive Churchill will HAVE to come from here if Penrith are to win this contest. Munster has been the first half picked for any side at rep level for years, while Hughes has justified every belief shown in him by Bellamy.

Nathan Cleary has been the best player in 2020 and if not for the form of his young halves partner, would have won the Dally M by a mile. Munster’s recent record in Grand Finals has not been great. Penrith here for mine. Form is undeniable.

Truthfully this was the first battle I didn’t have to go back and forth on. Bromwhich and Welch are both rep quality front rowers with big name experience, but the form of JFH and James Tamou has been at a different level.

I honestly can’t think of a contest they lost all season. The discipline levels here are world’s apart. Melbourne’s big men have a penalty in them to say the least, meanwhile the Panthers props have given away less combined than the majority of props on their own.

If this game is not won in the halves, it may very well be won here in a tremendous battle of the nines. What more can be said about Cameron Smith? He’s the best big game player I’ve ever seen.

Api Koroisau has had an incredible 2020 and a big performance in the biggest game of the season is very much on the cards. As good as Api is, you can’t go against Cameron Smith in any game, against any opposition. Smith. Storm.

Seriously, we are so spoilt! Kaufusi is one of the game’s elite second rowers, Bromwhich is approaching that level/status also, while NAS is a monster of the highest order.

Kikau is the game’s most damaging wide running forward, Liam Martin will be picked for Origin regardless of result, while Yeo was just named lock of the season. This is going to be a battle for the ages!

I can’t go past Kikau here. He could bust this game wide open. I expect NAS and Finucane may switch late. I love this Penrith back row.

It’s no coincidence that the Grand Final features two of the best benches in the competition. Neither side loses anything when they’re bench players are called upon.

Tino and Finucane run on for the large majority of sides. Brandon Smith is the game’s best bench player and can do literally anything. Hynes is a secret weapon if called upon.

Penrith’s bench has been special all season. May can change the game, Capewell has had a career best season, Tetevano is a weapon and Leota may play Origin on the back of his performances this year. Close but the Storm edge this one.

The Coaches: Bellamy vs Cleary

On field, this game is SOOOO close. It may very well come down to coaching. On one hand you have Ivan Cleary who has completely revolutionised the Panthers across 12 months. On the other hand you have the greatest coach of the modern era in Craig Bellamy.

Two masters of their craft, I have no doubt both men will have their respective sides primed and ready to go for the biggest game of many of their careers. Cleary could enter his name into the history books if he can outsmart the master here.

For mine though, Bellamy is the best in the business. If it comes down to coaching, Bellamy is in another world. Way too much experience.

VERDICT: Storm … JUST! The experience of Cameron Smith and the ability of Craig Bellamy to pull a rabbit out of the hat at any given time makes them deserved favourites. Storm 16-12

Knights duo to miss the start of 2021

What your club needs for 2021: Roosters