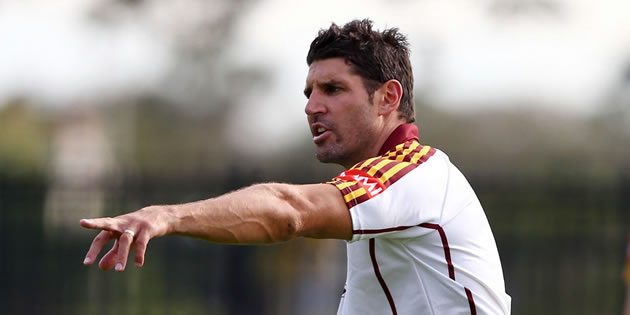 Newly appointed Bulldogs coach Trent Barrett isn’t ruling out a move for another Penrith player, while stating he sees exciting comparisons between his new squad and the 2020 minor premiers.

Canterbury announced the signing of Josh Addo-Carr to a four-year deal from 2022, adding to the club’s impressive recruitment in 2020.

New signings Nick Cotric and Kyle Flanagan are set to for key roles under Barrett, with former Panther Jack Hetherington set to be joined by ex-teammate Matt Burton at Belmore by the conclusion of next season.

The Bulldogs missed out on exciting Panthers youngster Spencer Leniu after the prop decided to sign a contract extension with Penrith, but that hasn’t kept Barrett from attempting to lure a number of players away from the mountains.

Off-contract centre Stephen Crichton has been previously linked to the Bulldogs and would be a massive gain for Barrett’s hopes of ending Canterbury’s finals drought.

Speaking to Sky Sports Radio, Barrett said he would love to add some of Ivan Cleary’s finest to his Bulldogs squad.

“There’s a few out there I wouldn’t mind,” he said.

“I don’t think I’ll be welcome back there for a while.

“There’s still spots there. We’re still working hard behind the scenes to fill them, we’ve got a couple of good kids here in our juniors too that if we don’t get who we want or we can’t get them for the following year, that we’ll probably bring through.

“We’re still working really hard there and we’ve got room but there’s probably only two or three that we’ve really targeted that we want to bring in.”

Barrett added that he sees some similarities between his squad and the current Panthers, who are favoured for the 2021 premiership, namely between Flanagan and Penrith star Nathan Cleary.

“There is some similarity between Nathan Cleary and Kyle Flanagan,” Barrett said.

“Kyle will have his hands on the ball a lot as did Nathan.

“There will be a few things that we will change because it depends on personnel.

“My job as a coach, especially in attack, is to get our best players the ball at the right times on the right part of the field and blokes like (Viliame) Kikau and (Stephen) Crichton – we were a little bit lucky with them out at Penrith.

“We’re getting there now, (Raymond Faitala-Mariner) is one that’s stood out for me. There’s a bit of Kikau about him actually, he’s a big body and a bit of a weapon on an edge.

“Our attack will morph into sort of what it wants to be through the course of the year.

“At the start of the year it’s just really important we complete our sets, defend really well and hang onto the footy.”

Storm look to former referees boss ahead of premiership defence

QUIZ: What year did these players make their NRL debuts? Part...