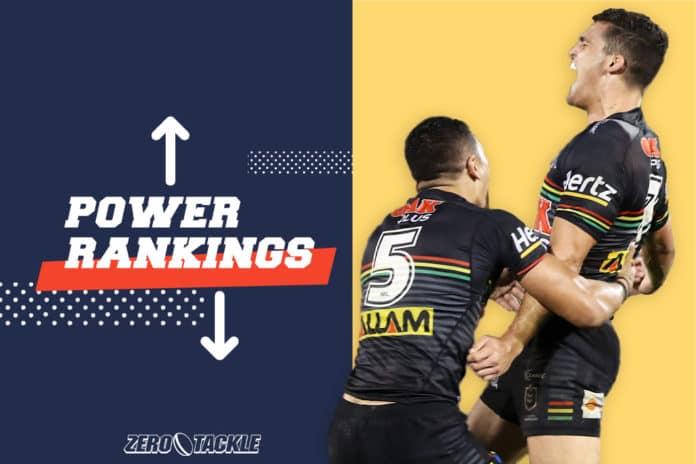 For those who haven’t seen our Power Rankings in previous seasons, the below are weekly rankings based on results, expectation, quality of performance and quality of opposition.

Here are our week one Power Rankings:

Penrith pulled off THE upset of the week in defeating the reigning back-to-back Premiers the Roosters. The 20-14 win in front of a very excited crowd at the foot of the mountains completely ended the aura of invincibility of the visitors. Kikau defied what looked initially like a very serious injury to score the winner in the 69th minute. It capped off an incredible comeback after the Tricolours raced to an early 12-0 lead. Api Koroisau was best on ground on his return to the club. Cleary looked very good. Great signs in round one for the Panthers.

Melbourne continued their incredible Round One winning streak alive by besting their old sparring buddies at Brookvale Oval. The three tries to none win was everything that they deserved after holding a rampaging Manly team at bay for 80 minutes. Suliasi Vunivalu scored a double, in incredible circumstances off the boot, before Tom Eisenhuth iced the game in the 74th minute. As expected this game was won in the middle, with the Storm winning the metres battle by almost 400 metres. Tui Kamikamica was a monster with 192 metres. They held Manly to zero line breaks. Incredible.

The Knights recorded arguably the performance of the round, but truthfully are scaled back due to strength of opponent. They didn’t concede a single point, for the first time in a long time, and deserve a high ranking having topped the NRL table at the completion of the round. The 20-0 win came on the back of the usual suspects at Ponga was electric, Klemmer was tough to stop and Pearce controlled the game. Jayden Brailey was very good in defence and seemed to held the Knights control the middle. They’ll face much tougher competition but couldn’t have done much more.

The Broncos played spoiler by defeating the Cowboys 28-21 on Friday night. David Fifita’s solo try may have ensured we’ve seen the best solo try of the season in the very first week of action. His 70 metre run will live on in highlight reels for many years to come. Payne Haas also delivered in a big way, playing 80 minutes at prop. Jamayne Isaako was very good despite a heavily disrupted preparation. Brodie Croft played well on his club debut while Milford and Turpin both also put in good shifts. Pangai Jr’s suspension was the only negative to come out of an otherwise very positive night.

Canberra started their season with a fairly routine win over the Titans. Jack Wighton started the season like a man possessed, scoring two tries in the opening 14 minutes. Josh Papalii’s 172 metres shows how hard he is going to be to contain in 2020. Six line breaks, albeit against a side not really expected to shine this year, shows Canberra have hit the ground running. The stats here weren’t as lopsided as I expected after watching the game, but Canberra were well in control for almost 80 minutes and will be a big factor again this year.

The Tigers held on in the Gong to record a win they might have otherwise have let slip. Originally I thought the Dragons beat themselves by bombing three clear cut try scoring chances, however a look at the stats suggests otherwise. They ran for 600 metres more than their hosts, completely dominating the middle. They too missed a few opportunities and probably deserved the win. Didn’t Benji Marshall turn back the clock? He looked incredible and controlled this game despite missing his halves partner. Good start.

The Bunnies dominated this game from start to well into the second half yet probably should be sitting 0-1 if not for a panicked pass by an out of position player. I cannot for the life of me believe the decision to bring Mitchell off. The Bunnies were absolutely cruising here yet forgot how to football once Shaun Johnson woke up from a mid game nap. They were able to score despite being a player down just before halftime but honestly that last 10/15 minutes will leave a filthy taste in Bunnies fans mouths despite the win. Liam Knight is a monster and very deserving of the three Dally M points.

The Eels started their campaign with a win, albeit a less than convincing one. All the talk heading into the season opener was Eels by how much, but neither team read the script. Mitch Moses was kept quiet, while Blake Ferguson and Maika Sivo did not see the stack of opportunities I expected. Gutherson made a mountain of metres but was inconsistent. Truthfully only a lucky try to the talented Mahoney decided this. We’ll see far better Eels performances this year but good sides can win ugly. Boy was this ugly.

The Sharks were one show and go away from upsetting the Bunnies despite being out of the game for 70 minutes. The Sharks penalty happy defensive gameplan shockingly didn’t work and allowed Souths to walk up the field at will. Conceding a try to an overlap despite having a player over is unforgivable and is far more the reason for this loss than the Tracey pass. Johnson had moments of absolute brilliance which was encouraging to see. Katoa sure knows how to score a try no matter what grade he’s playing. Woods had a belter and Rudolf looked great on debut. The HIA hurt them but ultimately they weren’t in the game until late on.

At 12-0 up after 20 minutes, it looked a case of business as usual for the back-to-back Premiers during their trip to Penrith. Mr Fix it and possibly the game’s most underrated Mitchell Aubusson kicked off the campaign with an early try, which followed an early penalty goal slotted by Kyle Flanagan. Taukeiaho’s barge over try before the 20th minute had Penrith fans settling in for a long night. From there though they failed to breach the Panther’s defensive line, adding only a penalty goal in the 57th minute. Hardly alarm bells for the competition favourites but this was quite the turn up.

Manly will be smarting following their first up loss to bitter rivals the Storm in the latest installment of the battle of Brookie. The 18-4 loss was made all the more frustrating for maroon fans by the fact that they couldn’t cross the line on their own home base. The Storm were largely able to contain the Sea Eagles monster pack keeping AFB, Jake Trbojevic and Marty Taupau very quiet. Morgan Boyle topped the running metres with 125 off the bench. Zero line breaks is perhaps the most shocking stat here. Not an ideal start but they held the Storm for 60 minutes so it’s not all bad.

This is the one that got away. How the Dragons enter round two with a loss here is beyond me. I honestly lost count of the amount of tries they butchered after at least three. That 59% completion rate though, if they had won it would have been a theft. That’s under 7’s stuff. They made 600 metres less than the Tigers. 600 metres! I take back what I said, they should have copped 40 here. Luckily Shane Flanagan has them defensively firing as a better side would have put them away. Still, if they held onto their chances, they win this game. Incredible.

The Cowboys unfortunately fell short in celebrating their new stadium opening with a win, but a late fight back will have fans breathing easier. Valentine Holmes was flashy on return but looked off the pace at times. Jason Taumalolo is not human although was relatively well contained. Esan Masters had a brilliant debut for the Cowboys and looks to be a brilliant signing. Drinkwater and Morgan have a long way to go as a halves combination. A late Ben Hampton try made this game closer than it probably had any right to be.

The Bulldogs were … well, the Bulldogs on Thursday night. They toiled, they fought but ultimately fell short. They did manage to hold the highly fancied Eels for 65 minutes, and the try they did concede had a fair degree of luck to it. I’d be proud of the performance if I were a fan, especially given the week they endured. That said, they didn’t exactly enjoy a potent start to the season with very few try scoring chances. The Dogs last tackle options and undoubtedly the worst in the competition. DWZ is a star, he’ll shine this year for the Dogs.

The Titans faced a tough away trip to the nation’s capital in round one but they really didn’t do themselves too many favours. 12-0 down after 15 minutes wouldn’t have had too many fans excited. Anthony Don scored in the 44th minute but outside of that moment, this was never a result in question. Yes it’s round one but a completion rate under 70% for a team likely to struggle to score points is not good. Phillip Sami is seriously underrated talent. The Titans are deadset cursed when it comes to injuries.

The Warriors enter their round 2 away home game having not registered a single point in round one. Premierships aren’t won in the opening round of the season, however to come up with zero points and zero line breaks is not all that encouraging. This week’s game will be distant on the player’s minds given everything that is going on, but they’ll need an immediate improvement. Eliasa Katoa looked good coming off the bench, but otherwise the Warriors forward pack struggled.

Warriors
ROUND 15 STATS
47
Tackles Made
38
All Run Metres