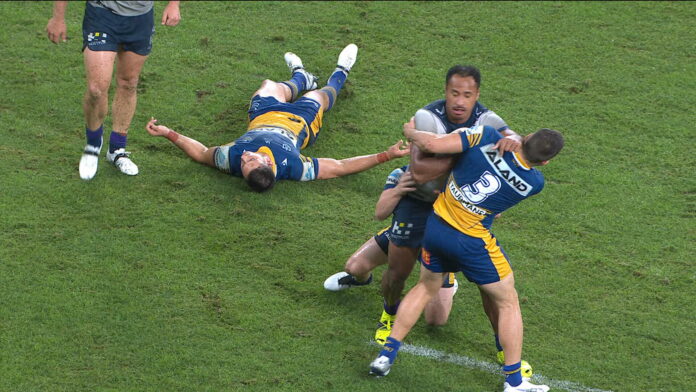 Melbourne Storm star Felise Kaufusi could find himself in hot water after being placed on report in the match against the Parramatta Eels.

An incident between Kaufusi and Parramatta's Ryan Matterson caused a serious concussion that forced Matterson from the field and he was unable to return during the Eels' 16-12 win over the Storm at Bankwest Stadium.

ON REPORT: Kaufusi could be in hot water after this shot concussed Ryan Matterson.

Kaufusi was placed on report after what looked like a stray elbow to Matterson's head as he was being tackled, which resulted in further trauma when Matterson's head hit the ground hard in the tackle, contributing to the concussion.

Matterson will need to go through the concussion protocols and pass before being cleared to play for the Eels next week.

If the NRL is fair dinkum about concussions - and they are - the Kaufusi forearm/elbow to the head of Matterson is a minimum 4 weeks and should have been a send off.
Anything less is just paying lip service to the biggest issue in the game.#NRLEelsStorm

The Eels will face off against the Sharks next up on Saturday, March 27 at Bankwest Stadium.

The Storm heads to Penrith to face the Panthers in a Grand Final rematch on Thursday, March 25 at Panthers Stadium.