The South Sydney Rabbitohs have managed four entries into this week's stats-based team of the week after their thumping victory over the Parramatta Eels on Friday evening.

The weekend's headline acts recorded a 26-0 victory over the blue and gold in what was a blitz.

The Cronulla Sharks were the other team to find plenty of success in this week's side with three entries.

Meanwhile, top-eight sides the Brisbane Broncos and Sydney Roosters had two entries a piece, while the Gold Coast Titans dominated the edge and the New Zealand Warriors the bench.

The Canberra Raiders and St George Illawarra Dragons were the other teams with players to make the cut this week, recording one entry a piece after their controversial clash in the nation's capital.

1. Latrell Mitchell (South Sydney Rabbitohs)
Latrell Mitchell's form since his return from injury has been simply out of this world, and without injury early in the season, you'd have to question exactly how well his side would be going.

211 metres from 14 runs, 9 tackle breaks, a try assist and 3 line breaks highlighted his performance in leading the Rabbitohs past the Eels on Friday. 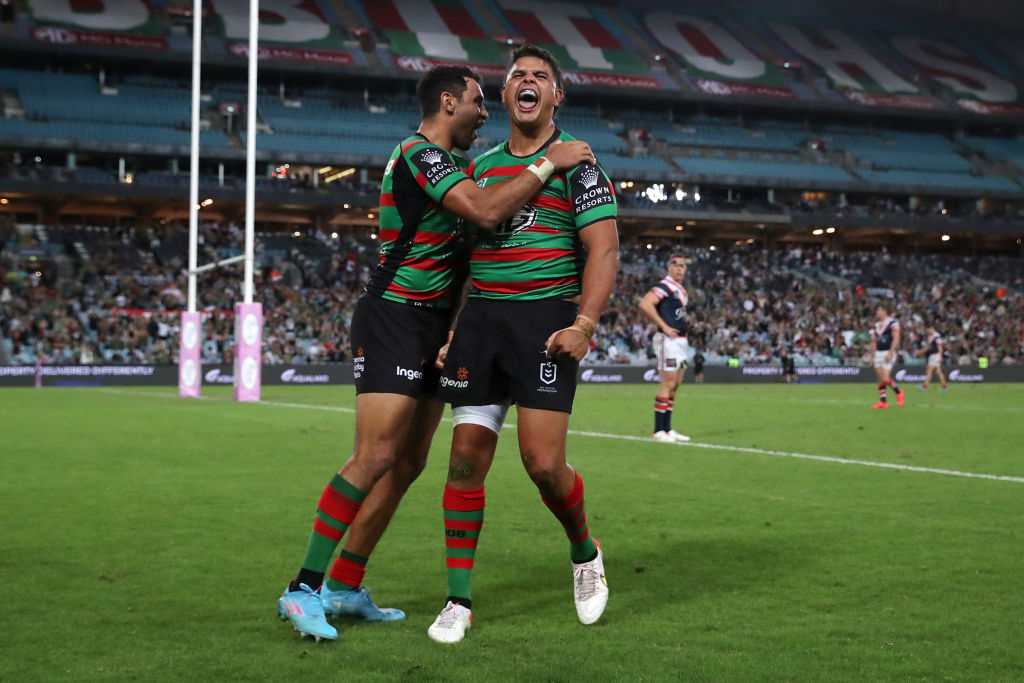 2. Selwyn Cobbo (Brisbane Broncos
The Broncos will hardly put their performance on Saturday against the Knights into the basket of excellence, but there is no question Selwyn Cobbo was outstanding.

After spending plenty of time out with concussion sustained during the final Origin clash, Cobbo has returned superbly, running for 196 metres and scoring a hat-trick against Newcastle.

3. Jesse Ramien (Cronulla Sharks)
Jesse Ramien making this side yet again won't come as much of a surprise after his outstanding effort in dispatching the Tigers on Saturday evening in Tamworth.

174 metres, a try, 6 tackle busts and a line break. His attacking game was strong, his defensive game equally as sound and his performances continue to go from strength to strength.

4. Matt Timoko (Canberra Raiders)
Timoko continues to grow into his role as a centre in Ricky Stuart's Canberra side, and while it wasn't a try which got him into this team, it was his work running the football and doing the hard yards for his team against the Dragons.

5. Alex Johnston (South Sydney Rabbitohs)
Alex Johnston is a try-scoring freak. There are few other terms to describe exactly how solid and consistent he has been at getting the ball over the line in the last couple of years.

While there is no doubt that Latrell Mitchell's return has helped in springboarding him back to his absolute best touch, he scored another double against Parramatta, running for 155 metres and making a couple of line breaks.

6. Talatau Amone (St George Illawarra Dragons)
It was a losing effort for the Dragons, but almost unarguably Amone's best game in first-grade since making his debut late last season.

Scoring a hat-trick, it was his ball-running which set him apart and made him a constant danger for the Raiders, ultimately carrying the ball nine times, making eight tackle busts and adding a try assist to play a hand in all four of the Dragons' tries. 7. Nicho Hynes (Cronulla Sharks)
Hynes was close to player of the week in his leading performance over the Tigers. Taking on the average defensive line of the opposition at will, Hynes ran for 223 metres, and came up with a try assist.

15 tackles with only a single miss also sets him apart defensively as a half.

8. Matt Lodge (Sydney Roosters)
The Roosters' middle third rotation, at its best and at full strength, will be one of the best in the competition. They proved that by dispatching the Cowboys on Saturday at the Sydney Cricket Ground.

Lodge led the way statistically, scoring a try, making 1563 metres and adding a trio of tackle busts to go with 21 tackles without a miss.

9. Sam Verrills (Sydney Roosters)
Verrills might have signed with the Titans from the beginning of the 2023 season, but he isn't showing any signs of slowing down between now and then, taking his game to a new level on Saturday.

35 tackles saw him lead the way defensively, but he also scored a pair of tries and ran the ball effectively to be an ever-present danger to the Cowboys' often reeling defensive line.

10. Payne Haas (Brisbane Broncos)
Haas has been at times an almost permanent fixture in this team throughout the course of the year, and it's no surprise to see an ugly win for the Broncos being led by the New South Wales Origin forward.

He ran for 184 metres and made 43 tackles in a no fuss 68-minute performance against the Knights on Saturday to make this team ahead of plenty of strong contenders, including Addin Fonua-Blake and Jared Waerea-Hargreaves.

11. David Fifita (Gold Coast Titans)
It's a Titan show in the back row this week after they dominated the Sea Eagles in a surprise upset win on Sunday afternoon.

David Fifita was able to remind everyone exactly what he is capable of after running for 167 metres from 13 carries and barrelling over for a try. 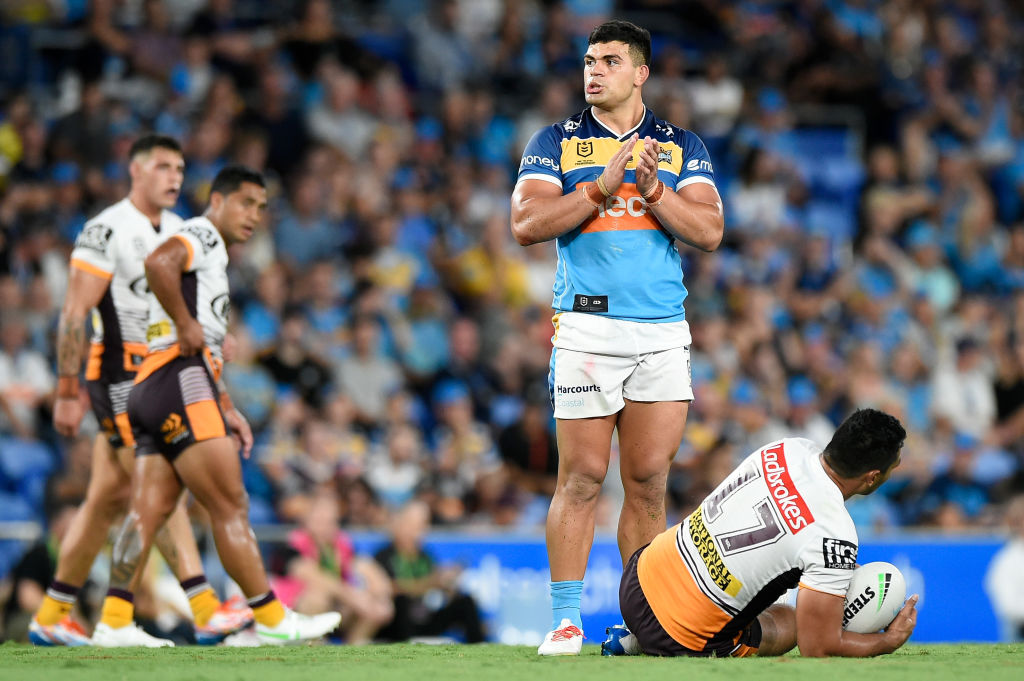 12. Beau Fermor (Gold Coast Titans)
Fermor is one of those players that just continues to improve everytime they get onto the field, and led the way for the Titans on Sunday with a double, 154 metres and an exceptionally high - and consistently impressive - defensive workrate.

13. Cameron Murray (South Sydney Rabbitohs)
In a game where there was barely a bad player on the park for the men from Redfern, Murray was electric in leading South Sydney through the middle third.

Running for 189 metres and making his tackles with minimal fuss, his ball-playing was superb and no one came close to knocking him out of the number 13 jersey this week.

14. Cameron McInnes (Cronulla Sharks)
It almost seems unfair to have a player like McInnes coming off the bench.

Playing almost an hour unchanged after getting onto the ground, his work rate in the middle third is almost unmatched across the competition. 138 metres from 14 carries and 36 tackles meant he was never being challenged for a spot in this week's team.

15. Josh Curran (New Zealand Warriors)
Curran coming off the bench and only playing 47 minutes is one of the NRL's great mysteries at the moment, however, he proved exactly what his side missed while he was injured earlier in the year, making 128 metres, tackling strongly and putting on an all-round impressive display. 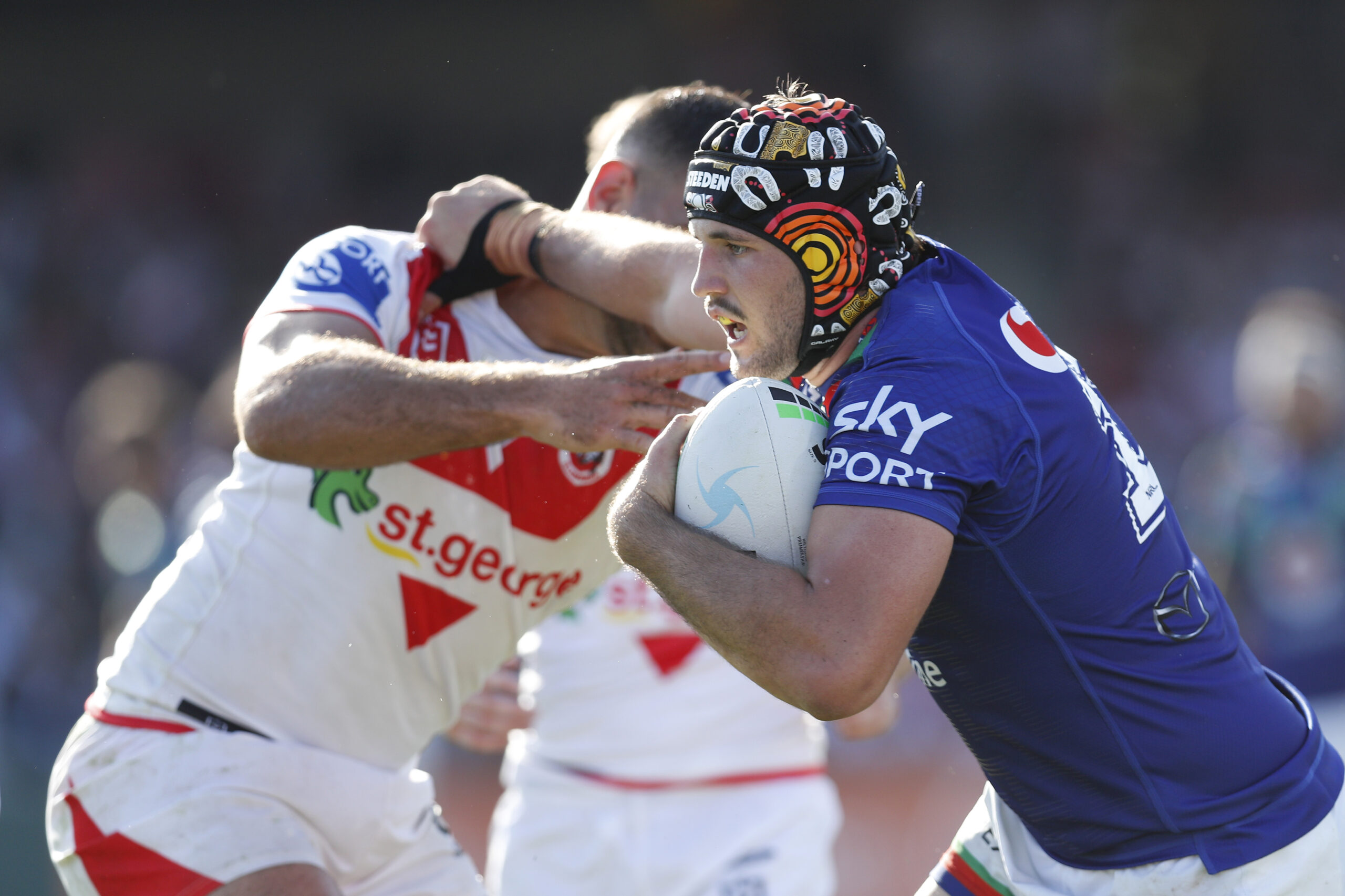 16. Braden Hamlin-Uele (Cronulla Sharks)
A late switch to the bench only made Hamlin-Uele all the more dangerous in Cronulla's 36-12 win over the Tigers on Saturday.

He played less than 40 minutes, but scored a try and looked dangerous everytime he got his hands on the football on his way to running for 91 metres.

17. Eliesa Katoa (New Zealand Warriors)
Katoa may have played less than half an hour, but reminded everyone why the Storm picked him up for 2023 with a try and 85 metres from nine carries in a performance where his impact off the bench was always a threat to Canterbury.