Which club has been most affected by injury/suspension?

When an important player misses time due to injury it will affect a team’s performance. Some team’s win/loss ratio changes drastically if a star player is in or out of the line-up that particular weekend. I looked into 10 important players from each team for each season over the past 3 years. What percentage of games were those 10 players able to play in each season to help their team win the premiership? The results: I tried to take into account mid-season transfers, as well as giving players credit for games missed due to Origin duties. Now this isn’t perfect; I picked those 10 players subjectively. So even though I tried to stay as neutral with my opinion on players as possible, there will be slight bias there. Nonetheless I think it gives an interesting insight into how losing an “top” player can affect each team, and how going through relatively injury free can be of great benefit. To touch quickly on the high and low:

With few clubs scoring above 90% for a season, I don’t think it’s any coincidence the Sharks claimed their maiden premiership in the same year there was a 97% play rate from 10 of their top players.

I am by no means saying this is the sole reason the Sharks were Premiers last year, but having such stability in their line-up with a talented group of players would have been a significant factor.

It is also worth mentioning the Cowboys here; to have back to back seasons above 94% in 2015 and 2016 no doubt contributed to their success in this time.

Injury Roundup Round 7 and 8

Ben Hunt has returned to light running as he continues his rehab for a grade 2 hamstring strain. With the rep round effectively giving him a "free week" of recovery, I would expect round 10-11 to be a realistic return for him. That would be a 5-6 week recovery

Widdop has a suspected “moderate to high-grade” MCL sprain, with scans to confirm on Wednesday. These scans will also be used to rule out any further damage (eg meniscus), but if the MCL damage is isolated the approximate recovery times for MCL sprains are as follows: Grade 2: 2-4 weeks, Grade 3: 4-8 weeks.

Takairangi went down with a suspected PCL injury in the Eels match on the weekend. At the time of writing scan results are unavailable, but hopefully, these come back with no other structural damage to the knee. It has been said his expected time out will be 4-6 weeks, which would correlate with a grade 2 PCL sprain.

Grevsmuhl suffered a dislocated shoulder which by reports was relocated quickly and smoothly by the medical staff. This is a good sign, and if he did not suffer any further damage (labrum(cartilage) or rotator cuff tear) his return should be in the 3-6 week range. If there is further damage this can involve surgery to repair and recovery time extends to months on the sideline.

On his first tackle of the Sharks' round 6 game Segeyaro fractured his radius (forearm bone). Unfortunately it was in the same location as the fracture he suffered in the 2016 season (from which he still has a metal plate in his arm). Segeyaro had surgery 2 weeks ago, and his recovery should be 6-8 weeks. I would expect him back after the Sharks round 13 bye.

Lussick suffered a fracture in his elbow which he claims was from a collision with Jake Trbojevic's head. He did not require surgery, and a 4-6 week recovery will have him aiming for a round 10 return.

David Bhana is suspected to have suffered one of the most gruesome injuries to happen on a rugby league field; a dislocated knee. Different to a dislocated patella (kneecap), a dislocated knee involves a dislocation of the tibia (shin bone) and the femur (thigh bone). This injury comes with ruptures of the ACL, PCL, MCL and often other damage as well. Bhana had the first of a two-part surgical reconstruction of his knee this week, and although this injury can be career ending it is possible to return in 12-24 months. Good luck to Bhana with his surgery and subsequent recovery.

Reports came out late last week that Buhrer had suffered a foot fracture at training and would be out 6-8 weeks. There was no detail given on which bone in his foot he fractured (of which there are 26), but with a 6-8 week recovery timetable it is unlikely he required surgery.

Barnett had a fairly unique injury mechanism, as he was falling to the ground his foot was forced into end of range plantar-flexion (foot pointing to the floor). This can cause impingement (pinching) of structures in the ankle, or can also sprain the ligaments at the top of the ankle. It has not been reported as yet the specific source of Barnett’s injury, however he will require surgery and is looking at 6-8 weeks on the sidelines.

TPJ was initially thought to have only suffered a broken finger, however scans revealed damage to his flexor tendon that runs on the palm side of his finger. This is a much tougher injury to recover from, and has required surgery to repair. Depending on the severity of injury and where along the tendon this has occurred (mid tendon, or where the tendon attaches to the bone) TPJ will be looking at 8-12 weeks on the sideline. Scott Bolton suffered a similar injury in 2015 after cutting his flexor tendon whilst fishing, and with this being a simple repair he was able to return in 8 weeks (but with only 40% range of movement on return). 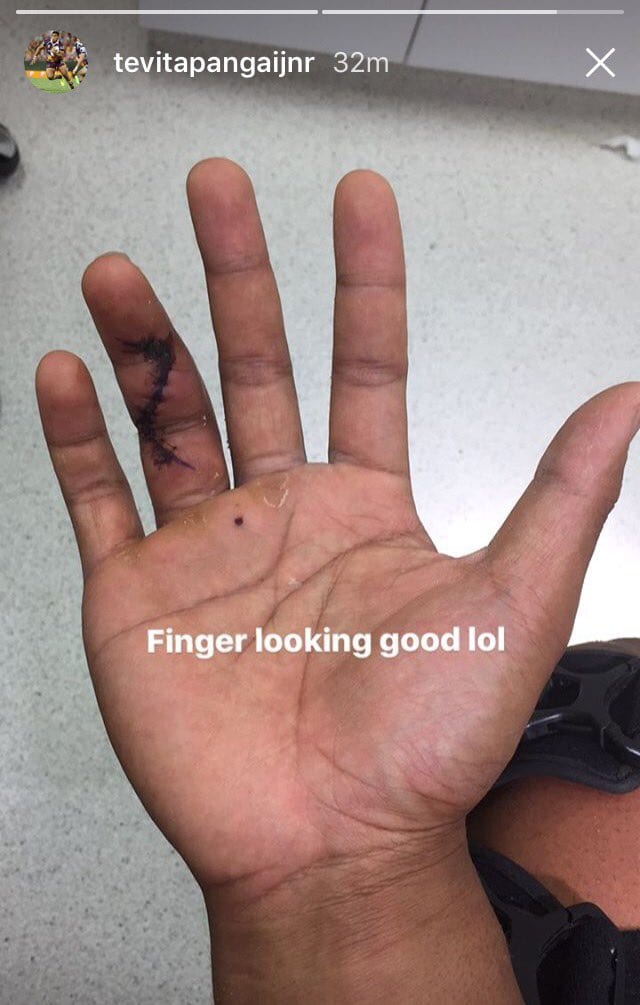 Matterson looked like he was "shot by a sniper" getting back into the defensive line 2 weeks ago. By video this was a high ankle ligament sprain which was later confirmed by reports from the club.  The degree of injury was less than initially expected and Matterson should only spend 4-6 weeks on the sidelines.

High ankle ligament sprain for Ryan Matterson, will be out 4-6 weeks for @sydneyroosters pic.twitter.com/wSjayxnSZj

Tim Grant suffered a nerve traction injury when James Graham’s hip drove into the soft tissue between Grant’s neck and shoulder. If the force is significant enough this can cause injury to the nerves (brachial plexus) that run into the armpit and all the way down the arm. It was initially confused with a wrist injury by some, as an injury to the brachial plexus can cause painful symptoms down into the arm and hand. When you hear of a player suffering a “burner” or “stinger” in their shoulder this is a mild form a brachial plexus injury which players often miss no time for. The more severe injuries to this area can cause tearing/rupturing, and this is a much more significant recovery process (think Simon Dwyer). Grant has been named for this week however, so hopefully his is a mild case.

Terepo suffered a "torn pec" when he collared James Tedesco late in the round 6 game. Like Buhrer and Barnett the club has not given much away, but with a reported 16 week recovery timetable it is likely he has ruptured his pec tendon and has required surgery to repair it. Pectoral muscle tears rarely require surgery or a recovery timeframe upwards of 4 months.

Minor soft tissue strains for Kahu (groin) and Reynolds (hip flexor) ruled them out of round 7. With both players required to explosively change direction and accelerate (and to a lesser extent goal kick for their sides as well) it was smart for them to sit out with strains to muscles used extensively during these actions. After being named for Rd 9 I expect them both to be fine for this week.

The opinions given by the author of this article are given by a qualified physiotherapist, HOWEVER they are based on the information available to the author at the time of publication; are general; and are not based on any formal physical assessment and/or diagnosis by the author. If you believe you may be suffering from an injury similar to one commented on by the author, do not rely on the author’s advice as it may not apply to you – see a qualified physiotherapist for a full assessment, diagnosis and treatment plan.