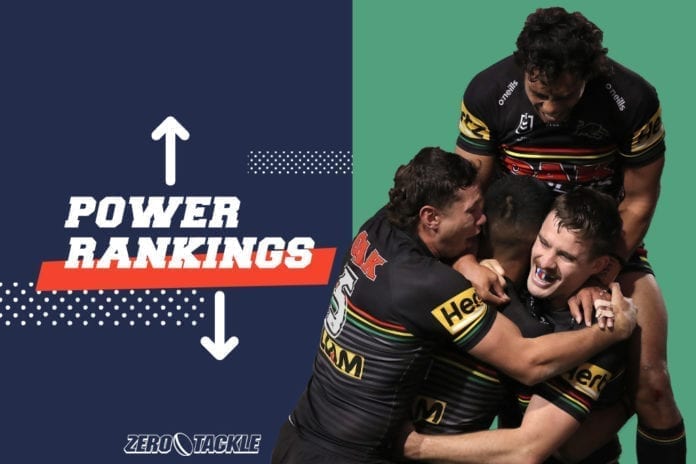 We have a new number one for the first time in weeks. They may not be top of the NRL table after ten rounds but for mine the Storm are the most dangerous side in the competition. They were able to back up their back to back wins over last year's Grand Finalists with a very complete performance against the Titans.

Seven tries to one, eight linebreaks to none and ultimately 42 points to six. Job well and truly done. Cam Smith was the man, again, but Munster sparked them big time upon his return. Nelson Asofa-Solomona was huuuge from the bench. The Storm are rolling.

For 45 minutes the Panthers looked as though they may have fluffed their opportunity to climb to the top of the ladder. A huge second half from Nathan Cleary in both attack and defence got them home to the tune of 22-10 against the Cowboys.

Their performance didn't match last week's incredible efforts but these are the games where title challenges are built. James Fisher-Harris continues to lead the way for his side. The Panthers won the middle against two genuine megastars and their halves eventually capisalised on that.

What a shock! The Eels looked absolute specials at Brookie against the under staffed Sea Eagles but left licking their wounds. A late comeback was close to enough but a win here would have been criminal. RCG is arguably the best middle man in the competition over the past month. 80 minutes, 297 metres and 120 post contact metres, he can be very happy with his shift.

Brown was very good again but the Eels are finally starting to show some cracks in that they miss their star halfback. Moses is due back this week so I don't expect to see this kind of performance again. Perhaps resting Ferguson wasn't a smart option unless he's carrying an injury.

Newcastle bounced back from their defeat last week with a two-point win over the Bunnies. Truthfully the Knights were cruising at 20-0 and should have iced this early. The result flattered Souths but the Knights had to fight to hold on late.

Bradman Best won his battle out wide while Andrew McCullough and Pearce controlled the middle. Ponga seemed to draw the attention on social media but Pearce was the man here. Good win, although it was closer than it should have been.

It's not often I type this, but the Roosters lost a game on Thursday night they really shouldn't have dropped. The 24-20 loss to the Raiders is hardly season defining but they were expected to do a number in the Grand Final rematch.

Brett Morris looked to have the Chooks right on track with a first half double, while Ikuvalu scored again as well as topping the metres for his side Ultimately, it was not to be. A huge defensive lapse late on allowed Papalii to stroll through untouched. 66% completion ... Very unlike the Roosters.

What a win! The Raiders won their first battle with the Roosters since the 2019 Grand Final thanks to a brilliant performance in their four point win. Josh Papalii scored an amazing try in the 65th minute to ice the game for the travelling and undermanned Raiders.

George Williams continues his incredible season while Josh Starling looked very much at home in his new colours. The Raiders kicked for almost 300 metres more than their opponents which showed the control of their halves.

Not even the biggest Tigers fan could have seen their Friday night performance coming, and what a performance it was. They ran rings around the hapless Broncos to the tune of 48-0, although it could have been 60. Harry Grant is absolutely incredible while Benji looked 28 again. Luciano Leilua was absolutely everywhere, Luke Garner scored a double in a huge performance while Billy Walters scored one of the best tries you'll see this year. Mbye slotted six conversions from 9 from everywhere on the park. Huge win!

The Sharks bounced back from their horror show last week with a huge win over the Warriors. Sione Katoa was the star, scoring a highlight reel try going the length. Ramien and Ronaldo were also huge out wide, crossing for tries, but it was the middle men who tee'd this up for the Sharks.

Hamlin-Uele scored yet another try, Toby Rudolf bossed the middle, Talakai was a wrecking ball and Aaron Woods put in a huge shift. Shaun Johnson is all class and scored his first try of the year. Will Kennedy looked good despite some errors while Josh Dugan's move back to the centres made the left defensive edge of the Sharks a completely different prospect to last week.

Souths dropped a close game to the Knights after a spirited second half comeback but truthfully were a distant second to the Knights. The 20-18 scoreline flatters the Bunnies despite the fact they could have won this game late on. Cook's late double largely pasted over a pretty dire game from the home team on the night. Hele was solid off the bench while Burgess and Murray ran for big metres but Souths have lost their intimidation in the middle.

The Red V were extremely lucky to bank the competition points against the Dogs in the Gong. Matt Dufty opened the scoring in the first set of the game before Aitken put them 10 up very early on. From there it was all Dogs until the final ten minutes. Dufty scored again in the 72nd minute before Corey Norman's late try iced the game. Paul Vaughan continues his dominant form while McInnes had made the number 13 jersey his own. Adam Clune looks every bit the first grader.

Wow, what a turn up! I fully admit I did not see this coming. An early ambush saw three tries to the home side before the Eels really got into their work. A 22-4 halftime scoreline was well deserved and they were never going to be headed from there. Martin Taupau was huge in the middle and lead the way sans his prop partner. DCE was all class after a poor effort last week. Proof that you can't keep a super talent down. Thompson and Sironen didn't run up huge numbers but both played their role extremely well.

Despite a spirited first half, the Titans were reduced to spectators for the majority of this game. No one expected them to beat the Storm but the difference in quality here was massive. They're just not getting enough our of their stars. Wallace and Arrow combined for 146 metres. Only one player ran for over 100 metres. Dire stats. Zero line breaks, only 16 tackle breaks, and truthfully not a whole lot more to offer.

The Cowboys, from 45-or-so minutes, looked on track to record the ultimate upset in a weekend of upsets. At 10-4 they were looking good but ultimately fell short against the Panthers. Hamiso Tabuai-Fidow scored a genuine highlight reel try, beating six or seven defenders en route to the line. Josh McGuire lead the way up front but they lost the middle battle in the second 40. Asi played well on debut and scored a handy try.

The Warriors had their moments against the Sharks but were ultimately spanked by the travelling Sharks. A late try to Wade Egan left something positive in an otherwise below par performance. A 63% completion rate makes it tough to win a game at any level. Conceding nine line breaks is also tough reading. Roger Tuivasa-Sheck is every bit the leader the Warriors need but just doesn't have the supporting cast.

The Dogs may be the first team to ever lose multiple games in a row yet move up the Power Rankings. But their efforts were far more impressive than the side below them. The Dogs looked to have this game won, leading by 12 entering the final 10 minutes, but lacked the class to bring home the points. Foran, despite supposedly clearing his HIA, didn't return and was sorely missed. Raymond Faitala-Mariner owned his side of the field while all of the Dogs run on forwards topped 100 metres. They fell just short despite a brilliant effort.

Yikes. Last week I rated the Sharks' "effort" against Penrith as one of the worst I've seen. The Sharks were huge compared to this performance by the Broncos. 48-0 could have been literally anything. All the talk is about the coaching future of Seibold but there are some real questions about the future of a host of players. Injuries have hampered the squad but right now Milford and the like wouldn't make any other side in the NRL.