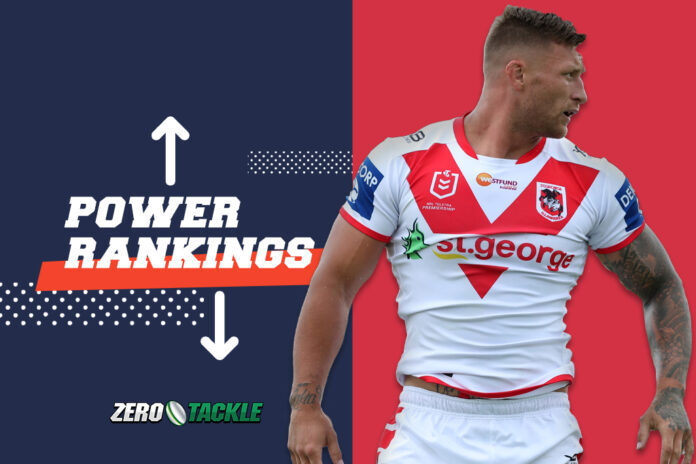 No Edwards, no worries. The Panthers kept their undefeated run going with a big win over the hopeless Sea Eagles at Brookvale. Cleary and Luai had the ball on a string and almost selected who they wanted to put over for tries.

Kikau was unstoppable, while To’o defied some awful looking cramps to score a double and terrorise Manly’s right flank. Matt Burton looks right at home in the centres. Charlie Staines looked world class in his two minutes at fullback. JFH and Moses Leota absolutely bossed this game. Bigger fish to fry for the red hot Panthers.

The Panthers race out to a 16-0 lead thanks to Viliame Kikau.

Four from four. Despite moments of worry, and some hilarious (not for him) mistakes by a certain winger, the Eels ultimately sit undefeated after a month of action.

Tom Opacic is looking right at home in this outfit. He bagged a double. Reed Mahoney may be the most improved player across the competition. Another huge performance. Isaiah Papali’i was a steal and has replaced Matterson extremely well.

Two late tries ultimately iced this but if we’re being honest the Eels were always too good.

The Roosters answered their critics with a resounding win over the in-form Warriors on Sunday evening.

Sam Walker slotted into the halves and looks set for a monster season. Brett Morris continues to score with absolute ease. He’s like $1.10 to finish top of the try-scoring ranks this year. James Tedesco continues to break sides apart. His abilities really make the Keary loss less substantial.

Angus Crichton made 206 metres which really lessened the HIA loss of Sitili Tupouniua. Great to see Victor Radley back.

The Bunnies were almost perfect on Good Friday. Cody Walker, despite his moment of ridiculous madness that will see him miss a week of action, was unstoppable. I’m feeling pretty good about my Dally M prediction in the pre-season.

Truthfully this was never a contest but they did keep the Dogs scoreless whilst running in six tries themselves. Jai Arrow has been a monster since his shift to the red and green. Adam Reynolds being off-contract is beyond belief.

The Raiders are sitting pretty after bouncing back from last week’s shock loss. The 20-4 win over the Titans answered a lot of questions last week may have posed.

Ryan Sutton is becoming a beast in the middle for the Green Machine. Charnze Nicoll-Klokstad had a gem of a game. The Raiders are rolling despite not reaching top gear yet. They probably got a little lucky avoiding a longer away trip but still banked two points on the road.

Three from four! The Red V are on fire right now! Tariq Sims had the game of his life against his former side, scoring a double and giving the Knights players nightmares.

Norman and Clune really stood up in Hunt’s absence. By no means were they incredible but they did the job and battered the Knights in front of a big Newcastle crowd.

16 errors is a worry but they defended well. Face a real test against the Eels on Sunday evening.

Ryan Papenhuyzen. That is all … The Storm rebounded from back-to-back losses by absolutely thumping the Broncos on the back of an 11-minute try-scoring blitz by their speedy fullback.

The Sharks continued their routine of beating the weaker sides with a massive 48-10 win over the Cowboys on Saturday evening. The eight-try-to-two win showed what this side is capable of even without Ramien, Johnson, Nikora and Katoa.

Chad Townsend landed eight from eight, from everywhere, in a brilliant return to kicking form. Matt Moylan crossed for his first try in two seasons. Conor Tracey is becoming a must select player for the club. Will Kennedy has been the Sharks best three out of four weeks and only missed the fourth due to concussion. Great win.

Can the last one out please turn the light off? The poor Knights are struggling to put a side together but will welcome back Ponga this weekend.

Pearce faces months on the sideline after a strange incident saw him tear a pec muscle. The Knights looked good in spots on Sunday but ran out of troops.

Poor Connor Watson had to play at least three positions. It was great to see Blake Green back on the field.

The Warriors were, again, brave on Sunday night yet pretty handily outplayed. At 16-12 down at half-time they were well in this but may as well not have run out for the second half.

Roger Tuivasa-Sheck is Iron Man. Tohu Harris is the captain in waiting and continues to deliver. They had slightly more possession and only a % less completion rate than the Roosters but just didn’t use the ball as well. Had no answer for Brett Morris and Tedesco.

The one that got away? A series of close calls yet missed opportunities cost the Titans victory. An injury to Jamal Fogarty in the 51st minute made this mission impossible.

Tino Fa’asuamaleaui was an absolute beast. He’s every bit the player the Titans hoped for when they signed him. David Fifita was very good again.

A 68% completion rate simply isn’t up to standard. Lots to work on as they look to bounce back right away.

For a short time, the Broncos looked set to build on last week’s commanding win by pushing the Storm. Then it happened. Four tries in 11 minutes. The Broncos were cut to absolute pieces by the speedy Storm outside backs.

Walters’ inability to stick by a halfback despite his million dollar five-eighth offering little astounds me. Xavier Coates can tell his grandkids he outran Josh Addo-Carr. That’s about where the highlights ended on Friday.

The Tigers had their moments on Easter Monday but never really looked in the contest. At 20-0 this game was over, red rover, but to their credit they forced a contest as such.

Coincidentally (or perhaps not) their four standouts this season all crossed for tries. Adam Doueihi is leading the way in the halves, Daine Laurie is having a breakout season, Jacob Liddle has settled in very well, while Stefano Utoikamanu looks a great find. Need to beat the Cowboys this weekend.

Oh my. If this isn’t rock bottom, I’d hate to see what is. The Cowboys were spectators on Saturday evening as the Sharks ran riot.

Valentine Holmes scored a late try but otherwise looked at sea against his former club. Hamiso Tabuai-Fidow’s long-range effort came against the run of play but ultimately stopped a first half shut out.

To their credit they only lost the second half 12-6 but that’s clutching at straws when you’re 30 points behind at the break.

Yuck. The Sea Eagles not only welcomed the Panthers to Brookvale Oval on Thursday night but they walked them down a red carpet and set them up with VIP service for an easy night of fun.

Absolutely horrible from the home side who can expect half the faithful if these performances continue. Josh Aloiai is, by far, the best forward Manly have. The fact he’s not starting says it all. Dylan Walker has been named at the No.1 this weekend despite offering nothing across the opening month.

Dogs fans, stick by your side. They’ll come good. Just not this weekend against the Storm. I’m genuinely worried they won’t trouble the scorers again this weekend.