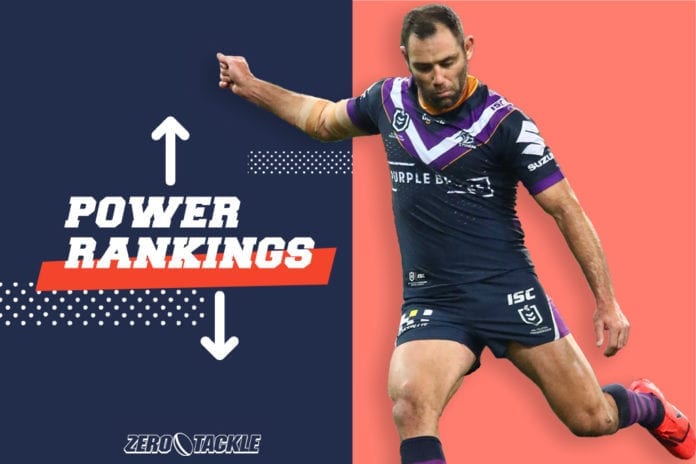 The Panthers are 2-0 and despite struggling at times to put away the Dragons, retain top spot based on beating the back to back premiers last year. This was a five-try all affair, however, Nathan Cleary’s perfect 6/6 from the tee proved to be the difference. It’s only round two but Api Koroisau is shaping up as the buy of the year. Kikau, for the second week in a row, defied injury to cross the line. Back to back tries in the 68th and 70th minute put them ahead after they blew an early lead, and they were able to hold on. Tough game to summarise but a pretty encouraging win all things considered. Josh Mansour looked like a weapon.

This will hardly go down in history as one of the code’s most entertaining games, but this was Storm 101, especially against the Sharks. A late penalty goal saw them beat their old enemy and sit 2 from 2. This was a frustrating games to watch at times but Melbourne did everything right. They scored a rough and tumble try, they defended their line incredibly well and they frustrated their opponents into beating themselves. Tui Kamikamica has started the season very well, outshining some huge names. Cam Smith was Cam Smith, good and bad. He just knows how to win.

The Knights recorded a comfortable win in an enjoyable game despite conceding four tries. Two of those were absolute gifts to their hosts but overall they were convincing in recording their second win from two games. Tuala scored a double, Edrick Lee had a field day in the air, Pearce was solid and Ponga was in everything. This was an entertaining game thanks to the brand of footy the Knights played. Watson and Mann both scored tries while Jayden Brailey had a very good game. He mirrored his brother’s kick from dummy half in a play that looked like it has come from the Brailey backyard.

Despite a very tricky schedule to start the season, the Broncos are a perfect 2 from 2 and are looking very good. A Kotoni Staggs hatty propelled the Broncos into a win over their rivals and allowed McGuire bragging rights. That Anthony Milford try was something special and would have been a magical highlight in front of a capacity crowd. The Broncos young forwards again did the job, this time with Patrick Carrigan the star. I know it came through negative means but I’m loving Isaako in the fullback role. A Brodie Croft injury took some shine off the win but otherwise, it was a job well done for the Broncos.

The Raiders have now had two very convincing wins, conceding a total of 10 points across the opening fortnight. They should be higher here on the list if not for the standard of opposition. They’ve done everything they can to this point, with another four-try effort. Charnze Nicoll-Klokstad ran riot yet again with a huge 235-metre effort. Nick Cotric is a machine out wide and should be there come Origin selection time. Papalii was again hard to contain, while the Raiders bench provided huge impact. George Williams has settled into the NRL very quickly and looks the goods. Good win. More difficult challenges are to come.

The Eels are now 2 from 2 despite not really hitting their straps. The 46-6 scoreline looks incredible, and it is, but they’ll need to be more polished against better opposition. That said, that first Mitch Moses try was a thing to behold. With or without fans it’s great fun seeing the whippet number 7 go almost the length. Seven tries to one secured a very dominant win. Junior Paulo lead the way while Nathan Brown looked like Brad Clyde. Reed Mahoney’s injury was the only negative to come out of an otherwise pretty handy Sunday evening. Moses landed 9 from 9 with the boot.

The Cowboys are on the board after a solid 24-16 win over the Dogs in a fly-in/fly-out Thursday night. Despite incredible performances from Scott Drinkwater and Coen Hess, this was the Jason Taumalolo show. He ran for 345 metres, made a line break and scored an amazing try that went around the world. The first half dominance displayed by the Cowboys number 13 was all time. Scott Drinkwater continues to shine and justify Paul Green’s decision to name him in the halves. Coen Hess looks like he’s on his way back to his best. A late try by the Dogs made this game look closer than it was.

The Tigers sit 1 and 1 after losing probably the most entertaining game of the round. They were the only side to enjoy home ground “advantage” having a small yet very vocal crowd present from surrounding houses. The Tigers gave up too much possession and were lucky to be in this game at halftime. A lucky intercept try to David Nofoaluma and a try to Corey Thompson right on half time made this a contest at half time. Josh Reynolds had a mixed game, scoring and conceding a penalty try. Joey Leilua had an absolute shocker and looked more interested in wrestling than playing the game.

Manly recorded their first win of the season via a Daly Cherry-Evans field goal. They now sit 1 and 1 after the toughest possible start to the season. AFB lead the way in the middle but it was the Sea Eagles big two who got them home. The DCE field goal just continued his run as the game’s (non-Origin) best clutch finisher. No one can kick a field goal for their club side like the Manly number seven. Tommy Turbo literally spilt blood for his team and saved a series of tries. The last-ditch effort to knock the ball out of Keary’s hand is the most underrated play of the season thus far. His never give up attitude makes him one of the game’s elite. An incredible game this despite the lack of fans and tries.

The Bunnies now sit at 1 and 1 after a failed trip to the Queensland capital. Despite a ridiculously slow start, the Bunnies lead this game at half time despite not really deserving to. A late Alex Johnson try and an off night from the tee from the Broncos made this game a close finish but this was four tries to three and the Bunnies big stars failed to fire. Latrell Mitchell’s stint at fullback has started slowly and his best moments here came when moved to centre. Hardly alarm bells but they’re one mistimed pass from being 0-2 with their prized recruit struggling to get involved.

The Sharks sit 0 from 2 yet should be undefeated. They’ve beaten themselves two weeks in a row in frustrating fashion. 66% completion rate and another lost penalty count sums up the NRL’s dumbest side. They looked on track to win a horror game that deserved to be played in front of nobody after a moment of brilliance from Blayke Brailey, but a series of errors and penalty handed the Storm a try and the go-ahead penalty goal. I don’t like to single out players but Jack Williams will be very lucky to retain his spot after a horror opening fortnight. The Sharks need more from their halves. Josh Morris exits the club. Will Kennedy looked at home in the top grade.

After two rounds the Roosters sit with a total of zero wins. I wonder what type of money was on offer for that following their dominant World Club Challenge win? The tri-colours are really starting to notice the loss of Cooper Cronk. Obviously it’s near impossible to replace one of the best two halfbacks in the past decade, but it’s really hitting home. The Roosters ran for 300 metres more than the Sea Eagles and recorded five line-breaks to one, yet couldn’t get the win. Luke Keary will be running extra laps at training after bombing a try that has to be seen to be believed. Tedesco was huge but it’s time for Boyd Cordner to return.

The Dragons, despite two close finishes, now sit at 0-2 after the following fortnight. Two close finishes, two losses. Unfortunately, with the game there to be won, the Dragons highly hyped and highly paid halves failed to stand up and deliver. Matt Dufty looked like a man possessed upon his return. He scored two tries and scorched the turf on many occasions. Tyrell Fuimaono topped the metres with 177. Considering the names in that forward pack, that’s quite an achievement. The Dragons missed less tackles than the Panthers, but the tackles they missed were far more harmful. Six linebreaks conceded. The knives are sharpening.

Another typical Bulldogs performance sums up their round two loss to the Cowboys. They were brave, at times brilliant, but a distant second best. Copy and paste from last week and next week and so on. An early Lachlan Lewis try had many thinking that this could be a big night for the blue and whites. unfortunately, they had no way of containing the rampant Jason Taumalolo. Dallin Watene-Zelezniak had a mixed night, making some horror mistakes but producing some incredible moments and topping the metres made. Lachlan Lewis being hooked is a very worrying sight.

The Titans looked in this contest for much longer than they deserved. A Dale Copley try in the 14th minute made this a 12-6 but after half time this was all one-way traffic. Yes, again, the Titans were bitten by the injury bug, but there are just too many players here who aren’t up to standard. 33% possession exhausted their defence but it was of their own doing. A horror 58% completion rate made it impossible to do anything other than stand under the posts as the Eels converted.

The Warriors deserve all sorts of recognition and credit given the circumstances surrounding their season, but on-field this side is a side without much going for it. They finally scored their first point this season via a penalty try. Yes, they were denied the right to score and the decision was 100% spot on, but still. They failed to record a line break for the second straight week. RTS was huge (again) and Tohu Harris was his usual self, but it was young Eliesa Katoa and Taunoa-Brown who continued to impress. The less said about Adam Blair the better.

NRL super coach Wayne Bennett could be stood down after COVID...