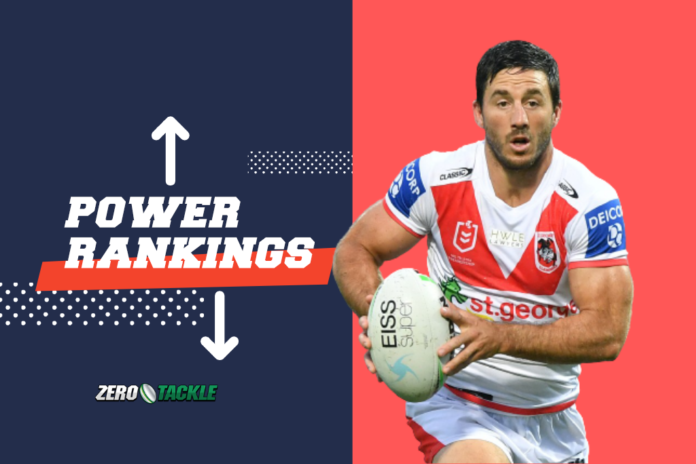 Awesome! Incredible! Amazing! Ridiculously Good! However you want to describe it, the Storm were UNSTOPPABLE against a hopeless Tigers outfit on Saturday evening.

The 66-16 shellacking was a joy to watch, unless you were a Tiger fan, and came on the back of EVERYONE. Standouts included Hughes, Smith, Munster, Finucane, NAS, Grant, Hynes ... and the rest.

At 40-0 at halftime you could have forgiven the Storm for taking their foot off the accelerator but it wasn't to be. They ran riot again in the second half although did look disappointed to concede some late tries.

Despite a slow opening 14 minutes where they trailed 12-0, this was a brilliant performance by the Penny Panthers. Again it was the Cleary, To'o and James Fisher-Harris show.

Matt Burton continues to absolutely dominate out wide. He's arguably a top five centre in the game despite being asked to fill a role.

This was a win they needed coming off two losses for the first time in a long, long time and now has them well and truly back on track for a post Origin-period assault on the Minor Premiership.

It's going to sound strange considering the Bunnies won 46-0 but they didn't really even play that well. The eight try mauling was a training run in second gear, which is frightening for the other top-four hopefuls.

Cody Walker is so unlucky not to be in the Origin arena. He was incredible here yet again. Campbell Graham scored a double and looked great following his Origin-camp call up.

Jai Arrow was so good he has earned himself an Origin promotion while Keaon Koloamatangi continues to put himself in bright lights. Brilliant win without hitting top gear.

The Eels were pushed for 40 minutes but ultimately ran riot on Sunday afternoon in a big win over the Bulldogs.

Clint Gutherson was again the star, although he had plenty of assistance. Moses was again good while Brown, RCG, Lane and Isaiah Papali'i were all huge in the middle for the Eels.

Sean Russell crossed for two tries on debut. Mitch Moses landed 6 from 6 on a brilliant afternoon for the red hot Eels.

For the opening 40 minutes Manly looked as though they had travelled to the Gold Coast for a holiday but whatever Des Hasler said at halftime produced magical results.

After some research it turns out he said "get Turbo involved". Tommy Trbojevic produced THE best half of footy all season by an individual and destroyed the hapless Titans.

The Sharks recorded their fourth straight win after a two-point win in Townsville. Shaun Johnson recorded his third man of the match performance despite, again, only playing for 50 minutes of the 80.

Will Kennedy was also very, very good. Siosifa Talakai was an absolute giant in attack, however missed two awful tackles which lead to tries.

Aaron Woods put himself in the shop window with a big effort that included a try. Surely he'll be offered a contract soon. The Sharks are motoring in terms of results but are yet to put more than 50 minutes together.

14 minutes into this contest and the Roosters were well on their way to victory despite being without an absolute host of stars. Unfortunately from there it was all down hill.

Angus Crichton was brilliant and earned his way back into the Origin set up with class. James Tedesco was, of course, in absolutely everything.

Joseph Manu looked ok in the halves but looks as though he's struggling with being forced into a different position each week.

The Cowboys were six or seven metres off Golden Point. Valentine Holmes had one of his best games of the season against his old side and probably deserved for that 40+ metre field goal effort to go over.

Kyle Feldt scored two ridiculous tries in as many minutes which completely opened this game up. Tom Dearden is looking good at his new side.

Largely the Cowboys were outplayed but a brilliant last 10 minutes, started by a Val Holmes highlight reel play, almost saw them home.

The Dragons got home in the 'Gong on the back of a veteran and a debutant. Ben Hunt demanded Origin selection with a near flawless performance.

Tyrell Sloan added some creativity and consistency that the Dragons badly lacked. No one is going to soon forget the scenes of his brilliant try and the camera pan to his "Ma" on the hill.

Again the Titans avoid a drop due only to the results of those around them. The Titans were diabolically bad in the second half of their 56-24 loss. They in no way belong in the top 10 here if not for pure luck.

They started Sunday's game brilliantly, scoring five tries to one in the first half. Everything they tried came off but unfortunately once the kick was covered, they had nothing.

Reduced to literal spectators in the second half they not only didn't score a single point but conceded. That's disgusting and undid all the good work they produced early.

Newcastle are back in the winner's circle on the back of a 10-6 win in horror conditions. Brodie Jones crossed in the 75th minute to cap off a length of the field set.

Daniel Saifiti went into beast mode for this contest and was, by far, the most damaging player on the field. Lachlan Fitzgibbon was good too, despite a few errors.

Jake Clifford's boot is one of the best in the business and caused one of the game's best young players untold nightmares. What a weapon.

The Warriors were a skewed field-goal attempt away from likely victory in the Newcastle rain. It was a shame Reece Walsh missed the kick as he was brilliant otherwise.

Euan Aitken had arguably his best game in Warriors colours running for 185+ metres and scoring a brilliant try, his side's only try.

Only two forwards ran for over 100 metres, with 117 by Tohu Harris being his side's most from their engine room. Makes it tough for their halves.

Another week, another Canberra fade out. You can almost set your watch to the inevitable Canberra fall away. At 20-6 this should have been over.

Corey Harawira-Naera continues his great run in the lime green while Bailey Simonsson looks at home in the number one jersey. Sebastian Kris has limitless potential.

The Tigers suffer one of the biggest, mid-season drops in the rankings history. Lucky the Dogs and Broncos exist otherwise they would have gone further.

Every single member of the 17 from Saturday night should dedicate their undeserved match payments to those poor fans who travelled to watch this filth.

It would be unfair to say anything positive about this 'effort'. That first half is the literal worst half I've ever seen.

At half time the Dogs were not only in this contest but were shading their western Sydney rivals to the tune of 10. Unfortunately halftime happened and then it was all over for the Doggies.

A horror moment leading to a Mitch Moses penalty try started the rout. On the positives Dylan Napa had his best game in years and Tuipulotu Katoa scored an awesome try.

The Broncos will finish last. They may not win another game in 2021. No side running out halves of Tyson Gamble and Karmichael Hunt can be expected to win footy games in 2021.

Tesi Niu, Payne Haas and Matt Lodge aside, this was a horror show in front of an increasingly impatient crowd. Those three aforementioned were pretty good.

That Xavier Coates cover tackle was incredible and needs to be replayed throughout training.

Panthers
ROUND 19 STATS
11
All Run Metres
61
Tackles Made