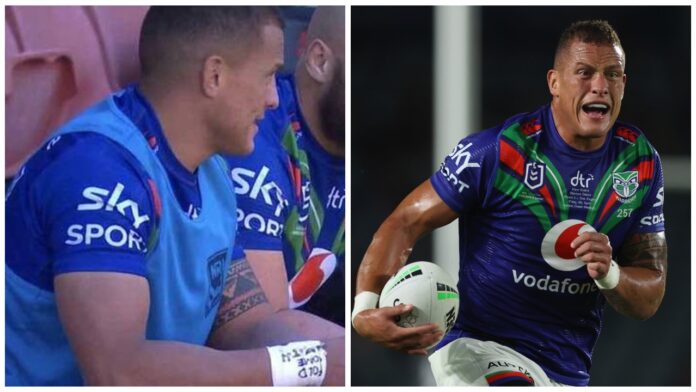 The NRL could be prepared to hand New Zealand Warriors forward Kane Evans a sanction for the expletive-filled message on his wrist tape, according to The Sydney Morning Herald.

The Fox broadcasters of the match between the Warriors and Panthers on Sunday caught vision of Evans - who was 18th man for New Zealand - on the bench with the words “fold some c---” written on his wrist.

The footage was soon scattered across social media, with some fans and followers expressing their discontent with Evans' decision to have the message on his wrist.

🤦 Kane Evans could be in hot water after the cameras picked up profanity written on his wrist.@GibsMoore was pretty unhappy on Grandstand Rugby League:

"If Evans is that much of an imbecile, he should be suspended before he takes the field."

The league will now look to decide whether to penalise the 29-year-old or not, with a fine or even suspension a possible outcome of the NRL's Monday review.

Evans' teammate Matt Lodge was suspended for two matches seven years ago for writing an obscenity on his wrist while representing NSW in an Under 20's match.

A spell on the sidelines would add further headaches to Nathan Brown's selection planning for the upcoming rounds, with Roger Tuivasa-Sheck (concussion), Tohu Harris (ACL), Wayde Egan (shoulder) and Rocco Berry (hamstring) all collecting injuries in the 30-16 defeat.

The Warriors are currently placed 12th on the ladder and are just two points outside the top-eight, with a tough clash against the Rabbitohs scheduled for Round 19.