Melbourne Storm great Cameron Smith announced his retirement this week after 433 NRL games and a trophy case full of awards, honours and memories.

The 37-year-old hangs up the boots as one of the competition's greatest ever players while also leaving the league as one of the most loathed by rivals.

A history of headlines have previously placed the Queensland great in hot water, and while he will be remembered as a legend of the game, there are many who believe it will be his demeanour that remains on the surface.

Fox Sports journalist James Hooper labelled the former Storm hooker as "the greatest serial winner" the NRL has ever produced in a scathing article on Wednesday. 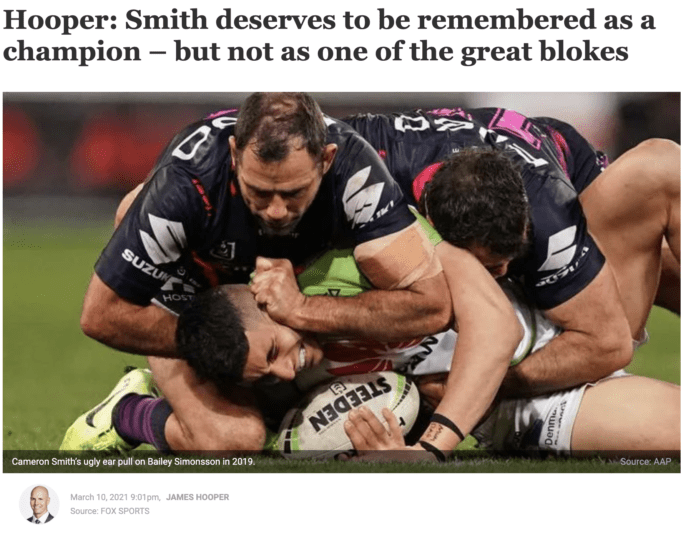 The piece, titled "Smith deserves to be remembered as a champion – but not as one of the great blokes", received further polarising opinions from fans, while Melbourne teammate Christian Welch slammed the Fox reporter.

"Out of all the deserving journo’s for limited sports jobs in Aus we’ve got this bloke leeching away." Welch wrote. "You should be embarrassed."

Out of all the deserving journo’s for limited sports jobs in Aus we’ve got this bloke leeching away. @FOXNRL you should be embarrassed

Hooper's comments went as far to say Smith "bordered on sociopathic" during showcase moments of his career, namely his notorious suspension on Sam Thaiday that ruled the Melbourne captain out of the 2008 Grand Final.

The piece also listed past incidents involving Raiders pair Jarrod Croker and Bailey Simonsson as well as his history of indiscretions with league referees.

"There is no doubt Smith’s penchant for lecturing referees to the point of standing over match officials polarised fans," Hooper wrote.

"Was he a protected species because of his lofty standing in the game? One hundred per cent.

"It’s a shame he won’t also be championed as one of the all-round great blokes."

As well as questioning Smith's role in the Storm's salary cap saga and labelling his recently published memoirs as "drivel", it's fair to say Hooper didn't hold back.

There will be a minority that agree with his comments, but having published his distaste for Smith in the same day of his retirement also looks to have missed the mark.

Salary cap cheating, he had 3 contracts & refused to accept any responsibility. His behaviour while Alex McKinnon lay prone on the ground with a broken neck. Numerous cheap shots. His actions & his actions alone.

"His allies and acolytes claim Smith is a misunderstood, laid-back champion Queenslander who longs for the quiet life away from the cameras with his family," Hooper continued.

"His enemies counter he is a cold, calculated, closed book who can be arrogant and aloof.

"Wherever you stand, one thing for certain; Smith is probably the greatest serial winner rugby league has ever produced."