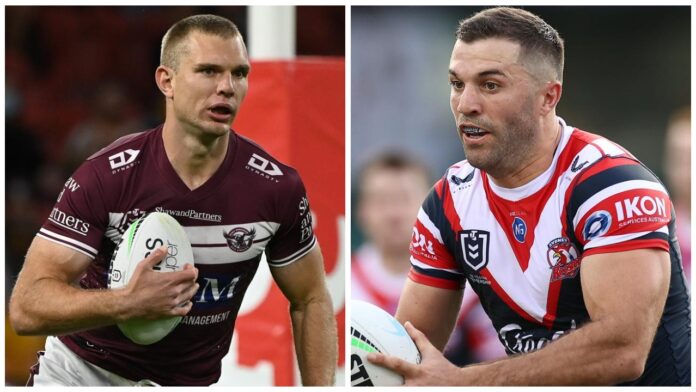 Although a vast majority of arguments that are undertaken by sporting fans are often wildly subjective, those that believe that Manly's Tom Trobojevic is the best fullback currently plying his trade were given a boost on Friday night.

Squaring off against the Roosters', New South Wales' and Australia's incumbent number one in James Tedesco, 'Turbo' once again put on the jets as his Sea Eagles cruised to a 42-6 victory to keep their premiership hopes alive.

With many viewing the battle between the star backs as a contest within the all-Sydney semi-final contest, those that had their money in the maroon corner ahead of the bout were lining up for collection well before the full-time whistle.

Across the total rout, Trbojevic ran for a team high 201-metres and made 10 tackle busts, whilst also collecting a game high three linebreaks and a brace of tries in just 65-minutes of action.

Although defeated both on the paddock and in the metaphorical square circle, Tedesco's night in Mackay could still see him hold his head high after the Chooks' season came to a careering halt.

Despite failing to cross the chalk, the Sydney skipper still managed to end the defeat with 132-metres, four tackle busts and a try assist.

However, an uncharacteristic forward pass by Tedesco during the second-half of the stoush acted as the microcosmic difference between both the pair and their sides.

With both speedsters still shy of their 30th birthday, there are plenty more chapters to play out across this blossoming rivalry, but given his side will advance to take on the Rabbitohs in next weekend's preliminary final, the belt still sits snugly around Trbojevic's waist.

Irrespective of their week off to freshen up for the penultimate clash, Souths will still be wary of what the Mona Vale flyer can offer. However, due to the 24-year-old's injury history, the Redfern side haven't been afforded a chance to witness 'Turbo' up close since Round 2 of the 2019 season.

Still, with Trbojevic having constructed a 2021 highlight reel as long as a wet week, Wayne Bennett's boys will have no shortage of fodder for their attempts to replicate the Storm's deeds of shutting Tommy's engines off.

Manly and South Sydney will do battle for the right to earn the first pass to this season's Grand Final at 7:50pm next Friday night.