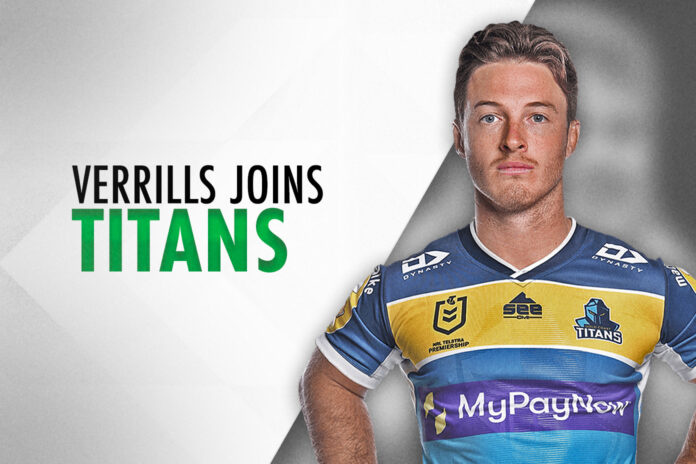 The Gold Coast Titans have secured the services of premiership-winning hooker Sam Verrills on a two-year deal, adding some much needed class to their spine for the 2023 season.

Debuting in 2019, Verrills went on to score the opening try of the NRL Grand Final, ending the night with his maiden premiership ring, and a big future on the horizon with the Sydney Roosters.

However, the signature of Brandon Smith signalled the end of Verrills' career in Bondi, handing the Titans the opportunity to swoop in and sign the 23-year-old hooker from the beginning of next season.

Having lost Aaron Booth for the majority of 2023 and Erin Clark transitioning into a lock forward, Verrills joins Kieran Foran as key spinal acquisitions, joining the likes of Jayden Campbell, Toby Sexton and AJ Brimson at the club.

Titans head coach Justin Holbrook was ecstatic with the signing, and is eager to see the danger Sam can deliver out of dummy-half.

“Sam has great vision and is a real threat from that hooker position," Holbrook told the Titans media team.

“He’s learnt his craft under Origin hooker Jake Friend and has been able to really shine in that number nine jersey for the Roosters in recent seasons.

“We’ve got great experience joining our spine next year with the arrival of Kieran Foran and our key positions will be further bolstered with Sam’s arrival."

Undoubtedly excited to make the move north and establish himself as an elite starting hooker, Verrills only has eyes on finishing his time at the Roosters on a high note.

“The Sydney Roosters has been such a big part of my life, and I’ll always be grateful to Robbo, the players and all the staff at the Club for everything they have done for me, and for the memories and lifelong friendships I’ve made along the way,” Verrills said on Wednesday.

“While it’s good to have my future sorted, my only focus right now is on continuing to work hard and play my role for the Roosters for the rest of the season."

Verrills will start at hooker for the Chooks against the Cowboys on Saturday afternoon as his career with the tricolours slowly draws to a close.