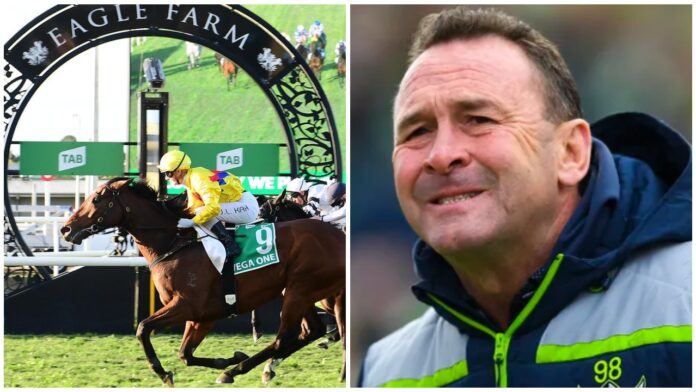 Following a day that saw six-clubs told that their Saturday clashes had been postponed due to Covid protocols, Canberra coach Ricky Stuart was incandescent as to why the racing industry was not similarly forced to scrap their weekend meets in the sunshine state.

The Raiders were set to face the Knights on Saturday, however, they were asked by the league to alter their plans and instead face the Novacastrians on Sunday instead.

Although acting flexibly due to the everchanging pandemic landscape is a necessity, Stuart was still left seething as his side was put on ice for the afternoon, yet the races at Brisbane's Eagle Farm racetrack were permitted to go ahead unaffected.

“I’m bewildered we haven’t played this weekend,” Stuart was quoted by The Sydney Morning Herald.

“These Saturday games have been postponed, yet I’m here watching the Brisbane races all day right now. I don’t get it.”

The 54-year-old's mood was hardly likely to have been improved after his side's three-game winning streak came to a halt at the hands of the Knights on Sunday afternoon.

Adam O'Brien's side had the better of the play for most of the afternoon and ended the contest as 34-24 victors in front of a crowd-less Suncorp Stadium.

The win sees the Knights leapfrog 'The Green Machine' into eight after starting the Round in 10th position.

The Dragons and Rabbitohs clash that will take place on Sunday night at the same venue was originally scheduled to take place in Rockhampton - the first time the regional city would have had the honour of hosting an in-season NRL match.

But following the Palaszczuk led government's decision to lockdown portions of the state earlier this weekend, the contest was moved to the state's capital.

Having spent almost the entirety of yesterday either in the air or waiting on the tarmac, South Sydney coach Wayne Bennett felt aggrieved about the fact that the historic clash had been cancelled, despite the fact that Rockhampton was not a Covid affected area.

The mastermind stated that his, and every other club, had adhered to all of the advice, procedures and protocols.

“The tragedy about Rockhampton is it’s not in a red zone – it’s not a COVID hotspot area,” Bennett said.

“We have never been so prepared for COVID like we are today. We weren’t prepared like this last year and we still got through the season.

“We’ve been tested on numerous occasions, we’re COVID free. We’ve been living in bubbles until two days ago, but we’re still in a bubble and complying.

“When we went up there today, we knew we weren’t to mix with crowds, which was all part of [the agreement]. You have to ask the Queensland government why they did what they did. I don’t understand why it’s come to this.”

Bennett's counterpart for the cancelled clash, Anthony Griffin, echoed his Round 20 rival's sentiments and explained that he was upset for the residents of his birthplace who were set to turn up for yesterday's fixture in droves.

“I just feel for the people up there; it was the first time they were going to host an NRL game and to have it called off just a few hours beforehand, it’s devastating for them,” Griffin said.

“Hopefully us or another club gets up there the next few weeks and plays a game.

“They sold 5000 tickets in 20 minutes when they went on sale at the start of the week. They travel from Emerald, Blackwater, all those country towns – it’s a rich, blue-collar rugby league area.”

Bennett's Bunnies and Griffin's Dragons are set to do battle at Suncorp Stadium at 6:05pm AEST.