The Parramatta Eels' upset over the Melbourne Storm, and the North Queensland Cowboys' surprise performance over the Brisbane Broncos have seen their players dominate Zero Tackle's stats-based team of the week for Round 3.

The Manly Sea Eagles, Cronulla Sharks, Brisbane Broncos, Canberra Raiders, Melbourne Storm and New Zealand Warriors are the other teams with one player making the cut this week, which means six teams miss out altogether.

Zero Tackle's Round 3 team of the week

1. Clinton Gutherson (Eels)
Gutherson was one of the big names to stand up for the Eels during their clash with the Storm, running for 166 metres from just 14 carries of the football and making a pair of line breaks, to go with five tackle busts.

Solid in defence as well, it was arguably Gutherson's best performance of the season so far in a big clash as his side looked to return from a shocking loss to the Sharks seven days earlier.

2. Taylan May (Panthers)
May's career might still be in its infacy, but his hat-trick against the Knights - who lost their first game of the year on Saturday afternoon in Bathurst - proves he belongs at this level.

On top of his three tries, May had 162 metres to his name by the end of the afternoon to go with a line break and a try assist.

3. Izack Tago (Panthers)
Tago is fast becoming a regular in the team of the week on the back of an excellent start to the season - his first full year in first-grade as he takes over from departed stars.

Rising to the occasion yet again, Tago made 117 metres, a line break, two try assists and had a pair of four-pointers of his own in a superb performance. 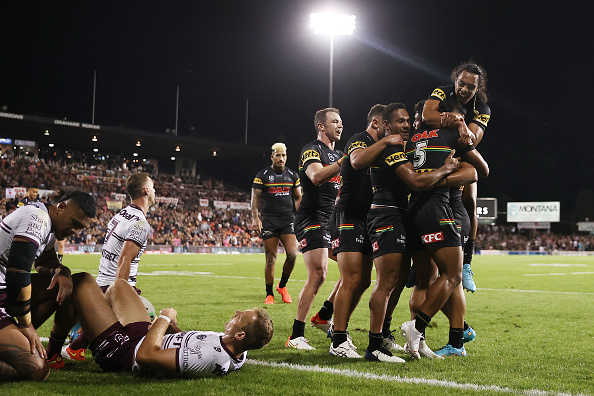 4. Valentine Holmes (Cowboys)
There were plenty of questions ahead of 2022 surrounding Holmes and his ability to play in the centres, but he had a strong performance in the Cowboys' 38-12 win over the Broncos on Sunday afternoon.

He topped all running metres with 200, scored a try, kicked seven from seven goals and had two line breaks to go with nine tackle busts.

5. Reuben Garrick (Sea Eagles)
On a wet and windy night at Brookvale, Garrick was one of the Sea Eagles' best in a low-scoring encounter against the Bulldogs. Effective with the ball in hand, Garrick made three line breaks in his 11 runs to put his team on the front foot time and time again.

6. Dylan Brown (Eels)
Dylan Brown is a player who came into the 2022 NRL season under what could only be described as enormous pressure. He had a poor 2021 at the best of times, but put on a show against the Storm,

Brown finished the game with two try assists, a line break, 126 metres and also made a staggering 36 tackles - the fourth-highest of any Eel despite his position in the halves.

7. Nicho Hynes (Sharks)
Hynes has wasted no time in knocking the doubters early this season, carrying his fullback form at the Storm into the halves for the Sharks as he shredded the Dragons on Thursday evening.

Barely putting a foot wrong all night in terrible conditions for football, Hynes scored a try, made over 100 metres and assisted another try as the Sharks thumped the Red V in the derby. 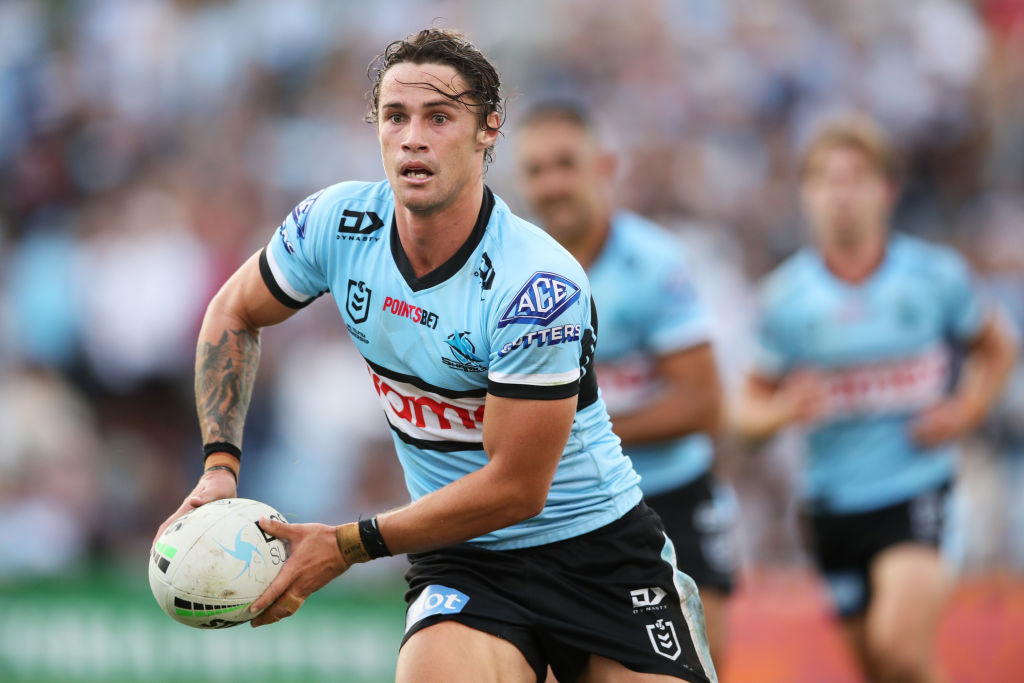 8. Junior Paulo (Eels)
Paulo and his front row partner Reagan Campbell-Gillard were superb, but Paulo just edges him out for the spot. The New South Wales Blues State of Origin star ran for 192 metres and had a pair of tackle busts while also coming up with 29 tackles in what was an excellent performance.

9. Damien Cook (Rabbitohs)
Cook was one of the stars for South Sydney on Friday night, putting in a masterful display against the Rabbitohs to laugh off the thought that he may not be the New South Wales hooker come State of Origin time.

10. Payne Haas (Broncos)
Haas just goes from strength to strength. Even in a losing team on Sunday, his big minute performance still brought in excess of 150 metres was superb.

Unfortunately, he seemed to be reduced to the one-man band he was for much of 2021.

11. Jeremiah Nanai (Cowboys)
Nanai is fast developing into an excellent NRL player. The star second rower, who is only 19 years of age, scored a hat-trick for the Cowboys playing on the right edge against Brisbane.

He made well over 100 metres and was one of the best on ground.

12. Isaiah Papali'i (Eels)
Papali'i was immense for the men in blue and gold at both ends of the park, making 43 tackles to lead all Parramatta players, while also coming up with 158 metres.

65 of those were post-contact yards in a performance we have become all too used to for the barnstorming edge forward.

13. Cameron Murray (Rabbitohs)
Cameron Murray might have just been about the player of the week as he inspired the Rabbitohs to their first win of the season.

Scoring the opening try, he then assisted the second before going on to make 152 metres, two line breaks, two try assists and three tackle busts in a 77-minute effort. Interchange
14. Reuben Cotter (Cowboys)
Cotter's return from injury off the interchange bench saw him play plenty of extra minutes in the absence of Coen Hess, who was taken out of the game with an early injury.

It hardly stopped Cotter from putting in an excellent performance though, doing plenty of hard yards in the middle as he ended up with 164 metres to his name.

15. Tom Starling (Raiders)
A shock demotion back to the bench, Starling didn't let the size of the challenge overawe him once he made it onto the park, playing for 55 minutes in the eventual comeback victory. He made 91 metres from eight carries of the football and tackled with remarkable efficiency.

16. Jazz Tevaga (Warriors)
Tevaga might have only played half an hour against the Tigers, but it's the same old story every week for the consistent middle forward and back up hooker. He was heavily involved during his time on the park, making 86 metres and tackling strongly.

17. Griffin Neame (Cowboys)
Neame, like Cotter, had to stand up and carry some of the extra workload left on the park by Hess' injury, but he did it superbly, running for 134 metres and scoring a try in an excellent performance.