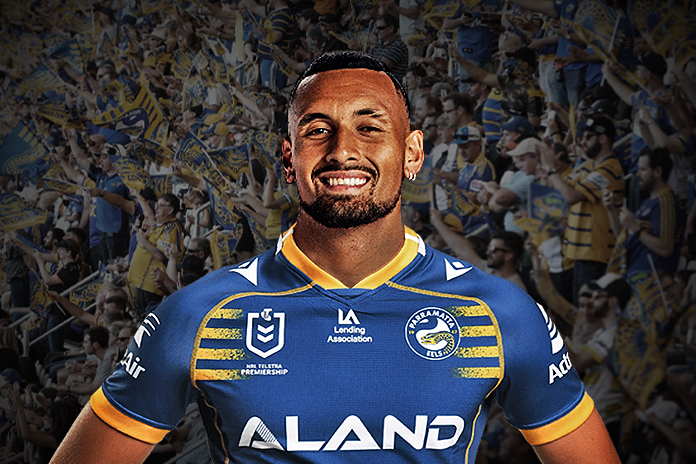 You heard it, you witnessed it, you marvelled at it. After trouncing the premiers twice in the same calendar year when no other team could come close to beating them, it’s official. PARRA ARE BACK!

If you took the first half of Friday’s win over Penrith on its own, removed from the context of the season, or even the rest of the game, you’d probably think the Eels were a top four team.

Yes, Nathan Cleary was sent off, but that likely wouldn’t have happened if the Eels weren’t hitting the afterburners and rolling downhill with a stadium full of momentum behind them as the Panthers reeled in shock.

It was one of those moments where everything clicks and we all suddenly remember why we thought the Eels were title contenders way back in March.

When the stars align for Parramatta, everything works and everyone is playing at their best, they are one of the most explosive and entertaining teams in the competition.

And the way they did it, too – hitting back immediately after going behind, followed by a 40-20 as a hyped-up Mitch Moses fist pumped the air, you could feel the momentum not just shift but slip entirely from Penrith’s grasp. The Eels had scored two quick-fire tries and were steaming towards a third before Cleary got sent from the field.

Before and after that moment, the Eels were playing that rare breed of cohesive attacking football that we all know they’re capable of but have so rarely delivered in 2022.

But despite the 26-point lead they carried into the sheds at halftime, despite the raucous home crowd who were feasting on the atmosphere and despite being a man up – Parramatta lost the second half 6-4.

After burning the Panthers alive in the first 40 minutes, it seemed to be a case of ‘job done’, and the Eels shutting up shop for the night.

You might think ‘So what? The damage was done, the game was won’ – and that’s one way to see it. But just because you have no ambition, it doesn’t mean your team shouldn’t.

While the Eels spent the first 40 minutes reminding us all just how damaging they can be, the second 40 showed us why they’re unlikely to make an imprint on the finals and are still a chance to miss out on a top eight spot.

They reminded us why, despite everything in their favour, Parramatta fans still have so little to celebrate after nearly four decades, despite what’s appeared to be a gaping premiership window these past few years.

Could Parramatta be blamed for taking the foot off Penrith’s throat? They were 26 points up and had a man advantage. With a number of key games coming up, they may have already been thinking ahead.

But would the Melbourne Storm relent? Would the Rabbitohs? The Sharks? The Broncos had a handy lead on Parramatta just a week before and went on with it, showing their opponent respect by hammering them further.

A good team gets to a big lead at halftime, but a great team keeps plugging away. A great team wouldn’t let up, especially when for-and-against could have such a big role to play in shaping the finals.

A great team would play with the same intensity and professionalism no matter what point in the game they’re at or what the score is.

Even if the team isn’t great, that kind of effort and commitment can make more of an impact than a talented bunch of individuals who are apathetic at best.

A bad team switches off and loses 40 minutes of football to a team with a numerical disadvantage.

The Eels currently have the worst points differential in the top eight (+38). With less than 50 points between Parramatta and any of the other teams ranked from fifth to eighth, it should be seen as an opportunity blown, despite the two points.

You can’t look at Parramatta’s best team on paper and tell me that isn’t a top four side. Put your grudges aside. Some of the personalities they have are divisive, sure. But so was Lleyton Hewitt, and he was still a champion.

So, to a point, is Nick Kyrgios – although he’s prone to giving up or undermining himself the moment the tide starts to turn against him.

Are Parramatta the Nick Kyrgios of the NRL? Incredibly talented, laden with potential and at his best an absolute contender with the giants of the game, so often undone by no one but himself?

The kind of team that lots of people want to fail because it proves them right about their preconceived notions about the individuals?

A team with a lot of talent, a lot of flash and a lot of passion as well as a perception of arrogance? The kind of team that divides opinion between effusive praise and derisive snorting? We might be on to something…

But this isn’t about whether the Eels are a likeable bunch, it’s about their roster.

They’ve got arguably the best player in the game right now (behind Ben Hunt) in Isaiah Papali’i – but he’s going. They’ve got a world-class spine including perennially under-rated rake Reed Mahoney – and he’s going as well.

The rest of the team is immensely talented, but if you were to try and identify the club’s most consistently impactful players, the guys for whom the gap between their best and worst games is tiny, it’d be those two (and maybe Junior Paulo) – but they’re both going.

That’s not a sign that the club is doomed by any means – they’ve already secured the services of Josh Hodgson as a replacement No.9. and they’ve secured Paulo, Gutherson and Matterson to long-term deals.

But every time a quality player leaves, the process has to take a few steps back – and it’s not always guaranteed to tread the same path back to where they were.

Parramatta do many things well, but if you want to know what they do consistently, it’s worth looking back at Brad Arthur’s comments following the shock loss to the Tigers all the way back in April.

“Our concentration around the details of the game wasn’t good enough,” Arthur said.

“We lacked a fair bit of patience, we were trying to score off every play. When you’re not prepared to build pressure that shows a lack of respect for ourselves and the opposition.

It’s the same kind of rhetoric that’s followed every other game the Eels have lost but should have won – and there have been a few.

But if we’re after the perfect representation of attitude for the Eels in 2022, we need look no further than the 34-4 capitulation to the Bulldogs. Despite looking apathetic at best for the majority of the contest, the Eels broke the line in the 71st minute and Mitch Moses sauntered towards the posts.

Thanks to Moses’ casual, almost entitled approach to the four-pointer, Matt Burton was able to rush up from behind and knock the ball loose. At the time, the Dogs led by 24 points – and still showed more passion and intent than their much more highly-rated opponents.

That one brief moment has ultimately epitomised the Eels in 2022. So full of talent, so able to create opportunities, yet so often undone by their own attitude and a perceived entitlement.

Brad Arthur says the team tries to score off every play in bad situations, yet as they showed against Penrith, it can be done – even against the best teams. The Eels have also shown that they can get down in a grinding contest if they have to.

But they’ve also shown they can get rolled by the worst, all in the same season.

Once again, with a real opportunity for a world-class lineup to show the NRL community that they’re ready to be an elite team, it’s like they just expect it to happen and aren’t prepared for committed resistance from a team that simply seems to want it more.

Hands go on hips, leaders berate their teammates on camera and Arthur is forced into the same post-game platitudes.

What’s the answer? Who knows. But if Nick Kyrgios can start to win hearts and minds and make a grand slam final, perhaps hope is not lost for the blue-and-gold.

It’s certainly running out, though.