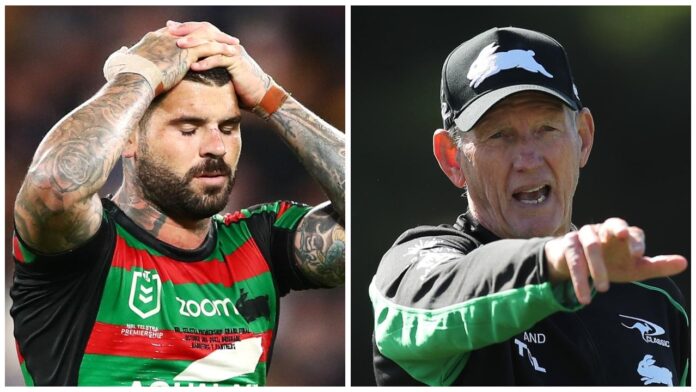 Despite both Wayne Bennett and Adam Reynolds' time at the burrow coming to a close after South Sydney's heartbreaking Grand Final loss, former Panther, and current pundit, Greg Alexander believes the loss of the latter will provide the biggest gut punch.

Although not diminishing the impact the 71-year-old Bennett has over his charges from the coaches box, Alexander stated on Monday morning that filling Reynolds' void next season will be a herculean task for the 2021 runners-up.

“It’s always difficult for sides to lose key players and continue along the same lines,” the legendary halfback said on SEN 1170.

“I’m thinking Adam Reynolds will be a bigger loss than Wayne Bennett."

With Souths ownership opting against offering the Redfern-raised Reynolds a multi-year deal, the man affectionately known as 'Brandy' suggested that the cardinal and myrtle club could well rue their decision.

“Adam Reynolds was for the second half of the year, to play like he did after he was rejected by his own club, was quite remarkable," Alexander continued.

“He wanted to stay at South Sydney, they offered him a one-year deal but he wanted more security.

“He’s signed with the Brisbane Broncos, but to replace Adam Reynolds the way he played for the majority of the year will be a difficult thing. Halfbacks do not fall off trees.”

While now aged 31, the heavily inked Reynolds' best years may well be behind him. However, as someone with an incredible knack to understand the role of those in the seven jersey, Alexander explained that the local junior still had plenty to offer his boyhood club.

“There’s just not that many halfbacks that can control a game like Adam Reynolds does,” the 1991 premiership player expounded.

“The loss of Reynolds will cost South Sydney more than the loss of Wayne Bennett."

In spite of his deployment at full-back during Sunday night's decider, young Rabbit Blake Taaffe looms as Reynold's replacement in the halves under incoming coach Jason Demetriou.

But be that as it may, the 56-year-old eluded to the fact that the deck may still require reshuffling ahead of the 2022 season.

“Whether Cody Walker moves across to seven and plays a different type of role and Blake Taaffe comes and plays five-eighth … they’ve still got a side, but it’ll be tough to cover the loss of Adam Reynolds," Alexander said in finality.

Should Demetriou opt against moving the fellow Souths junior further up the ground next season, the former assistant coach could well pair ex-Bronco Anthony Milford with the incumbent Walker.