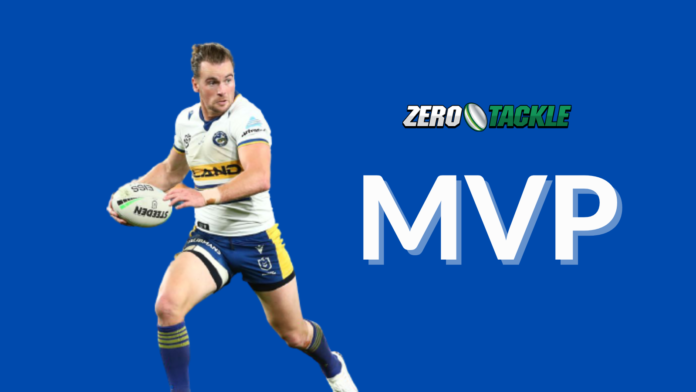 Round 18 saw another exciting round of NRL, with a number of upsets as well as statements made by the best.

With the 2021 NRL Premiership season starting to well and truly heat up en route to the finals, we take a look at our Zero Tackle MVP votes for Round 18.

The Eels had an emphatic victory over the Titans in their opening trip to Queensland, adding to their tilt of a top-four finish.

Superstar fullback and MVP leader Clint Gutherson was at his best once again, while Ryan Matterson played a key role throughout.

The Sea Eagles were able to handle the Dragons with some comfort as both squads played undermanned for separate reasons.

Roosters halfback and teenage sensation Sam Walker led the way for the Chooks in their victory over the Cowboys on Saturday.

With Drew Hutchinson having an inspired outing, the victory adds to the Tri-colours' push for a stronger finish near the summit of the league.

The Raiders notched up another much-needed win as they begin to turn their season around, with new cult-hero Xavier Savage dominating in his third career match.

Corey Harawira-Naera was also among the best, as Ricky Stuart's side now eye a finals finish.

The Storm were as dominant as ever in their clash with the Knights, as the ever-reliable Nicho Hynes put on a jaw-dropping display.

A stellar opening half eventually saw the Storm end the match with six different try-scorers for the evening.

A competitive start by the Warriors soon vanished as the Panthers picked themselves up and quickly extended the gap against the Warriors.

New recruit Matt Lodge was sensational for the Auckland-club, pairing well with Addin Fonua-Blake in the forward pack, while Tyrone May stood up for Penrith.

A scary start was soon put to bed for the Tigers, with Wests adding further woes to the Broncos in a high-scoring affair.

A fiery affair once again between these two sides saw the Rabbitohs manage an eight-point victory over their Belmore rivals.

Cody Walker was once again on his game, while Keaon Koloamatangi continues to impress.