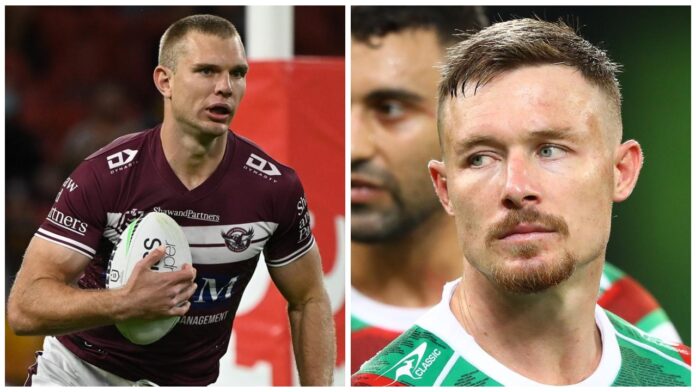 Speaking to the media ahead of the all-Sydney battle to pluck the first pass to the 2021 Grand Final, the incumbent Blues rake suggested that a total shutdown task may be too large for his charges.

“You can’t stop the great players – you just have to try and limit what they do,” Cook was quoted by Fox Sports.

However, should Souths be seeking a blueprint on how to at least curb the Mona Vale flyer, they won't have to cast their eyes back too far given the Storm's ability to shackle Trbojevic in their qualifying final win over Manly earlier this month.

With Melbourne proving able to hold the 24-year-old to his season's lowest amount of metres made (151) and stop him from crossing the chalk for just the third-time this year, Cook suggested the Redferners would be looking to take a leaf out of their southern neighbour's book this weekend.

“We saw Melbourne do that (with Turbo) a few weeks ago, even though Manly were a little bit off their game," he continued.

“You can watch other teams and try and learn from what they’ve done.

“He (Tommy) is a freakish player, and he is one of the red-hot favourites for the (Dally M), too.”

In an effort to further strengthen their chances of completing Rugby League's 'mission impossible', suspended star Latrell Mitchell has reportedly been training as a mock version of the Sea Eagles' fullback to ready the Rabbits' defensive line.

Although unable to lace the boots for a second-successive September, Mitchell has proved an invaluable resource in Cook's eyes.

“We’ve got a young fullback here who isn’t too bad and has got a bit of free time on his hands in Latrell,” he said.

“He has been quite a handful at training, but that is what we wanted.

“We know what kind of shapes Manly play, so where we can mimic those plays is what we try and do at training.

“That is when the other players in the squad become so important. The standard they set for us at training, and the likes of Latrell really testing us, are going to make us better on the weekend.”

Upon returning to the penultimate stage of the season for the fourth-time in his career with Souths, Cook was having none of the suggestion that is was his past lulls that saw the cardinal and myrtle clad side fall short of their 22nd premiership.

“I think those past games is just people trying to find reasons why we lost,” he said defiantly.

“If they can find me a reason of what I actually did wrong, let me know.”

With these heartaches against Sydney, Canberra and Penrith never far from his mind, the often vaunted beach sprinting champion suggested that the scars had allowed him to grow as a player.

The 30-year-old also suggested that he was glad his side had earned a week off between finals so as the recuperate following the hard-fought win over the Panthers in their own qualifying final.

“I think so; I’d like to think I’ve learnt from them [the previous preliminary final losses],” Cook revealed.

“I definitely feel pretty relaxed going into this one. I’m confident with where the team is at and I’m feeling nice and fresh.

“The body is feeling good.

“I think the rest has been great. It has been a long season for us all and we’ve had some representative football in the middle as well.

“We are in a great position this year where we earned the right to get that week off before the prelim, which we haven’t been able to do in the past couple of years.

“Hopefully everyone has made the most of it. We’ve been keeping the standards at training high, so most of the hard work is done now.”

Cook and South Sydney will be looking to sew up a chance to vie for another competition win when they take on Manly at Suncorp Stadium this weekend.