The Wests Tigers have officially confirmed that they’ll back veteran prop James Tamou as he seeks to get the grading of his contrary conduct charge altered.

Tamou was handed the charge after being sent off for dissent in the final minute of the Tigers’ shellacking at the hands of the Sydney Roosters on Saturday – and everyone has had their say since.

Phil Gould thinks Tamou should be given an amnesty to play the last two games simply because he’s been such an upstanding citizen – and he’s been lambasted for that opinion from many corners, because the NRL judiciary has never made a sentimental exception just to ensure a respected player can actually finish their career without being suspended, have they?

Okay, so maybe they have. But they wouldn’t do it twice in a matter of years, would they?

Let’s take our minds back to the distant days of 2015. While everyone remembers the grand final – and so they should – few seem to remember the lead-up.

Brisbane Broncos icon Justin Hodges had been cited by the Match Review Committee (MRC) for a dangerous throw on former Sydney Rooster Aidan Guerra in the second half of the preliminary final one week before. It ended something like this:

While this tackle itself wasn’t enough to bring suspension into play, two prior (but non-similar) incidents earlier in the year meant Hodges was going to miss the Grand Final.

If you look at the incident in isolation now, without the context of the grand final next week or Hodges’ career winding down, the only question you’d have is how he actually escaped punishment. Had a tackle like that been made in 2022, he could have been sent off – but that’s not the point.

In the aftermath, the Telegraph’s David Riccio shared a story about Kurt Drysdale, who suffered spinal damage after a tackle gone wrong, not dissimilar to the one Hodges made. By acquitting Hodges and putting the blame on Guerra, the NRL was said to be setting a dangerous precedent.

You might not agree with that assessment, and ultimately Brisbane lost the game anyway, but there’s little to no doubt that had it not been a grand final or the last game in Hodges’ storied career, he would’ve spent a week or two on the side-lines.

The rules around those kinds of challenges have only been strengthened in recent years, as have many others. But does that strengthening of the rules help with universal approaches to charges and sentencing?

It must, because no other player has been given the benefit of the judiciary for sentimental reasons since that dubious day.

Three years later, Melbourne Storm and Queensland legend Billy Slater was placed on report for what seemed like a shoulder charge on Sosaia Feki during another heated preliminary final. 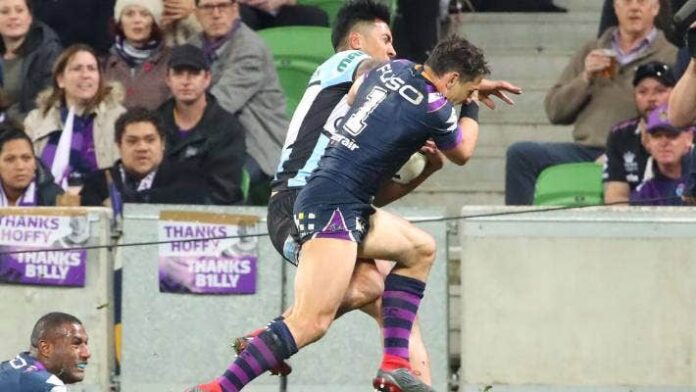 Yes, Slater was coming in at pace – and yes, Feki shifts to his right foot which brings him into the collision, but by the letter of the law it looked like Slater could be in trouble.

And the key detail – the grand final was to be Slater’s last in the NRL. If he was suspended, he wouldn’t get the opportunity to end a highlight-laden career on a high. He received plenty of support from opposition coaches and players as well, though it's hard to tell in hindsight just how much of that was due to his legendary status in the modern game.

The hearing took almost three hours, including a solid hour of deliberation by the panel, but in the end the decision was the same. Billy Slater would be free to play.

Once again, the team that received the judiciary’s benefit lost the game. Once again, opinion on the internet and between television pundits was extremely divided. Once again there were questions over the precedent it was setting, and once again players who had suffered severe injuries in similar tackles were brought out by the media to make a point.

But ultimately, once again, there was a high likelihood that sentimentality had factored in.

James Tamou may not have the same profile of Slater or Hodges – he’s always been an understated type of big man. But he’s won a premiership, he’s played over 300 games and represented both his state and his country - a proven performer at the highest level.

He’s been a constant fixture in the competition for the better part of two decades and you’d be hard pressed to find anyone – either a team-mate or a general rugby league fan – with a bad word to say about him. He even volunteered the help the RFS as fires devastated NSW in 2019.

But should he be the beneficiary of judicial mercy, just because he’s a nice guy?

Sure, the way he got sent off would seem contrary to that notion – but he verbally abused the ref, and that makes things different.

Where one could argue that Hodges and Slater were involved in subjective incidents that happened in the blink of an eye and required an interpretation of the rules, there's nothing subjective about what Tamou did. It's on the record. We all heard it. You might even agree, but that doesn't change the fact that these actions have already landed other players in trouble this year.

All he can do is ask for leniency, point his history and reputation and hope for the best.

He’s not playing his last game in a grand final, his team are rooted to the foot of the ladder and all he wants is the opportunity to play what’s likely to be just one more go around in the game he’s given his life to.

There are plenty of different circumstances in Tamou’s case compared to the other two, I'm not arguing that.

But if the NRL has been consistent enough in the past to allow two veterans of the game go out on their own terms regardless of what they did the weekend before, then surely James Tamou deserves the same consideration.

But if he doesn't get it, he's already shown that he'll be man enough to take it.