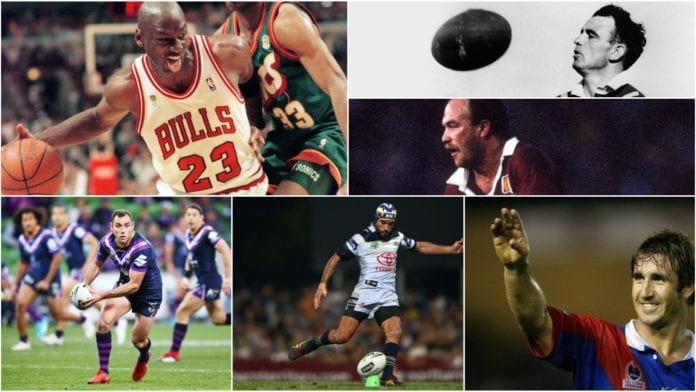 The term GOAT (Greatest Of All Time) is trending after the release of The Last Dance - a 10-episode NBA documentary series about the 1997-98 Chicago Bulls and star player Michael Jordan.

Jordan is widely considered the GOAT of basketball, although some might argue its LeBron James, Bill Russell, Wilt Chamberlain or Kareem Abdul-Jabbar.

It gos us wondering: Who is Rugby League's GOAT? Below is who we think are the five main candidates. Scroll down to vote on who you think the Rugby League GOAT is.

Lewis, better known as The King', is the man perhaps most synonymous with State of Origin football, captaining the Maroons 30 times between 1979 and 1991 and winning a record eight Man of the Match awards in Origin contests.

Lewis also captained Australia and was named as an Immortal. Lewis was also the inaugural captain of the Brisbane Broncos in 1988 and has a statue outside of Suncorp Stadium, known as Lang Park during his playing days. Perhaps Lewis's greatest honour was being named five-eighth in the Team of the Century in 2008, while his legacy lives on today with the Wally Lewis Medal being awarded to the player of the series for State of Origin.

Clive Churchill, best known today for the award named after him given to the best player in the NRL Grand Final, was someone who revolutionised the fullback position in the 1940's and 1950's.

Churchill introduced attacking flair to the position and this flair led to five premierships for him and the South Sydney Rabbitohs. Churchill also retired as the Kangaroos' most capped player and captained Australia at the first Rugby League World Cup in 1954. In 2008, Churchill was named fullback in the Team of the Century.

Cameron Smith has become NRL's 'Mr Evergreen' since making his debut for the Melbourne Storm in 2002. To date, Smith has played a record 413 games, including two premierships in 2012 and 2017.

Andrew Johns starred for 14 years at halfback for the Newcastle Knights, winning two premierships in 1997 and 2001 and setting a club-record 249 appearances. Despite retiring at the age of 32, Johns set many records, including retiring as the Australian first-grade points record-holder, being one of four players to win the Golden Boot more than once and being one of two to win the Dally M Medal three times.

After retiring in 2007, Johns was named in 2008 at halfback in the Team of the Century and Rugby League Week named him as the greatest player of the previous 30 years. In 2012, Johns received the games' greatest honour being named an Immortal.

Johnathan Thurston is widely acknowledged as the premier halfback of the 2000s. Thurston won many accolades over his 16-year career from 2002 to 2018, including two premierships in 2004 at Canterbury and 2015 at North Queensland. Most notable amongst Thurston's accolades include a record four Dally M Medals and a record three Golden Boot awards.

Thurston was also the only player to play all 24 games during Queensland's record eight straight State of Origin series victories, finishing his career with a record 36 consecutive appearances for the Maroons. With his kicking and try-scoring abilities, Thurston also holds points records for both the Kangaroos and Queensland.

VOTE IN THE POLE BELOW 👇