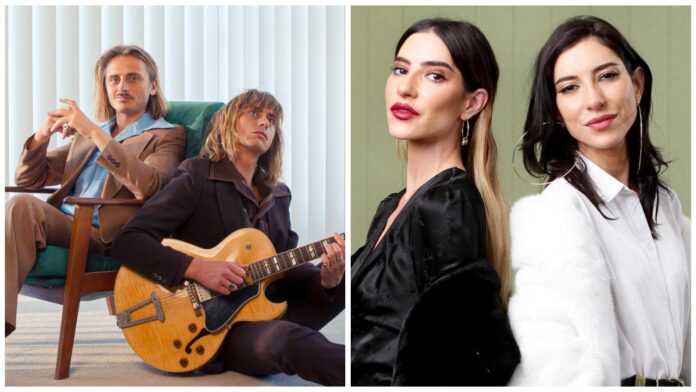 The Veronicas highlight an impressive quartet of Aussie music stars as the NRL announce the pre-game entertainment for the 2021 State of Origin.

Lisa and Jessica Origliasso will line up as the pre-game entertainment for the opening State of Origin clash at the MCG. Proud Maroons fans, the ARIA award winning music icons promise to do their state and the league proud on the 9th of June.

"It's a dream come true to play at this iconic sporting event." the proud Brisbanites said.

"We know the vital role music plays in hyping and motivating audiences and players, so we intend to show Australia that two girls from Brisbane can do it loud and proud at the MCG."

For game II, Queensland-based group Sheppard have the honours of performing in front of a packed Maroons crowd at Suncorp Stadium.

With smash hits like Geronimo, Coming Home and newly released Symphony, the indie-pop band are pumped to play in front of a packed crowd once again.

"It’s such an honour to have been offered the pre-game entertainment for the State of Origin." siblings George, Emma and Amy Sheppard said.

"We love a hometown crowd, we love Queensland, and after the year we've all had, to be back playing and cheering on our team at Suncorp Stadium, it's a bit of a dream to be honest."

To round out the trio of blockbuster games, indie up and comers Lime Cordiale will perform in front of a Blues crowd out for revenge after last year's series defeat.

Stadium Australia will be buzzing pregame as they will be also joined by new to the scene Aboriginal rapper JK-47 also performing.

JK-47's has risen into the Aussie limelight with his debut album "Made For This" which was released on the 4th of September last year, as well as his Like a Version cover of 2Pac's Changes that he performed in February of this year.

State of Origin is fast approaching, with the opening clash at the MCG on the 9th of June.