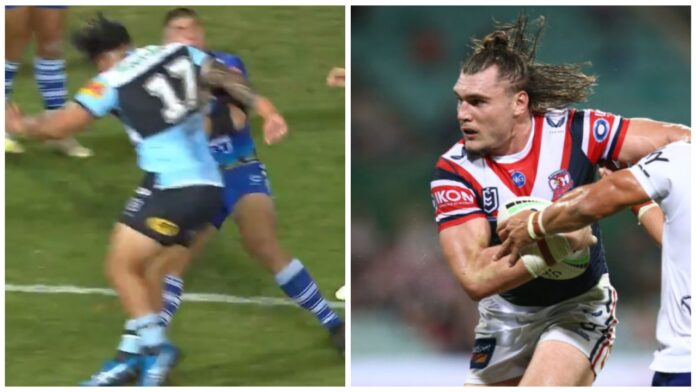 It's been a few weeks but we're unfortunately back talking about referees. This time it's not the six-again but instead inconsistency over shoulder charges and sin-bins.

Siosifa Talakai was sat for ten minutes and will miss four games for a charge near an exact same tackle that saw Angus Crichton lauded, applauded and in highlight reels.

Jordan Pereira found himself miss ten minutes for a similar incident that saw Jack Hetherington sent off just last weekend. Both face hefty suspensions, although Dogs fans saw hopes of a late comeback dash due to the 25-minute man disadvantage.

Hey @BuzzRothfield can u explain to me how talakia is facing a 6 week suspension and Angus Crichton gets off for the same tackle. Where’s the consistency??

Mikaele Ravalawa was penalised for a shoulder charge that will cost him a few weeks, but didn't lead to a sin-bin.

You can forgive fans for throwing their hands in the air at each decision. It feels as though you're at the whim of a decision that could go literally either way on any given day.

Speaking on Rugby League Outlaws this week, Dan Nichols and Terry Mortimer discussed each incident and presented queries into the inconsistencies.

"There were a couple over the weekend I'm indifferent about," Mortimer said on Rugby League Outlaws.

"Obviously the Talakai shot has raised a little bit of controversy, I didn't think it was a five-week penalty.

"I didn't think it was worth being sin-binned for, it thought it was a great shot ... the Dogs players didn't react.

Siosifa Talakai spends 10 minutes in the bin for this MASSIVE shoulder charge!

"I think generally a bad tackle will bring a bad reaction from the opposition."

Pereira's hit on James Tedesco also drew calls for concern, with the Dragons winger remaining on the field after ending the Roosters superstar's night.

"It was high, late, that could've been sent off after seeing Jack Hetherington sent off ... now that's a sin-bin," Mortimer added.

Nichols went on to agree, while also shining light on the verdicts for Crichton and Warriors youngster Josh Curran, who was sent off for an incident involving Storm winger George Jennings on Sunday.

"[Crichton's tackle] was exactly the same as Talakai's ... it just didn't have the impact, the whiplash wasn't there," Nichols said.

"Then [Josh] Curran get's sin-binned for nothing."

Josh Curran has been put on report and sent to the sin bin ❌ Did they make the right call here?

Nichols raised further questions over the inconsistency of the NRL Judiciary, with Rabbitohs fullback Latrell Mitchell being hit with a four-game ban that was matched with some outcry from fans.

"[Mitchell] has to do his time," Nichols said.

"Doesn't matter if it's a rookie making his debut or the best player in the game ... one rule for all.

"You have to treat each incident as it is, but you look at the weekend and there were three incidents that were exactly the same, two sat down and one didn't."