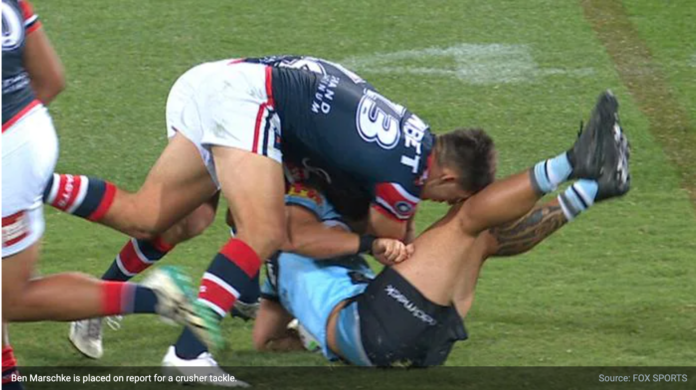 The incident occurred in the 29th minute of Saturday night's clash at SCG, with the Match Review Committee grading it as a Grade One Crusher Tackle.

If Marschke takes an early guilty plea he will miss just one match, while if he unsuccessfully fights the charge, will miss two games.

The Tricolours have until Monday at 12pm to enter their plea over the incident.

It comes ahead of the Roosters' upcoming clashes against the Storm and Dragons and creates a hooker crisis at the club, with Jake Friend retiring this week due to ongoing concussion problems.

The Roosters released the following statement on the matter.

"Following the Sydney Roosters Round 5 match against the Cronulla-Sutherland Sharks, Ben Marschke has been cited by the NRL Match Review Committee", the statement reads.

"Marschke was charged with Grade One Crusher Tackle resulting from an incident in the 29th minute of the match.

"The charge carries a base of 200 points. Should the Club elect to enter an early plea, Marschke will receive 150 points and be unavailable for one match. If found guilty at the panel, Marschke will be suspended for two matches.

"The Club has until Monday at 12pm to enter their plea."